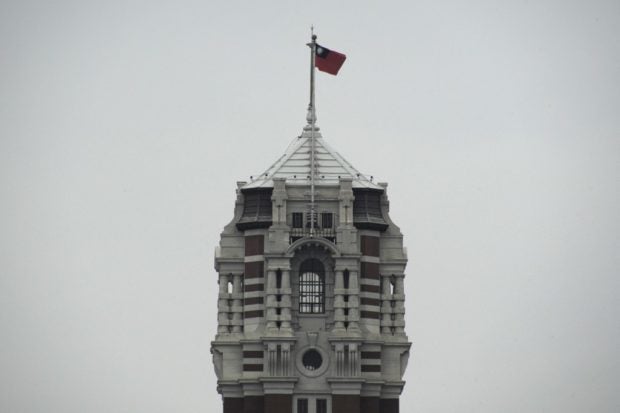 A Taiwan national flag flutters on top of Taiwan’s Presidential Offices in Taipei on May 24, 2022. AFP

TAIPEI — Taiwan’s defense ministry said on Thursday that unidentified aircraft, probably drones, had flown on Wednesday night above the area of its Kinmen islands and that it had fired flares to drive them away.

Taiwan has been on alert as China conducts a series of military exercises in response to a visit to the island this week by U.S. House of Representatives Speaker Nancy Pelosi.

Major General Chang Zone-sung of the Army’s Kinmen Defense Command told Reuters that the Chinese drones came in a pair and flew into the Kinmen area twice on Wednesday night, at around 9 p.m. (1300 GMT). and 10 p.m.

“We immediately fired flares to issue warnings and to drive them away. After that, they turned around. They came into our restricted area and that’s why we dispersed them,” he said.

The heavily fortified Kinmen islands are just off the southeastern coast of China, near the city of Xiamen.

“We have a standard operating procedure. We will react if they come in,” Chang said, adding that the alert level there remained “normal”.

Chang said he believed the drones were intended to gather intelligence on Taiwan’s security deployment in its outlying islands.

Last week, Taiwan’s military fired flares to warn away a drone that “glanced” its Matsu archipelago off the coast of China’s Fujian province and was possibly probing its defenses, Taiwan’s defense ministry said.