How is China punishing Taiwan for the Pelosi visit? | Inquirer News 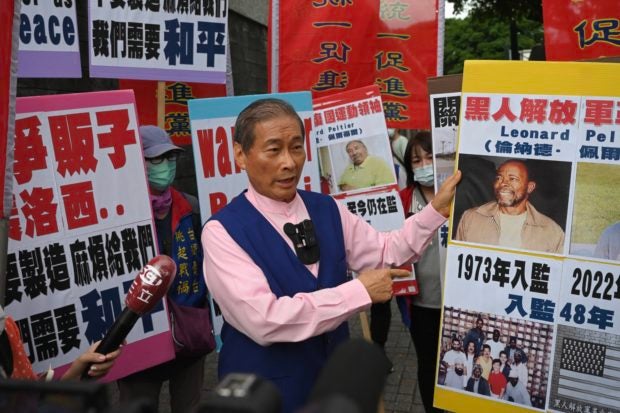 BEIJING — China has launched a volley of trade curbs against Taiwan in addition to live-fire military drills, as US House Speaker Nancy Pelosi visited the island despite Beijing’s warnings.

China considers Taiwan its territory and tries to keep it isolated internationally, opposing countries from maintaining official contacts with the self-ruled democratic island.

After Pelosi became the highest-profile elected US official to visit Taiwan in 25 years, Chinese foreign ministry spokeswoman Hua Chunying said Wednesday the response will be “resolute, forceful and effective”.

Here are the measures China has announced so far:

The first response was announced swiftly: live-fire military drills in zones encircling Taiwan — at some points, within just 20 kilometers (12 miles) of the island’s shore.

The drills will include “long-range live ammunition shooting” in the Taiwan Strait, which separates the island from mainland China and straddles vital shipping lanes.

Taiwan’s defense ministry described the drills as “an irrational move to challenge the international order”.

Beijing cannot afford to be seen as toothless after ramping up the rhetoric ahead of Pelosi’s arrival, analysts said.

“It will be imperative for the Chinese regime to underline its nationalist credentials to its domestic audience,” said James Char, an associate research fellow at Singapore’s S. Rajaratnam School of International Studies.

“Beijing cannot be seen as weak by its own people.”

China on Wednesday also imposed curbs on the import of fruit and fish from Taiwan.

Its customs authorities said it would suspend some citrus fruit imports over alleged “repeated” detection of excessive pesticide residue.

It also banned the import of certain fish from the island, pointing to the discovery of the coronavirus on packages.

These bans came a day after Taipei’s Council of Agriculture said China had cited regulatory breaches in suspending the import of Taiwanese goods including fishery products, tea and honey.

It is not the first time Beijing has aimed at Taiwan’s agricultural products — it banned pineapple imports in March 2021, citing the discovery of pests. However, the move was widely seen as politically driven.

The moves are part of a “common pattern for Beijing”, said Even Pay, an agriculture analyst at consultancy Trivium China.

More disruptions of agricultural and food trade can be expected in the coming days, she added.

“When diplomatic or trade tensions are running high, Chinese regulators typically take an extremely strict approach to compliance… looking for any issues that can be used to justify a trade ban,” she told AFP.

The Chinese commerce ministry said in a separate notice that it would “suspend the export of natural sand to Taiwan” from Wednesday, without providing details.

Natural sand is generally used for producing concrete and asphalt, and most of Taiwan’s imported sand and gravel comes from China.

Beijing has ramped up pressure on Taiwan since President Tsai Ing-wen took office in 2016, as she views the island as a de facto sovereign nation and not part of “one China”.

The Chinese State Council’s Taiwan Affairs Office said Wednesday that it will punish two Taiwan organisations with close links to “die-hard” secessionists — the Taiwan Foundation for Democracy and International Cooperation and Development Fund.

Enterprises that have donated to the groups, such as Speedtech Energy and Hyweb Technology, will also be prohibited from working with Chinese firms.

Read Next
Russia’s Lavrov: Pelosi visit to Taiwan creates ‘annoyance’
EDITORS' PICK
Percy Lapid’s kin: ‘We demand that his cowardly assassins be brought to justice’
Nothing’s certain so here’s how everyday Filipinos can make the most out of their Plan B
Do all the things you do, faster
PNP vows to bring justice for slain Percy Lapid; says probe underway
House energy committee chair Arroyo bats for cheap electricity
‘Seniority’ requirement despite vacant posts in DOH bothers senators
MOST READ
Student stabs teacher dead in Samar town
Trixie Angeles quits as press secretary due to health reasons
Not rehired?: Trixie Angeles not on list of reappointed Cabinet execs
Final net satisfaction rating slightly decreases for Robredo, Sotto — SWS
Don't miss out on the latest news and information.