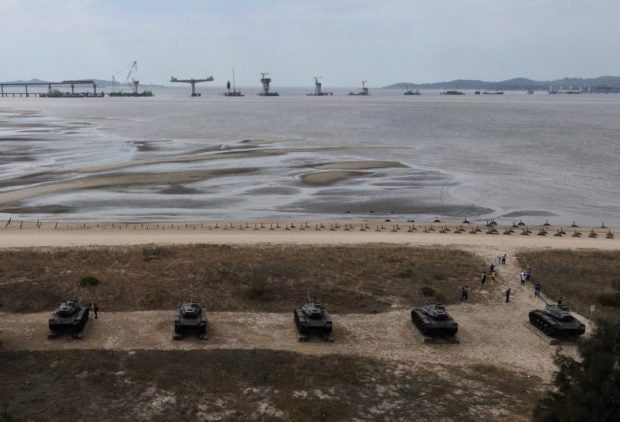 This photo taken on October 20, 2020 shows an aerial view of anti-landing spikes and retired tanks placed along the coast of Taiwan’s Kinmen islands, which lie just 3.2 kms (two miles) from the mainland China coast (in background) in the Taiwan Strait. AFP

TAIPEI — Ever since Communist China and Taiwan broke away from each other at the end of the Chinese Civil War in 1949 the waterway separating them has been a tense geopolitical flashpoint.

Just 130 kilometers (81 miles) wide at its narrowest point, the Taiwan Strait is a major international shipping channel and all that lies between now democratic, self-ruled Taiwan and its giant authoritarian neighbor.

Beijing has responded furiously to this week’s visit to Taiwan by US House Speaker Nancy Pelosi, issuing increasingly bellicose threats and announcing a series of military drills in the waters surrounding the island.

Historians pinpoint three previous moments when tensions within the Taiwan Strait boiled over into an acute crisis.

At the end of the Chinese Civil War, Mao Zedong’s communist forces had successfully pushed out Chiang Kai-shek’s Nationalists, who relocated to Taiwan.

The First Taiwan Strait Crisis broke out in August 1954 when the Nationalists placed thousands of troops on Taiwan-ruled Kinmen and Matsu, two small islands just a few miles from the mainland.

Communist China responded with artillery bombardments of the islands and the successful capture of the Yijiangshan Islands, about 400 kilometres north of Taipei.

The crisis was eventually defused but nearly brought China and the United States to the brink of direct conflict.

Fighting broke out again in 1958 as Mao’s forces conducted an intense bombardment of Kinmen and Matsu in a bid to once again dislodge Nationalist troops there.

Concerned that the loss of those islands might lead to the collapse of the Nationalists and Beijing’s eventual takeover of Taiwan, US President Dwight D Eisenhower ordered his military to escort and resupply their Taiwanese allies.

At one point, the US even briefly considered deploying nuclear weapons against China.

Unable to take the offshore islands or bombard the Nationalists into submission, Beijing announced a ceasefire.

Mao’s forces would still intermittently shell Kinmen up to 1979 but an otherwise tense stalemate set in.

It would be another 37 years before the next crisis.

In those intervening decades, both China and Taiwan changed considerably.

Following the death of Mao, China remained Communist Party-controlled but began a period of reform and opening up to the world.

Taiwan, meanwhile, began shaking off the authoritarian years of Chiang Kai-shek and evolving into a progressive democracy, with many embracing a distinctly Taiwanese — and not Chinese — identity.

Tensions exploded again in 1995 when China began test-firing missiles in the waters around Taiwan to protest a visit by Taiwanese President Lee Teng-hui to his alma mater university in the United States.

Beijing particularly loathed Lee because he favoured Taiwan declaring itself an independent state.

The US dispatched two aircraft carrier groups to push China into backing down and Lee won the election by a large margin.

China has rights to take measures to protect ‘sovereignty’—Moscow