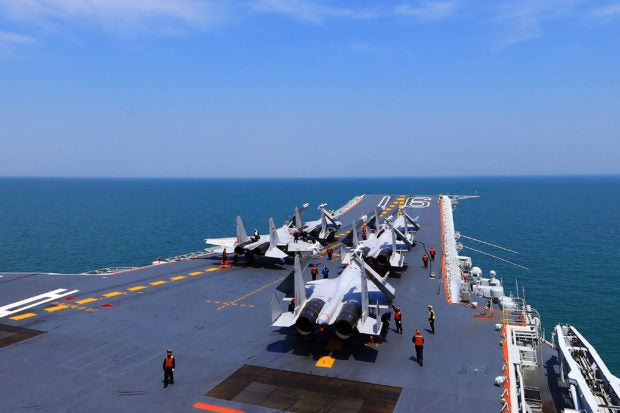 This photo taken on April 24, 2018 shows J15 fighter jets on China’s sole operational aircraft carrier, the Liaoning, during a drill at sea. AFP

TOKYO  — Japan has expressed concern to China over its military drills in waters around Taiwan, the top government spokesman said Wednesday as US House Speaker Nancy Pelosi visits the island.

Beijing has said its military exercises this week will include long-range live ammunition shooting in the Taiwan Strait, which separates the democratic island from mainland China.

“The maritime areas announced by the Chinese side as those to be used for military exercises… overlaps with Japan’s exclusive economic zone,” Japan’s Chief Cabinet Secretary Hirokazu Matsuno told reporters.

“Considering the live-fire training nature of this military activity, Japan has expressed concerns to the Chinese side,” he said, referring specifically to drills beginning on Thursday.

Parts of Japan’s southernmost island region Okinawa are close to Taiwan, as are islets at the centre of a long-running dispute between Tokyo and Beijing.

Beijing considers self-ruled Taiwan as its territory and has vowed to one day seize the island, by force if necessary.

Pelosi arrived in Taipei on Tuesday on a trip that has sparked fury from China’s leaders, who have painted it as a provocation that threatens the fragile cross-strait status quo.

“Peace and stability in the Taiwan Strait are important not only for Japan’s security but also for the stability of the international community,” Matsuno said.

Japan expects issues surrounding Taiwan to be “resolved peacefully through dialogue”, he added.

Matsuno said the Japanese government was “not in a position to comment on Speaker Pelosi’s international visits”.

Leaders are “making arrangements” for Pelosi’s visit to Japan later this week, he added, but declined to give details. It will be her first trip to the country since 2015.