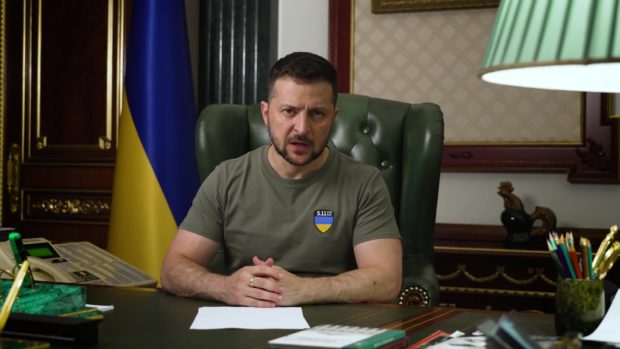 Ukraine’s President Volodymyr Zelensky says the security parameters around the first shipment of Ukrainian grain since the Russian invasion in February are primarily the responsibility of the United Nations and Turkey, after a landmark deal to lift Moscow’s naval blockade in the Black Sea. | PHOTO: AFP

KYIV — President Volodymyr Zelensky said on Monday that it was “too soon” to celebrate, after a shipment of grain left a Ukrainian port under a UN and Turkey-brokered deal.

“At this time, it is too early to draw any conclusions and make any forecasts,” he said in his daily video address. “Let’s wait and see how the agreement works and whether security will be really guaranteed.”

The first shipment of Ukrainian grain since the Russian invasion in February left the port of Odessa on Monday under the landmark deal to lift Moscow’s naval blockade in the Black Sea.

The five-month halt of deliveries from war-torn Ukraine — one of the world’s biggest grain exporters — has contributed to soaring food prices, hitting the world’s poorest nations especially hard.

Officials said the Razoni cargo ship, registered in Sierra Leone, was making its way through a specially cleared corridor in the mine-infested waters of the Black Sea with 26,000 tonnes of maize on board.

Other convoys are now expected to follow, respecting the maritime corridor and the agreed formalities.

Last month, Ukraine and Russia signed the breakthrough pact — the first signficant accord involving the warring sides since the invasion.