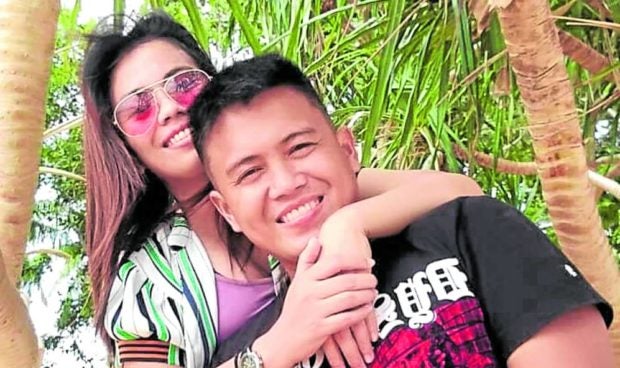 HAPPIER TIMES | Police Patrolman Jaypee Ramores, 32, and Armie Alcanzo, 28, are set to be married next year but tragedy struck. Ramores died on July 26 following an alleged hazing incident involving his fellow policemen in Masbate province. (Photo from the Facebook account of Jaypee Ramores)

LEGAZPI CITY, Albay, Philippines — Armie Alcanzo, 28, should have been brimming with excitement and up to her elbows in wedding preparations. Instead, she was in tears and mourning the death of her fiancé, Police Patrolman Jaypee Ramores.

Alcanzo was set to marry Ramores next year. But their plans turned to dust when news came that the 32-year-old police officer died on July 26 in an alleged hazing incident involving his fellow cops while based in San Jacinto town, Masbate province, as a member of the Philippine National Police Regional Mobile Force Battalion 503rd Maneuver Company.

“My future husband strove to pass the board. He struggled just to enter PNP and then this? His dreams took his life,” Alcanzo said. According to Alcanzo, Ramores failed more than 10 times in the criminology board examination but these missed chances became his motivation to achieve his dream of becoming a policeman.

Alcanzo, a courier company employee in Bicol, said that every time Ramores failed, he would look for a job to save for the cost of another review for the exam.

He also took on so many odd jobs to help his family, including selling kakanin (rice cakes) with his mother and working as a baggage boy in a public market in his native town of Talisay in Camarines Norte province.

Finally, in June 2019, he passed the criminology board exam. He entered the PNP in 2020. Ramores’ best friend Rodante Seco, 36, operations manager at a company based in Batangas province, said the young cop was a good son.

He met Ramores while they were both criminology students in Daet, the provincial capital of Camarines Norte.

Ramores’ family believed he was a victim of hazing by the other policemen in his unit because his body had severe bruises, cigarette and candle burns, and wounds on his knees and feet. Seco, a resident of Basud town in Camarines Norte, however, said Ramores never showed signs of being abused or stressed in his new assignment in Masbate.

“We last met during my birthday [on] July 18. He was happy, always laughing. He said he wanted to build a fishpond so the next time we both come home (in Camarines Norte), we would fish,” Seco said.

Ramores had wanted to earn enough money and build a house for his family.

In 2019, Ramores applied to the special program for employment of students offered by the Department of Labor and Employment and was assigned at the Talisay police station as a striker. As such, he was tasked to encode police clearance and assisted in other clerical works at the station, said Cpl. Julius Taldo of the Talisay police.

“He’s very kind and hardworking. He always looks for sideline jobs to save for another board exam review,” Taldo said.

Taldo said Ramores told them he tried his best to pass the board exam before he reached 30, the age limit for PNP recruitment. He was 29 when he passed the exam.

Last year, he gave his first Christmas bonus to his mother to build a balcony in their house. “Our mother requested a balcony that could be used for family gatherings, especially with her grandchildren. But [the money was instead] used for his funeral,” said Liezel Getuya, elder sister of Ramores.

Police probe death of Masbate cop due to alleged hazing