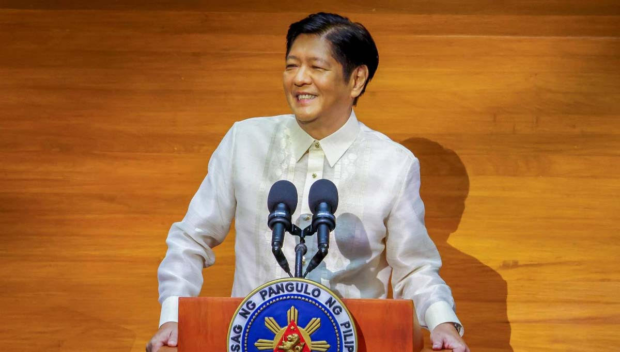 President Ferdinand Marcos Jr. during his first State of the Nation Address, July 25, 2022. (Photo from the PBBM Facebook page)

MANILA, Philippines — President Ferdinand Marcos Jr. has vetoed a bill granting tax exemptions to the honoraria, allowances, and other benefits given to election workers, most of them public school teachers, Malacañang announced on Saturday.

While the intent of the reconciled Senate Bill No. 2520 and House Bill No. 9652 was laudable, the president said in his veto message to Congress on Friday that it would be “inequitable to other persons performing similar activities or services.”

He said the proposed law would counter the objective of the government’s Comprehensive Tax Reform Program “to correct the inequity in the country’s tax system and negate the progressivity of the reforms introduced” by Republic Act No. 10963, or the Tax Reform for Acceleration and Inclusion (TRAIN) law.

“Moreover, the studies of pertinent government agencies on the revenue loss is too substantial an impact to be foregone,” Marcos said.

For this year’s elections on May 9, the honoraria and allowances of those who served were to be subjected to a 20-percent withholding tax.

Marcos has so far vetoed five bills in his first month in office, four of them he justified by citing either potential revenue losses or unnecessary government expenses.

On his first day in office, Marcos vetoed the bill creating the Bulacan Airport City Special Ecozone, pointing out that granting tax perks to a proposed special economic zone would “significantly narrow our tax base” which was not “aligned with the government’s objective to develop a tax system with a broad base and low rates.”

The president later vetoed the bill on strengthening the Office of the Government Corporate Counsel because of “overbearing” provisions, particularly the excessive grant of remuneration, incentives, benefits, and allowances and honoraria “that violates the principles of equity and standardization.”

No to PTSB as well

The proposed measure would have given the government corporate counsel the same salary as that of his boss, the secretary of justice, Marcos said.

He vetoed the bill on the tax exemptions for election workers along with the bill creating the Philippine Transportation Safety Board (PTSB).

Marcos said that the PTSB’s purpose of conducting an impartial and thorough investigation of transportation accidents was already being undertaken by various agencies under the Department of Transportation, the Philippine National Police, and the National Bureau of Investigation.

His veto message also on Friday said that one of the primary policies and priorities of his administration was to “enhance the government’s institutional capacity through optimal and efficient use of resources and strategic rationalization of the functions of government.”

According to Sen. Sherwin Gatchalian, coauthor of the Senate bill, about 647,812 Department of Education (DepEd) personnel rendered service for this year’s national elections, 319,317 of them as members of electoral boards (EBs).

Albay Rep. Joey Salceda, one of the principal authors of the House tax relief bill, said the exemption would only cost the government an annualized revenue loss of P138.6 million, which was “very reasonable given the job well done.”

But the president said that providing additional support to any sector was best addressed through “targeted budgetary spending rather than the tax system.”

‘Slap in face of teacher’

“The veto of this measure is a slap in the face of every teacher across the country who served the past elections dutifully despite long hours and higher risks of getting COVID-19,” Castro said in a statement.

“With the additional risks and longer hours of poll service that they had to endure, removing the 20-percent tax on their honoraria and allowances is only just,” she added.

According to the lawmaker, imposing taxes on the honoraria and allowances of poll workers “destroys the spirit and intent” of the Election Service Reform Act, or Republic Act No. 10756, to compensate for the hardships of persons rendering election service.

In the recent polls, around 1,000 police officers also served as special board of election inspectors (SBEIs) in Cotabato City and some parts of Maguindanao after teachers who were supposed to perform the job backed out due to threats to their lives.

Under Comelec Resolution No. 10727 on Nov. 10, 2021, teachers who render election-related services are entitled to the following honoraria: P7,000 for EB chairs; and P6,000 for EB members. A DepEd supervisor will get P5,000 and the support staff and medical personnel will receive P3,000.

They also get a travel allowance of P2,000, a communication allowance of P1,500, an “anti-COVID-19 allowance” of P500, and a minimum service credit of five days.

Poll workers are also entitled to death benefits amounting to P500,000, plus P200,000 for medical assistance if they suffer election-related injuries or illnesses.

Police officers serving in SBEIs have the same benefits but do not get service credits.

All poll workers who extended their work hours due to vote-counting machine and other technical problems receive an additional P2,000.

He said Congress wanted to give incentives to electoral board members by paying them “good rates” and exempting the income from taxes.

Pimentel was dismayed that Marcos overlooked the “difficult and dangerous” tasks that teachers and others in government perform during elections.

On the veto of the PTSB bill, Sen. Grace Poe, chair of the Senate committee on public services, disputed the grounds cited by Marcos.

She said it was “unfortunate” and lamented that the government’s fiscal position seemed to outweigh the loss of lives in transport accidents, which the measure sought to mitigate.

Poe said 483 maritime accidents occurred from 2016 to 2020 and 12,487 average deaths on the road occurred yearly during the same period.

The senator contradicted the President’s view that the PTSB would duplicate the functions and mandates of existing agencies, saying that an independent body to investigate transport accidents was a global standard.

“Having a (PTSB) will contribute to strengthening our transportation structure to improve mobility, put people back to work and spur the economy,” Poe said.