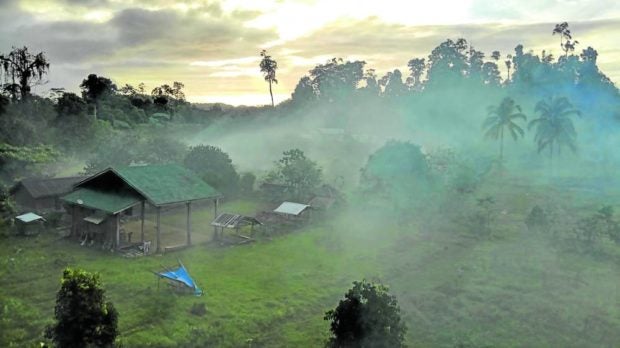 LOVING THE LAND MORE | Daybreak at a farmland cultivated by a Manobo community in Andap Valley, Surigao del Sur, where villagers are being taught to practice organic farming and produce their own fertilizers. Intercropping is also promoted to reduce the risk of plant disease and pest outbreaks while maintaining soil fertility. (Photo by KENNETH CADIANG / Contributor)

MANILA, Philippines — For years, volunteers of a social agricultural enterprise have witnessed farmers spend months toiling the field only for extreme rain to wash away their crops in an instant, leaving them with nothing to harvest and, often, nothing to eat.

Such is the cruel irony afflicting many smallholder farmers who bring food to Filipino tables yet “are the ones experiencing hunger,” said Mabi David, a member of Good Food Community (GFC), who has seen the struggle of Mountain Province growers against nonstop downpours that spoil crops or cause plant disease.

Weather changes, too, affect the quantity and quality of produce, shrinking the size of fruit and vegetables or giving them bad coloration. In GFC’s experience, harmful insect populations also tend to multiply as the skies become more unpredictable.

These show how drastic weather events attributed to climate change are threatening not only farmers’ yield but their own household food and nutrition security, David said.

Recognizing the impact of climate change on farmers, GFC is raising P1.2 million to support projects designed to make them more resilient, according to Charlene Tan, one of the people behind the enterprise.

The urgent need at the moment is rain shelters, she said.

“We’ve been through a lot of heartbreaks when farmers lost everything, all the crops were washed away and there was so much more damage (due to typhoons) than we can quantify. But rain shelters could at least give a portion of their land a fighting chance,” Tan said.

Cheaper shelters can be built using bamboo or shrub stems covered with thick UV plastic to protect the plants from the force of rain, she added.

Since 2012, GFC has fostered a “relationship with farmers more than the transactional purchase of produce,” as Tan put it, through community shared agriculture (CSA) and organic farming in provinces like Tarlac and Benguet.

In the past, farmers found it difficult to sell all of their produce in community markets, leading to crop wastage and pushing them further into debt.

Under the CSA setup, “subscribers” share the responsibility of farming by pledging or “prepurchasing” a farmer’s product at the start of the season or prior to harvest, Tan said.

Subscribers receive a portion of a farmer’s harvest on a weekly or monthly basis until the predetermined period ends.

As a result, farmers “can eat regularly because they have people who commit to a share of their harvest,” she said.

Almost everywhere else, however, farmers have no other recourse but conventional methods that “expose them to pesticides and chemicals that go into rivers and our bloodstreams,” Tan said.

With the worsening climate crisis, a collective of sustainable agriculture advocacy groups like GFC have started a movement to help farmers craft “agroecological” ways of farming and living.

According to the United Nations’ World Food Programme (WFP), food security in the Philippines is highly vulnerable to climate change, with nearly 10 million Filipinos working in the agricultural sector.

In November 2021, the WFP published a study that identified climate-related risks for food security in the country in the coming years: increased rainfall variability, rising mean temperatures and supertyphoons.

Over the past decade, agricultural losses in the Philippines have reached P290 billion as a result of extreme weather events.

“Pasture and livestock livelihoods are also at risk due to projected ambient temperatures of 30 degrees Celsius or more by 2050, which could cause heat stress and other climate-related hazards to livestock in the provinces of Apayao, Abra, Kalinga, Mountain Province, Ifugao, Benguet and Nueva Vizcaya,” the WFP study noted.

Experts believe food security is multidimensional and involves not only how food can meet energy and nutritional needs but also its ability to fulfill social and ecological purposes and uphold cultural meanings.

“When we say agriculture, we need to see the ‘culture’ aspect of the term as people-oriented,” said agricultural scientist Leo XL Fuentes, coordinator for Magsasaka at Siyentipiko para sa Pag-unlad ng Agrikultura (Masipag) in Mindanao.

He cited the precolonial history of farming in the Philippines, which showed evidence of self-reliant agriculture being practiced “based on the needs of local communities and daily subsistence—not on profits.”

It was only when the Spanish colonizers came when land ownership among the elite created an export-oriented and import-dependent agricultural system, which is the dominant setup today, Fuentes said.

For the past three decades, Masipag has been at the forefront of promoting sustainable agriculture, borne out of the “failures” of the “Masagana 99” project in the 1970s.

This led to farmers’ dependence on chemical fertilizers and pesticides, which proved unsustainable.

In response, Masipag has been crafting scientific and people-oriented alternatives to mainstream chemical-based farming.

The conundrum of food insecurity lies in the current agricultural system, Fuentes said: Hunger is not a problem of production but of distribution, where a large part of food production is used as animal fodder, agrofuel, or in the manufacture of plastic.

Based on the 2020 State of Food Security and Nutrition in the World Report, 59 million Filipinos were recorded suffering from moderate to severe lack of consistent access to food — the most in Southeast Asia — from 2017 to 2019.

“It has long been proven that our export-oriented and import-dependent agriculture is unsustainable. We need to cultivate a more sustainable agricultural system that primarily works to produce food, not profit,” Fuentes said.

Lumad, or indigenous communities in Mindanao, are no strangers to sustainable farming in harmony with nature, as reflected in their traditions.

In the Manobo community of Han-ayan in Andap Valley, Surigao del Sur province, volunteer teacher Kenneth Cadiang has seen how the villagers thank nature for their harvest, offering the first batch of produce to the “diwata” of the mountain range.

He said: “For them, without land, there is no life or food security … Farming is a collective work: Everyone participates in the production and everyone gets to eat.”

Conventional agriculture, according to the volunteer teacher, relies on external input like fertilizer, pesticide,s and seeds.

In Andap Valley, the Manobo practice an intercropping system: legumes are planted near corns, nightshade plants, and cucurbits to provide nitrogen to the soil for plants to grow. They also perform polyculture by planting diverse crops to manage pests and plant diseases, said Cadiang.

This is agroecology in practice: combining organic farming with sustainable agriculture and promoting self-reliance among farmers. In this setup, all fertilizers come from community-produced composts, while pesticides are discouraged to prevent pollution.

Single cropping is also frowned on in agroecology because it raises the risk of disease and pest outbreaks and makes the soil less fertile.

Another advantage of diversifying crops is it improves carbon storage in soils and helps in the mitigation of greenhouse gas emissions.

Unlike industrial farming that aims to increase single-crop yield for profits by using damaging chemical fertilizers, agroecology aims to strengthen all parts of the food system — from the seed and the soil to the table.

Agricultural scientists like Fuentes define agroecology as both science and movement, crafting scientific solutions to agricultural problems based on local contexts.

In Nueva Ecija, Masipag maintains a robust seed bank of organic rice varieties that can be planted based on suitability for upland or lowland ecosystems. The group also conducts community study sessions with farmers on the basic foundations of rice breeding.

For decades, many indigenous communities have used “kaingin,” or the traditional slash-and-burn farming system, that destroys local ecosystems and soil life.

Thus, Cadiang and other volunteers have introduced novel farming practices from Japan and Korea to lumad communities, such as the use of indigenous microorganism (IMO) and lactobacillus bacteria serum to help enrich the soil and make it more resilient to weather changes.

The IMO input conditions the soil to endure even hotter climates, said Cadiang, adding that volunteers were now practicing these in collective land cultivation farms, or “bungkalan,” in the communities.

Agroecology is also tied to issues of land ownership and food sovereignty that are common in bungkalan sites.

On June 9, some 83 farmers, artists, and journalists were arrested at a bungkalan activity in Hacienda Tinang in Concepcion, Tarlac.

The farmers were land reform beneficiaries of the 200-hectare farmland in Barangay Tinang under the comprehensive agrarian reform law in 1988. But to date, they have yet to receive their share of the land.

The bungkalan was their attempt to prevent the illegal sale or conversion of their land.

Donna Miranda of Unyon ng mga Manggagawa sa Agrikultura, one of those arrested, said the basic foundation of agroecology is control over land, where farmers themselves discover ways to maximize all available resources at no additional cost.

Because government subsidies to farmers are insufficient, food cultivators must find ways to make farming viable and help them produce food without going into debt, Miranda said.

“The principle of agroecology — or ‘likas-kayang pagsasaka’ — is tied to bungkalan, where farmers lack resources but are not short [of] collective resolve to cultivate and grow their agricultural land,” Miranda said.

From farming to fishing: Central Luzon groups push for reforms