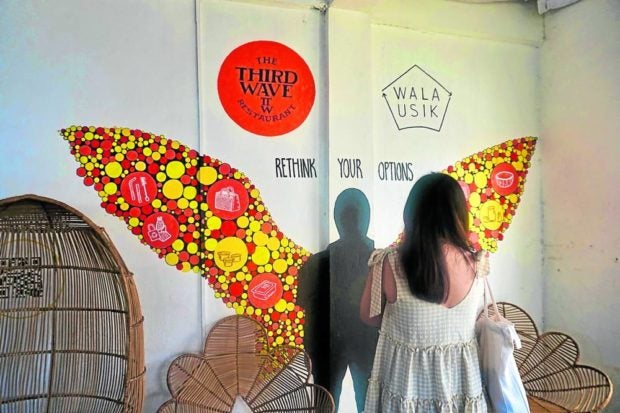 GREENER MINDSET ON THE MENU The Thirdwave Restaurant is one of the commercial establishments in Bacolod City that actively encourages customers to rethink their consumption and food packaging options. It avoids, for example, the use of plastic packaging for takeout orders and provides reusable metal straws instead of the disposable kind. The Philippine Reef and Rainforest Conservation Foundation Inc. convinced the restaurant’s owner to join the initiative launched last year. —PHOTOS BY Mariejo Ramos

Traifalgar said she met travelers who shared their experiences about extreme weather events, a phenomenon she herself also witnessed in Alaska where the ship would dock after finishing a tour.

“Here in Alaska, I saw that the climate [was] really changing. [It] can be seen in floods everywhere, unpredictable weather and the melting glaciers,” she said in an online video call.

Aware of the scientific data behind global warming, she realized the gravity of the environmental crisis and vowed to help spark change.

She eventually found a good place to start: The Third Wave Restaurant in Barangay 7 which, despite the pandemic, she managed to open in 2020.

With that enterprise, Traifalgar took up the “wala usik” (nothing wasted) challenge initiated last year by the Philippine Reef and Rainforest Conservation Foundation Inc. (PRRCFI) and aimed for “zero waste” in her system of garbage disposal.

‘Not just a business choice’

“Wala usik,” or “nothing wasted” in the local language of Hiligaynon, has been adopted by PRRCFI as a catchphrase for its grassroots-based campaign to reduce single-use plastic waste in Negros, where the foundation is based. PRRCFI focuses its activities on biodiversity conservation and sustainable development in the whole of the island.

Following that group’s initiatives, Traifalgar’s resto avoided plasticware and packaging for takeout orders. “During the pandemic, people … resorted to online deliveries for food and essentials. Imagine the amount of plastics and other disposable packaging that [pile] up in the garbage [each day] because of that,” she said.

Other Bacolod entrepreneurs who have become familiar to residents for espousing “wala usik” are Lilian Gordoncillo, who runs a coffee shop in Barangay Banago frequented by workers from the nearby harbor, and Rica Bayhon and her business partner Jairus Cambelisa, who have converted an old house in Barangay 1 into the Timplada al fresco restaurant.

Established also in 2020, Timplada started as an online food delivery service before its upgrade as a restaurant. Even during the pandemic year, it already used native baskets and compostable leaves as packaging.

“Our customers often say that our dishes are ‘namit’ (delicious). But we also wanted to provide an alternative to disposable plastic containers while supporting local suppliers of native packaging,” said Bayhon, who, like Cambelisa, had worked in Thailand and is familiar with the food scene there.

When Timplada the restaurant opened last year, the owners opted for clay plates and bowls and woven “banig” placemats for dine-in customers, while retaining the recyclable packaging for deliveries.

Bayhon and Cambelisa are proud to note that their place has consistently practiced the “zero waste” objective of the ”wala usik” system.

Another establishment, the Kapipat Café in Barangay Mansilingan, offers discounts to customers who bring their own mugs.

The quaint-looking coffee shop also sells fresh beans packed in refillable glass bottles (instead of plastic pouches). The beans come from the Minoyan Murcia Marginalized Coffee Growers Agricultural Cooperative, a group of coffee farmers living in the mountains of Negros.

“I started advocating against single-use plastics [because of] Sweep, then [I joined] coastal cleanups and waste audits to gather data. My cousins and I love to snorkel so I really saw the effects of single-use plastics [on] our [seas]—that no matter how vast the waters are, there’s a chance that you will see plastics,” he said.

Javellana’s experience with Sweep, particularly its Wala Usik Economy component, inspired him to open his own “nothing wasted” establishment. He said he sought to make his business sustainable and also helpful to the farmers.

“I thought, if I’m going to have a business, it should have a socioeconomic impact and will give back to the community,” he explained.

Laws already there, but . . .Bayhon of Timplada said this sense of community was tested by such setbacks as Typhoon “Odette” (international name: Rai), which struck the Western Visayas region in December last year. She remembered “wala usik” businesses at that time raising funds for victims of the supertyphoon.

Bigger companies, seeing those initiatives by small and medium businessmen, have started their own “wala usik” projects. Nestlé, for one, has been providing sari-sari stores in Barangay Banago with its trademark “Aldo” refillable dispensers.

Yet amid these efforts to improve the city environment, poor waste management remains a perennial concern in Bacolod—among other gaps in public service that remain despite the passage of pertinent laws.

Under the Ecological Solid Waste Management Act of 2000, for example, local governments are required to prepare a 10-year solid waste management plan.

The city government of Bacolod drew up such a plan in 2015 under which it is responsible for collecting nonrecyclable waste, while the barangays are tasked with recyclables such as bottles and tin cans. It also enacted two ordinances on plastic waste management which are crucial to a city that generates close to 500 tons of solid waste daily.

And yet, Bacolod does not have a functioning landfill—a situation that contradicts its well-intended legislation.

Lack of political will in the government and limited public awareness have dogged the implementation of laws, said Princess Bala-an, project manager of Sweep’s Wala Usik Economy.

Volunteers of Sweep’s coastal cleanup campaign also cite the need to engage the government, as they saw that the cleanup alone was futile amid the continued proliferation of garbage.

For Traifalgar, there is a need to persist in “sustainable solutions” because ultimately these efforts, even among private individuals, would lead to a change of perspective in the community.

“Sometimes, they think that making changes for the environment is a burden for them because they’re used to convenient and fast products rather than sustainable solutions. But it’s a choice for the future,” she said. INQReporting for this story was supported by Internews’ Earth Journalism Network.