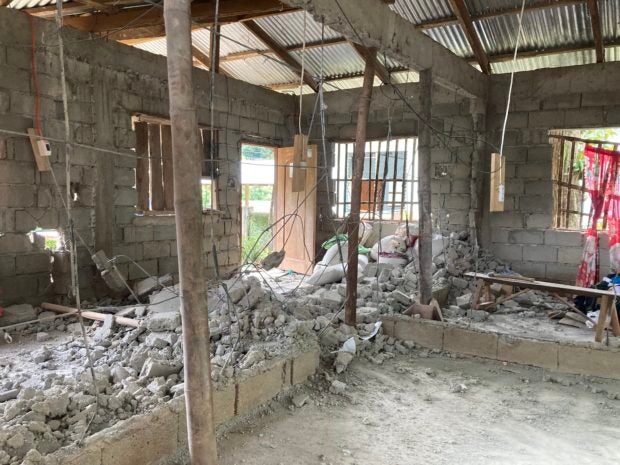 A wall of a house was smashed by the powerful tremor that hit Abra on July 27, 2022. Photo by Daniza Fernandez

MANILA, Philippines — The total number of fatalities in the strong magnitude 7.0 Abra earthquake has risen to 10, the National Disaster Risk Reduction and Management Council (NDRRMC) said on Friday.

This, after the bodies of four victims were retrieved from the landslide in Luba, Abra, adding to the previously reported six mortalities.

The fatalities were identified as Marcos Barreyro, 38; Louis Balais Dining, 21; Jack Balais Gamengan, 17; and Angelo Badi, 15, according to reports.

The body was found at the landslide area in Kayaddakad Road, Sitio Bangel, Barangay Poblacion in Luba town.

“We received a report that the 4 missing in Abra had been retrieved already,” NDRRMC spokesperson Mark Timbal told reporters. “These 4 will be added to our fatalities.”

The province of Abra has since declared a state of calamity on Thursday.

According to the Philippine Institute of Volcanology and Seismology, a tremor hit northeast northeast of Lagangilang, Abra, at 8:43 a.m on Wednesday, which prompted more than 1,100 aftershocks.

More aftershocks are expected in the coming days and weeks, according to the state seismologist.