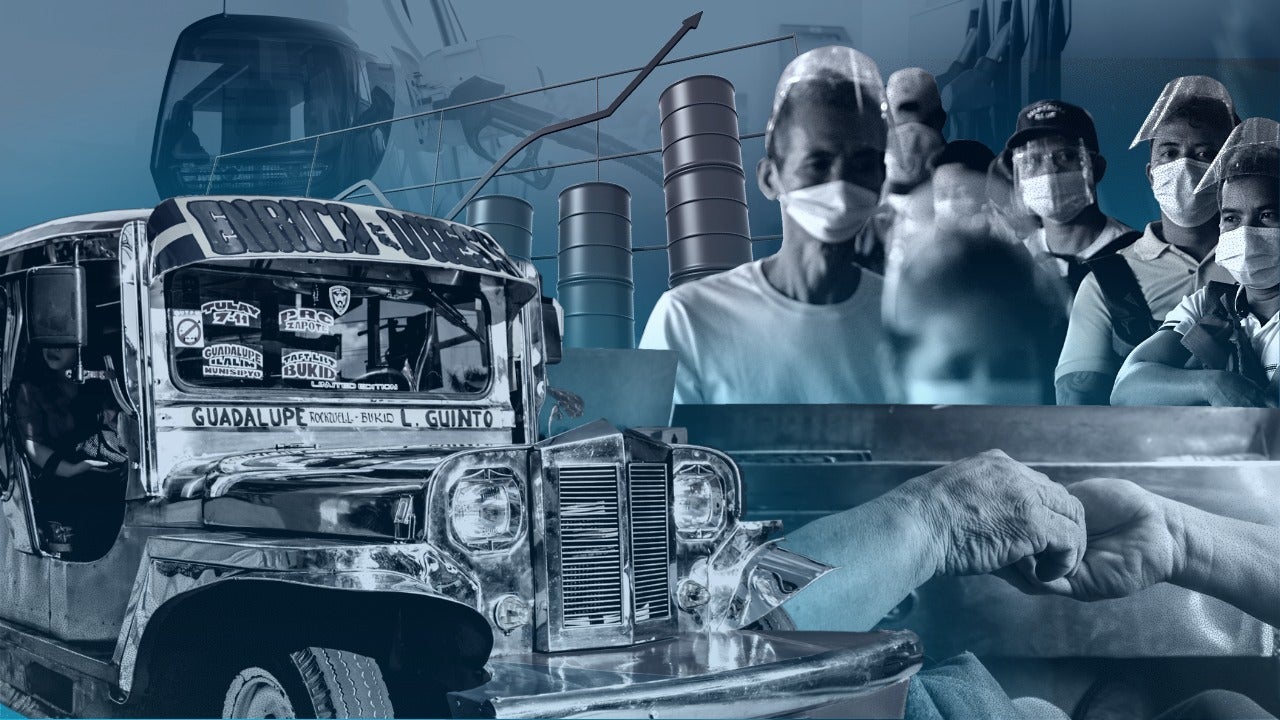 The Passenger Forum (TPF) said this on Friday (July 29) as it stressed that letting more TNVS units on the road will make the service more affordable because “the pricing for this service is dynamic.”

Primo Morillo, convenor of TPF, asked the Land Transportation Franchising and Regulatory Board (LTFRB) to increase the cap for TNVS units, saying that it will prevent price surges caused by high demand and low supply.

He said increasing the cap will “help our transport situation in more ways than one” because it will make TNVS rates cheaper—the reason that he asked the LTFRB and Transport Network Companies to work together and address the said demand.

This, as the Research and Tech Lab, a digital research and consulting company, said in 2018 that out of the 781 shared sentiments that it tracked online, 46.47 percent choose TNVS as “primary mode of transportation.”

Murillo said less price surges and lower rates could convince car owners to book TNVS instead of driving their own cars, while commuters who can take TNVS rates when rates are affordable could effectively lead to a lesser demand for mass transportation.

This, as based on data from the University of the Philippines’ School of Urban and Regional Planning, there are 8,959,000 jeepney passengers and 1,865,000 bus passengers everyday. 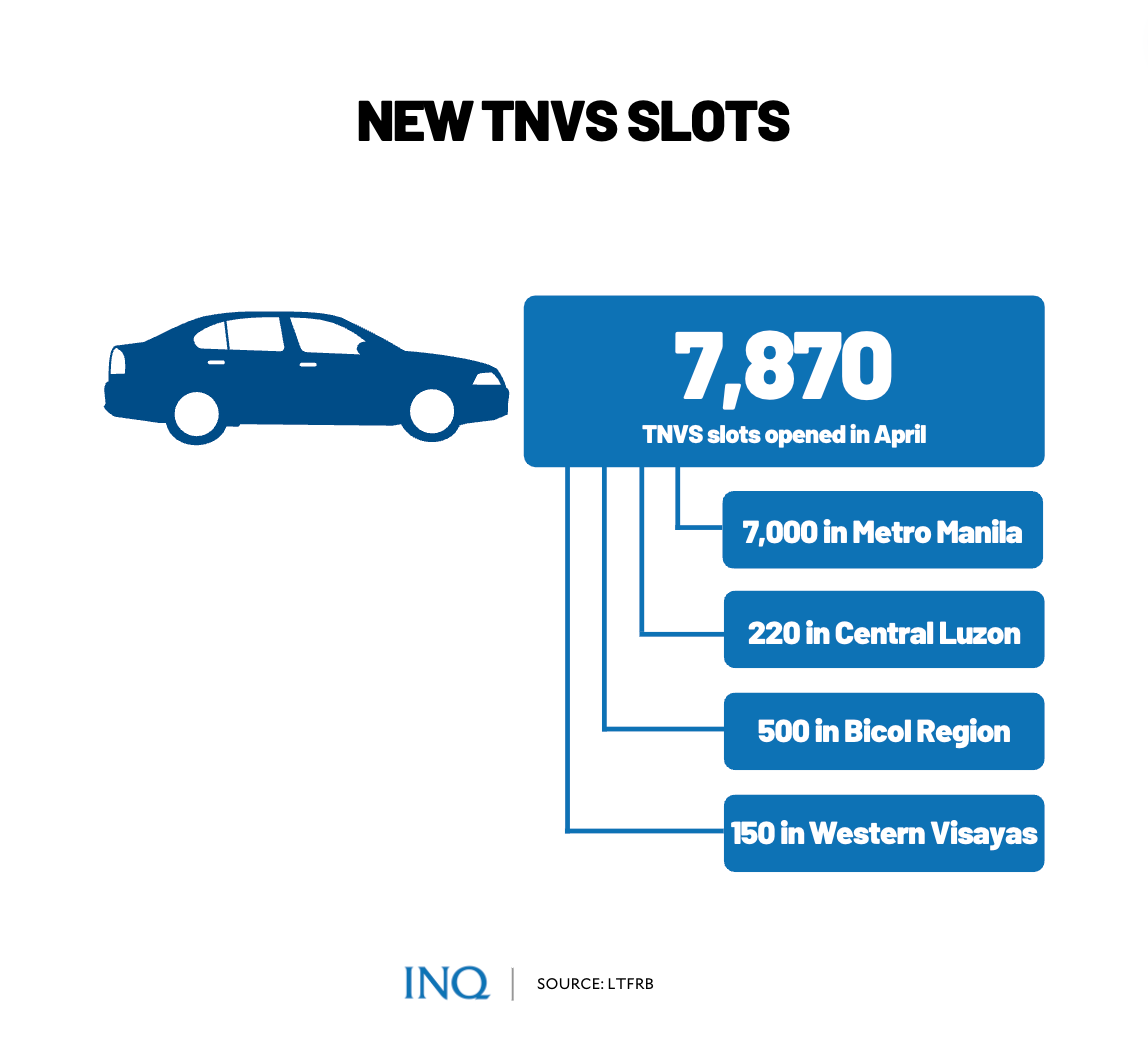 The LTFRB recently opened 7,870 slots for TNVS units—7,000 for Metro Manila, 220 for Central Luzon, 500 for Bicol Region, and 150 for Western Visayas—to address the increasing demand for mass public transportation.

However, ride-hailing company Grab Philippines said in June that only five percent had been onboarded by the government.

Back in June 2019, TPF found that 78 percent of TNVS passengers suffered more expensive rates because of a surge in pricing, while 72 percent experienced difficulty in booking a unit.

“The situation is the same now given the high demand for all kinds of available transport options. We hope the LTFRB and Transport Network Companies will work together to address the demand for TNVS,” Morillo said. 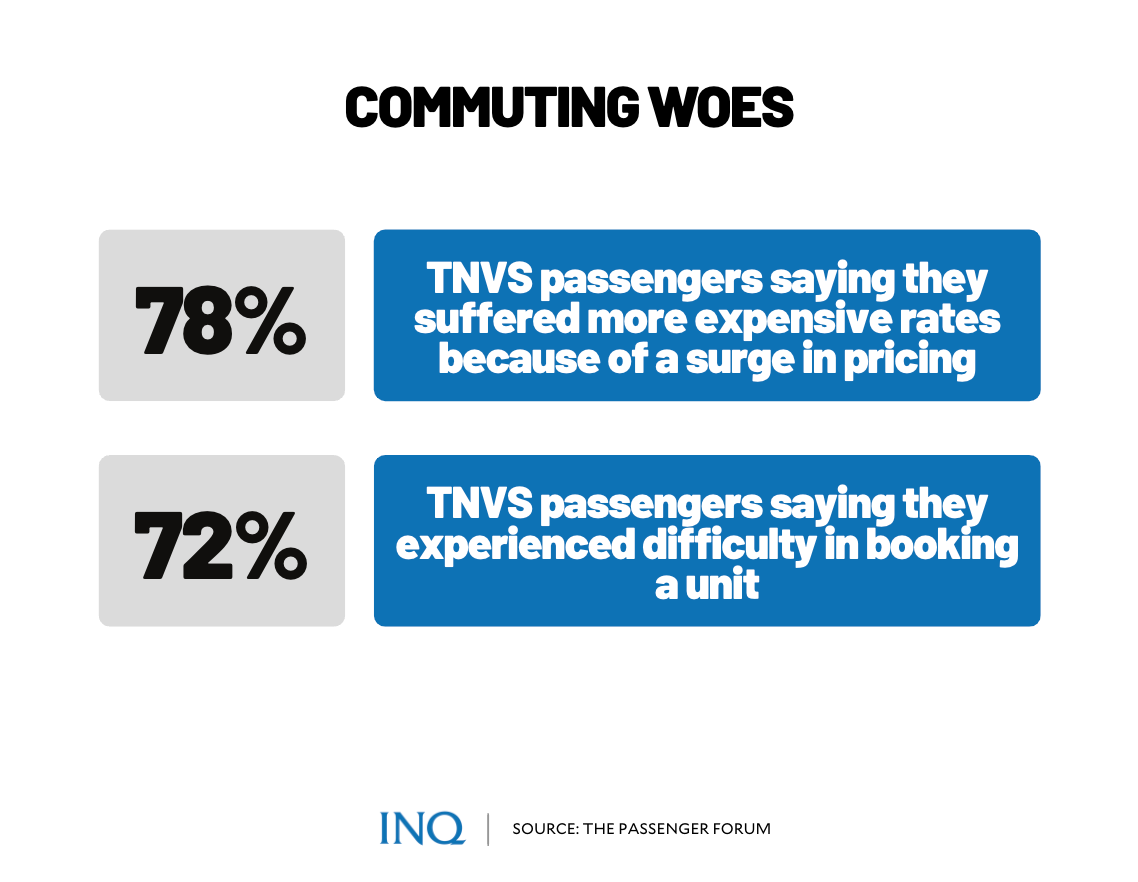 A separate study, which TPF came out with this month, showed that 79 percent of commuters said waiting time is “too long,” while 96 percent disagreed that there are enough PUVs to service commuters.

Morillo explained that of the remaining 21 percent, five own a bicycle or e-scooter and another four are neutral or can’t decide whether their waiting is too long or not: “We can infer that there is just about 12 percent of commuters who are satisfied with their current waiting time.”

It was in 2016 when a Ford Motor Company study showed that 43 percent of Filipinos said their commute is inconvenient; only four percent liked their commute, while 23 percent said it’s “not bad.”

Transportation Undersecretary Mark Pastor had claimed that in his recommendations to Jaime Bautista, the new secretary of the Department of Transportation (DOTr), available public transportation should be sufficient if operators will deploy 90 percent of their units.

Last Wednesday (July 27), TPF also asked the DOTr and the LTFRB to immediately release their route rationalization plan (RRP), saying that there are a lot of things dependent on it.

“We understand that they need to carefully study how to make our public transportation more efficient and effective in moving passengers but we want to know what is taking them so long,” it said.

Bautista earlier said that a study on “fleet rationalization,” a plan to optimize the number of vehicles in several routes to address the rising demand for public transportation, is still in the process.

Morillo said “we want the plan to be released not because we will accept it as it is but because we have to check how responsive it is to the situation of commuters and the transport crisis happening now.”

“We want to know how they plan to cover unserved and underserved areas, how interconnected the routes and transport modes will be, and how this will help start the shift from a car-centric policy environment to a commuter-centered transport system. We hope the DOTr will be consultative in its process.”