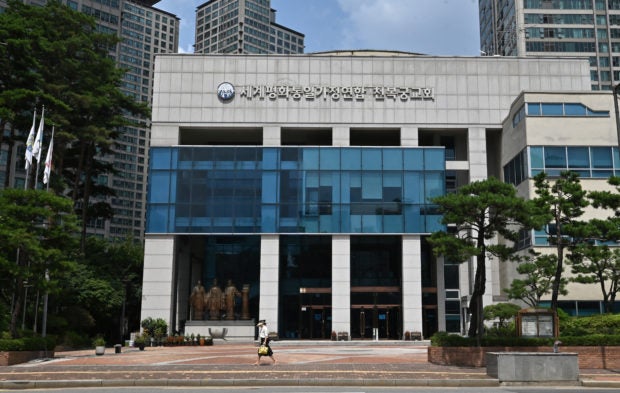 This picture taken on July 26, 2022, shows a woman walking past a branch facility of the Unification Church, known officially as the Family Federation for World Peace and Unification, in Seoul. – The assassination of former Japanese prime minister Shinzo Abe by a man resentful of the Unification Church has resurfaced years of controversy over the group. (Photo by Jung Yeon-je / AFP)

TOKYO — The assassination of former Japanese prime minister Shinzo Abe by a man resentful of the Unification Church has resurfaced years of controversy over the group.

Police say Tetsuya Yamagami targeted Abe because he believed the former prime minister supported a “certain group” to which the man’s mother had made large donations.

In a letter published by local media, Yamagami accused Abe of supporting the Unification Church and expressed resentment towards the group, which has confirmed his mother’s membership.

Yamagami’s mother reportedly joined the church after her husband died by suicide, and was quickly consumed by her faith.

Yamagami’s uncle told local media his nephew sometimes called him for help when his mother left her children alone and without food while attending church.

She donated 100 million yen (then around $1 million) to the church, he said, and later declared bankruptcy.

That all sounds familiar to attorney Hiroshi Yamaguchi, who represents former church members.

“Members are under pressure every day to make donations,” he told AFP.

“They tell you karma is attached to money and (donations) are the only way to save yourself. So you think you have to do it.”

Known officially as the Family Federation for World Peace and Unification (FFWPU), the church was founded by Sun Myung Moon in Korea in 1954 and its followers are colloquially known as “Moonies.”

The Japan chapter began in 1959, and membership took off during the country’s 1980s economic boom – “an era in which people were unsure how to live their lives,” said Kimiaki Nishida, professor of social psychology at Tokyo’s Rissho University.

Japan became a financial hub for the church, which taught Japanese believers they needed to atone for their country’s wartime occupation of Korea.

“They allocate different roles to each country intentionally,” said Hotaka Tsukada, an associate professor of the sociology of religion at Joetsu University of Education.

“They have (sales) manuals to exploit believers,” he told AFP.

The church offered “spiritual sales” of exorbitantly priced goods including a 43-million-yen ($350,000) statuette, which Japanese believers were told would absolve them or their ancestors.

Huge outlays by members led to a backlash.

Japan’s National Network of Lawyers Against Spiritual Sales says it has filed suits seeking 123.7 billion yen ($900 million) in damages for former followers since 1987.

A series of arrests in the 2000s and verdicts against the church prompted limits on “spiritual sales” but lawyer Yamaguchi says believers are still pressed to meet monthly donation targets.

“It’s a goal God decides,” he says the church tells members. “It’s a quota they need to meet.”

The church denies members are pressured.

“Our view is that all donations before Heaven must be freely given,” FFWPU press contact Demian Dunkley told AFP.

“FFWPU sometimes makes appeals for donations, but FFWPU members choose whether, when, and how much they will give.”

In 2005, Yamagami reportedly attempted suicide after his mother’s bankruptcy, hoping his siblings would receive an insurance payout.

His older brother, a childhood cancer survivor, died by suicide a decade later.

In a letter to an anti-church blogger sent the day before Abe’s murder, Yamagami said his teen years were marred by his mother’s “overspending, family disruption, and bankruptcy.”

“The experience has distorted my entire life,” the letter published by local media said.

‘One family under God’

Former church members have recounted similar family ruptures, including a Japanese woman whose mother told her to stay with an abusive husband chosen by the church because a divorce would “please Satan.”

“I can’t defend what (Yamagami) did,” she told a press conference this month, speaking on the condition of anonymity.

“But… that’s how badly the church destroys lives.”

Yamagami’s letter accused Abe of being “one of the most influential supporters of the Unification Church,” based partly on a 2021 speech the politician gave to a church-linked group.

The church and affiliated groups have regularly enlisted prominent figures, including former US president Donald Trump, for events.

Dunkley said the church “seeks to build relationships with anyone interested in peace.”

He said its “mission is to help bring about a peaceful, harmonious world of true love in which humanity lives as ‘one family under God’.”

But the former church member said followers were shown pictures of Moon with prominent figures to encourage reverence.

“It made me feel they have connections with politicians and Moon was a true Messiah,” she said.

The assassination has forced a re-examination of the church’s ties with politicians in Japan, including Abe’s grandfather: former prime minister Nobusuke Kishi.

Abe’s brother, Defense Minister Nobuo Kishi, acknowledged this week that church members had served as campaign volunteers, something Dunkley said followers only do “as private citizens”.