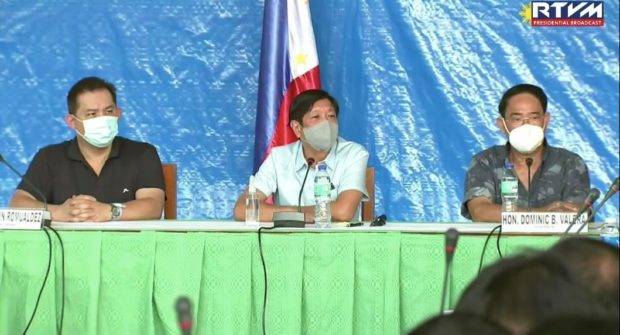 President Ferdinand Marcos Jr. (center) holds a situation briefing at Bangued, Abra on Thursday after the Magnitude 7.0 earthquake that rocked the province and nearby areas on Wednesday. House Speaker Ferdinand Martin Romualdez (left) and Abra Governor Dominic Valera are seated beside Marcos. (Screenshot from RTVM Livestream)

During a situation briefing after visiting Abra — which was hit by the magnitude 7.0 earthquake on Wednesday — Marcos agreed with proposals made by his elder sister, Senator Imee Marcos. He said that the country does not need a new and costlier department.

Senator Marcos said she had filed a bill to create a new body that would empower NDRRMC, modeled after the United States Federal Emergency Management Agency (FEMA).

“We are siblings indeed, I fully agree; I did not ever, I did not ever understand the concept of a full […] department. I don’t think it needs that because you don’t really have to form policy,” President Marcos said.

“It is just an implementation of a rescue mission or a search and rescue mission, there are many models, but the good model that I’ve seen is FEMA. And that’s only an adjunct of… Ministry of Interior yata ‘yon eh (I think),” he added.

According to Senator Marcos, reports of the military needing to break the chain of command and officials being required to be at ground zero of calamities — just like what happened after the Abra earthquake — proves that the NDRRMC must be empowered.

She believes the new agency can be placed under the Office of the President for quick deployment and management.

“Mr. President, I think the report of General Torres as well (of) as our Chief of Staff merely highlights the inefficiency our system that they have to break the chain of command, they have to call on other departments, Secretary (Erwin) Tulfo has to come here, the President himself has to come here merely underlies the urgency of empowering the NDRRMC,” Senator Marcos said during the same briefing.

“May I recommend by way of another ‘Imee Solusyon’, rather than (a) full-scale department na mauubos lang ang budget sa sahod ng limang Usec, isang katutak na Asec, can we start by an NDRRMC authority or administration, tulad ni Apo Lakay, ‘yong DBM (Department of Budget and Management) nag-umpisa bilang commission,” she added, referring to the term of their father, late former president Ferdinand Marcos Sr.

Leyte 1st District Representative and House Speaker Ferdinand Martin Romualdez who was also present during the briefing meanwhile assured the Marcoses that the Congress’ other chamber would support the proposals.

“Mr. President, on the part of the House, we shall support the good senator’s proposal here, owing to the fact that we’ve always been looking for best practices and FEMA or even the AFAD (Disaster And Emergency Management) in Turkey are great models for best practices for these protocols,” Romualdez, cousin of the Marcoses, said.

“We shall also join the good Senator from Ilocos Norte on her call to support the budgetary requirements for the restoration of the heritage cultural sites as well of course as the various infrastructures on the situation report,” he added.

The senator meanwhile said in jest that the Waray thinking is different from how Ilocanos think — referring to the belief that people from Ilocos are very frugal.

The Marcoses hail from Ilocos Norte, while the Romualdezes — their cousins on the maternal side, hail from Leyte.

Several lawmakers have called the Senate and the House of Representatives about creating a Department of Disaster Resilience (DDR) to address calamities affecting the country, mainly due to its position in the Pacific Ring of Fire and as a frequent landing area for strong typhoons.

The House last September 2020 — during the 18th Congress — approved on the third and final reading House Bill No. 5989 or the Disaster Resilience Act. However, the said bill was not passed by both chambers of Congress due to time constraints.

In the Senate, Senators Bong Go and Grace Poe have also renewed calls for establishing the DDR.

Extensive damage has been reported in different areas in the highlands of the Cordillera and nearby regions after the strong movement on Wednesday morning. As of now, the NDRRMC said five had been reported dead due to the tremors.