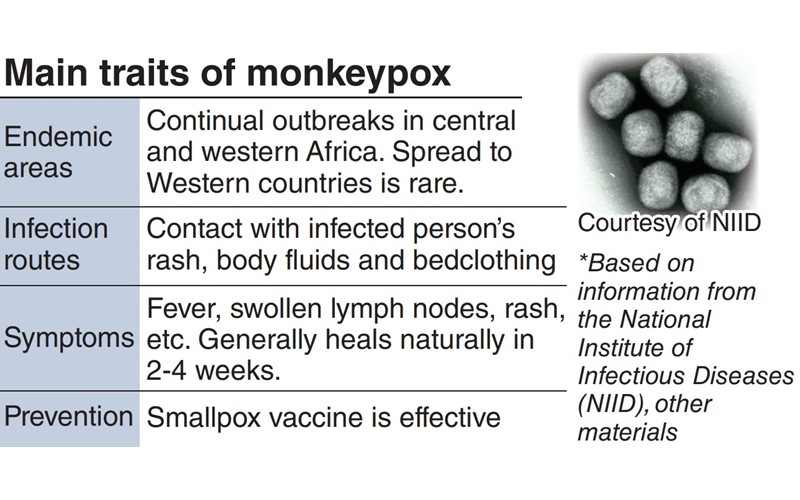 An artist illustration : Main traits of monkeypox. Courtesy of NIID / The Yomiuri Shimbun

TOKYO — The first case in Japan of monkeypox, which has been spreading alarmingly around the globe, has been confirmed in Tokyo, the Health, Labor and Welfare Ministry announced on Monday.

The infected person is a male Tokyo resident in his 30s who experienced symptoms of fever, headache, a rash and fatigue. He is currently hospitalized in Tokyo and in stable condition, according to the ministry.

The ministry said that the man visited Europe in late June and returned to Japan in mid-July. He started feeling sluggish on July 15 and went to a healthcare facility in Tokyo on Monday.

Monkeypox — an infectious disease similar to smallpox — was detected in a test conducted by the Tokyo Metropolitan Institute of Public Health. It became known that during his stay in Europe, the man had come into contact with a person who would be later diagnosed with monkeypox.

A public health center is working with the man to trace his movements since returning to Japan to determine whether anyone came into close contact with him.

According to the World Health Organization (WHO) and other sources, human-to-human transmission of monkeypox is possible through contact with a skin rash or the body fluids of an infected person. The incubation period is about seven to 14 days, and symptoms such as fever, headache and swollen lymph nodes last for one to five days, after which a rash develops. Full recovery takes between two and four weeks after onset.

Most patients recover naturally, but children are said to be at risk of developing severe symptoms. Smallpox vaccines stockpiled in Japan have been found to be effective in preventing monkeypox from developing or becoming worse. The normal course of action is to treat the symptoms, although there are curative drugs that have been approved in Europe.

In Africa, where the medical infrastructure can be insufficient, fatality rates are reported to be 3%-6%. But no deaths linked to monkeypox have been reported outside of Africa.

The spread of monkeypox had been largely limited to parts of Africa, but from this year, more than 16,000 cases have been reported in 75 countries and regions, including the United Kingdom and Spain. On Saturday, the WHO declared “the escalating global monkeypox outbreak a Public Health Emergency of International Concern.”