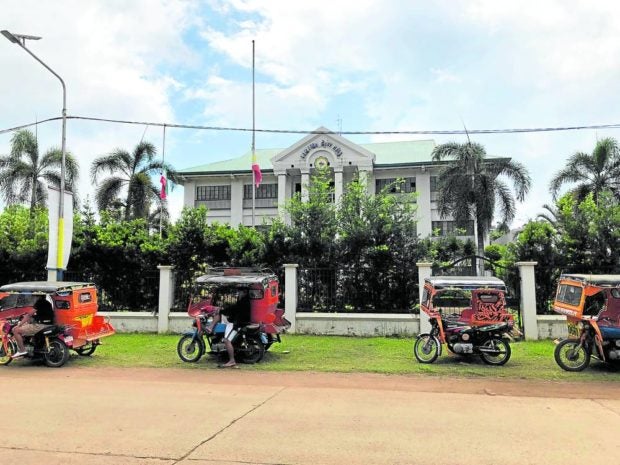 The Philippine flag at the City Hall of Lamitan in Basilan province is flown at half-staff on Monday to mourn the death of former Mayor Rose Furigay, who was shot and killed by a longtime critic on Sunday. (JULIE S. ALIPALA)

Mayor Furigay said the claim of his wife’s killer, Chao Tiao Yumol at the Ateneo de Manila University, was baseless.

Yumol shot and killed the former mayor, her aide and a security guard at the Ateneo de Manila University campus Sunday afternoon.

Yumol claimed that he killed Rosita because he believed she was involved in the drug trade in Basilan province.

“’Yung accusation niya, it was baseless (His accusations were baseless),” Roderick said in an interview on ABS-CBN’s Teleradyo.

“Hindi namin akalain na hahantong ito ng ganito (We did not think it would get to this point),” he added.

Atty. Quirino Esguerra, the family lawyer and the spokesperson of the Furigays, also earlier said that Yumol had no evidence to support the allegations against the former mayor.

Esguerra said that prior to the shooting incident, Yumol was facing over 70 cases of cyberlibel filed by the family of Furigay, as well as by other officials of the city government after posting malicious posts against them in his Facebook page.

He added that Yumol had been “in hiding” since January 2021 as he faces seven warrants of arrest for cyberlibel and one for indirect contempt after posting disparaging posts against the judge of the Regional Trial Court Branch 12 in Zamboanga City.