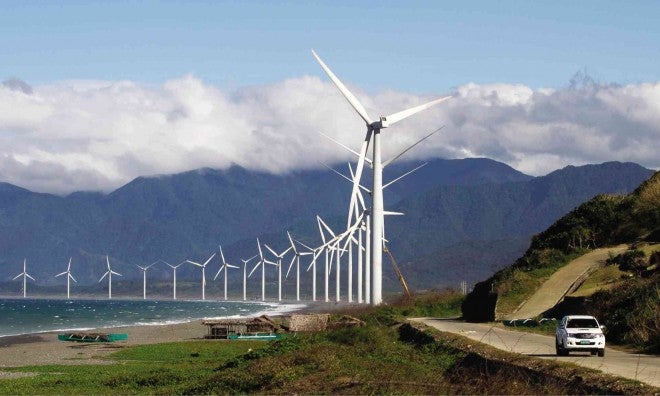 FILE PHOTO: The wind farm in Bangui town is a picture-perfect backdrop for tourists. ALEXIS CORPUZ

MANILA, Philippines —Environmental groups have reminded President Ferdinand Marcos Jr. of his campaign promise to switch the Philippines to renewable energy sources, a move he then said would lower electricity costs and boost the economy.

The People for Power (P4P) Coalition’s remark sought to get Marcos to speak about his green policy at his first State of the Nation Address (Sona) on Monday, July 25, at the Batasang Complex in Quezon City.

Marcos spoke in early April about his desire to see the country become a major offshore wind power producer in the world in “a post-pandemic global economy” by pursuing regulatory and policy reforms “as we pursue aggressive growth target.”

The power coalition now urged him to present a comprehensive plan to fulfill his pledge on the country’s use of windmills and other sustainable power sources during his national address.

“President Marcos has claimed the Bangui windmills as his own and announced his support for renewable energy during the campaign. Now we want more than vague promises,” P4P convener Gerry Arances said in a statement on Wednesday.

“His Sona should clarify his goals and plans to achieve those goals,” he added.

P4P lamented that Marcos Jr. has not yet offered a clear picture of his administration’s energy policy despite declaring that he intends to abandon the use of fossil fuels. The coalition expressed hope that Marcos Jr.’s frequent mention of the Bangui Windmills in Ilocos Norte during the presidential campaign is not just a political gimmick.

Arances then noted that past administrations – particularly that of former President Rodrigo Duterte – have vowed to push for renewable energy but they did not fulfill that promise.

“He (Marcos Jr.) should also issue marching orders to the incoming DOE (Department of Energy) chief to immediately create the energy transition roadmap as we have the bitter experience of the previous administration’s DOE which touted renewable energy yet continued building coal and gas power plants and presented less than ambitious climate plans,” he said.

“The fossil energy crisis which now burdens consumers with skyrocketing electricity bills attests to how unwise this was,” he added.

As a pro-clean energy advocate during the 2022 presidential campaign, Marcos Jr. touted the country’s potential to produce wind power through windmills. The Bangui Windmills were also featured in his various television campaign ads, including one in which he was seen passing a miniature windmill to others.

“We have the potential to be a major wind power producer in the world. Our unique topography is very suitable for building offshore wind farms and we should take advantage of it to produce cheap electricity,” Marcos Jr. said in a statement on April 6.

READ: Marcos: PH has potential to be major wind power producer in the world

“At the rate fuel prices are going and with impacts already spilling over to other commodities, continued reliance on fossil fuels for power will clearly starve Filipinos,” he said.

The P4P convener stressed that Marcos Jr. has the opportunity to fulfill energy security and affordability in order to reduce the country’s dependence on foreign energy sources and eventually make electricity cheaper.

“By casting its lot with renewable energy and seeing its implementation to the very end of his term, this administration can reduce our dependence on foreign energy sources, bring down our greenhouse gas emissions to help with the climate emergency, and slash electricity bills for the long-suffering Filipino consumer,” Arances said.

“He needs to see reason and declare a plan for a 100% renewable energy-powered future for Filipinos,” he added. — With reports from Christine Annie Asistio, INQUIRER.net trainee