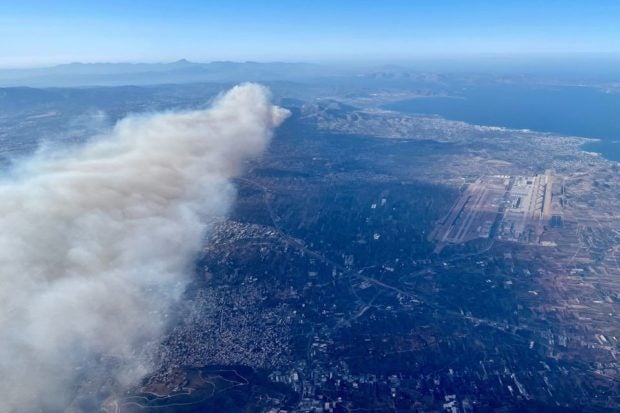 Smoke rises as a wildfire burns on Mount Penteli, next to the Eleftherios Venizelos International Airport, in Athens, Greece, July 19, 2022. REUTERS

ATHENS — A Greek wildfire fueled by gale-force winds raged in the mountainous region of Penteli near Athens on Tuesday, prompting authorities to order the evacuation of at least four areas and a hospital.

Heavy clouds of smoke were rising into the sky billowing over Mount Penteli where the fire broke out at 1430 GMT, some 27 km (16 miles) north of central Athens.

Images showed the Parthenon temple on the Acropolis hill covered in red light due to the fire burning in the background. By nightfall, the flames were visible from the island of Evia, about 50 km away, according to witnesses.

About 420 firefighters assisted by 85 engines were trying to tame the blaze, which was burning on several fronts by late afternoon. More than 24 helicopters and planes earlier dumped water on the flames but had to halt operations at night for safety reasons.

Authorities ordered the evacuation of four areas, Drafi, Anthousa, Dioni and Dasamari. They also advised residents in more areas to prepare to evacuate. 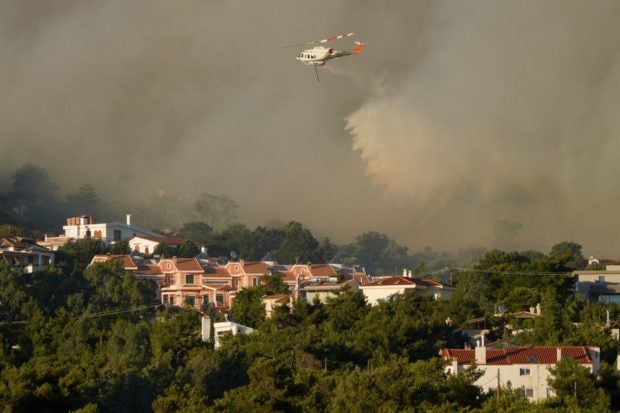 One hospital and the National Observatory of Athens were evacuated as a precaution. Traffic was halted on roads leading to Penteli and police were helping residents find their way out of the fire-stricken areas.

“Today is a difficult day. We are at the peak of the fire season and the current conditions make it easier for fires to break out and spread,” said Fire Department spokesperson Yiannis Artopios in a statement.

Artopios earlier told state TV ERT that the fire was a “difficult” case and that 28 firefighters from Romania were assisting local firefighters.

“We are fighting it, we are trying to circle the fire,” said Artopios.

Winds were forecast to persist until Wednesday afternoon.

More than 200 firefighters and equipment from Bulgaria, France, Germany, Romania, Norway and Finland will be on standby during the hottest months of July and August in Greece.

Last year, wildfires ravaged about 300,000 acres (121,000 hectares) of forest and bushland in different parts of Greece as the country experienced its worst heat wave in 30 years.

Two dead after helicopter crashes off Greek island of Samos