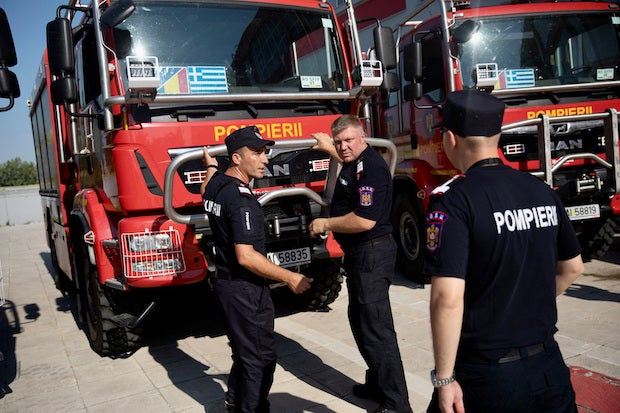 Romanian firefighters, who will reinforce their Greek colleagues during the summer season to tackle wildfires in the country, stand next to their vehicles, in Athens, Greece, July 2, 2022. (REUTERS/Stelios Misinas)

ATHENS — Several dozen Romanian and Bulgarian firefighters took up their posts in Greece on Saturday, the first members of a European force being deployed to the country to provide backup in case of major wildfires during the summer.

More than 200 firefighters and equipment from Bulgaria, France, Germany, Romania, Norway and Finland will be on standby during the hottest months of July and August in Greece, where a spate of wildfires caused devastation last summer.

A group of 28 Romanian firefighters with eight vehicles, and 16 firefighters from Bulgaria with four vehicles, were the first to arrive for the two-month mission, financed and coordinated under the European Union’s civil protection mechanism.

“We thank you very much for coming to help us during a difficult summer for our country, and for proving that European solidarity is not just theoretical, it’s real,” Greek Civil Protection Minister Christos Stylianides said on Saturday as he welcomed the members of the Romanian mission in Athens.

“When things get tough, you will be side by side with our Greek firefighters so we can save lives and property.”

The Bulgarian firefighters have been stationed in Larissa, in central Greece.

Last summer’s wildfires ravaged about 300,000 acres (121,000 hectares) of forest and bushland in different parts of Greece as the country experienced its worst heatwave in 30 years.

Following sharp criticism of its response to the fires, the Greek government set up a new civil protection ministry and promised to boost firefighting capacities.

In Greece’s worst wildfire disaster, 102 people were killed when a blaze tore through the seaside town of Mati and nearby areas close to Athens during the summer of 2018.

Read Next
PRO 11 physician tagged in killing of student in Davao City
EDITORS' PICK
vivo brings to the Philippines a powerful smartphone with a slimmer body, the vivo Y02s for only PHP 6,499
Palace: Biggest supermarkets in PH commit to sell sugar at P70 per kilo
What to watch out for when selecting a video surveillance solution
Heads may roll at BOC, says Palace if sugar smugglers are allowed to use recycled import permits
House energy committee chair Arroyo bats for cheap electricity
DOH reports increase in daily COVID-19 deaths, mostly unvaxxed
MOST READ
Brian Poe-Llamanzares receives his PhD in Public Administration
Mayor bares issues vs closed QC school
Metro Manila’s No. 1 wanted man arrested, says NCRPO
Alyssa Valdez to miss Creamline’s AVC Cup campaign
Don't miss out on the latest news and information.