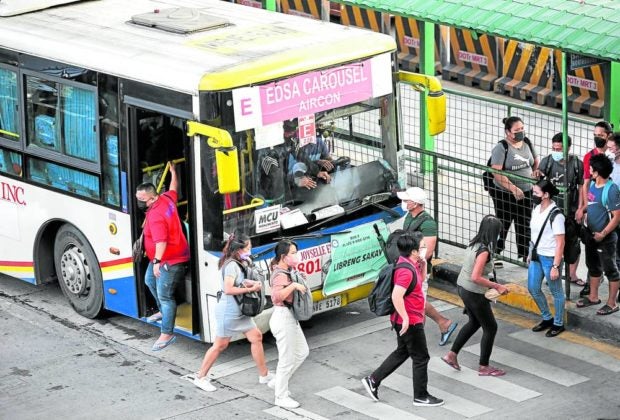 Commuters getting off a bus at the Edsa Carousel. (Photo by LYN RILLON / Philippine Daily Inquirer)

MANILA, Philippines — The Land Transportation Franchising and Regulatory Board (LTFRB) has paid P310 million to bus operators handling the government’s “Libreng Sakay” or free rides program on Edsa in the hopes that they would deploy all their buses, especially during rush hours to better serve commuters.

Bus consortiums, ES Transport and Mega Manila Consortium Corp., did not deploy all their buses for the Libreng Sakay program during rush hours on Monday because of delayed payments to their operators and drivers.

According to the LTFRB, the consortiums deployed only 200 of their 440 buses during Monday’s rush hours, forcing hundreds of commuters to form long lines at the Edsa Busway Carousel stations along the major thoroughfare and wait longer for their rides.

“One of the reasons why they can’t fully deploy their buses is because they cannot pay their drivers on time, and some of them would actually rather go back to their provinces,” LTFRB Chair Cheloy Garafil told reporters in a virtual press briefing on Tuesday.

There was no immediate comment from the consortiums or their operators.

The payment covered dues for the sixth to 10th week of operation of the Edsa Busway Carousel, which has had an average of 300,000 passengers daily since April.

The LTFRB chief said the total arrears up to this week’s operation were still being validated.

“We just hope they won’t press us so much because we are doing our best to settle the payments,” said Garafil, who assumed the LTFRB post two weeks ago and on the 13th week of operation of the Edsa Busway Carousel.

The P310-million payout would be “sufficient” to cover the deficiencies “in the meantime, so at least they can implement a full deployment of their buses on the busway, especially during rush hours,” she said.

“We are confident and we are relying on the word of the consortia operating on the busway that they will keep their word to maximize their deployment,” Garafil added.

The Duterte administration began the third phase of the free rides program on April 11 to help tide the commuters amid high inflation and soaring oil prices.

In June, the LTFRB announced that the free bus rides on Edsa would end on July 31, saying that 80 percent of the P7-billion budget for the entire free rides program, including services by public utility jeepneys and mass transport system, had been used up.

President Marcos approved earlier this month the extension of the free rides on the Edsa Busway Carousel until year-end. Transportation Secretary Jaime Bautista said an additional P1.4 billion is needed for this.

Meanwhile, a survey by a commuter network and mobility advocacy group showed that the majority of Filipinos in Metro Manila were struggling to get a ride due to the lack of public utility vehicles (PUVs) on the road, citing the need for more transportation infrastructures.

The Passenger Forum (TPF), in a statement on Tuesday, said that 79 percent of Filipino commuters found their “waiting time for a ride too long” while 96 percent said there was a lack of PUVs.

“This number confirms what we regularly see on the roads and sidewalks, especially during rush hours,” TPF convener Primo Morillo said, referring to long queues at the bus and train stations.

Based on TPF’s survey, he said that only 9 percent of the commuters were “satisfied with their current waiting time.”

Morillo said this underscored the need for the government to address the lack of PUVs compared to the demand from passengers.

Bautista had earlier said that the transport department was eyeing to implement a fleet rationalization scheme in view of the start of classes on Aug. 22 and the resumption of full in-person classes on Nov. 2. This will allow the government to seek alternative or additional routes vis-a-vis the number of public vehicles on the road.

—WITH REPORTS FROM TYRONE JASPER C. PIAD AND INQUIRER RESEARCH