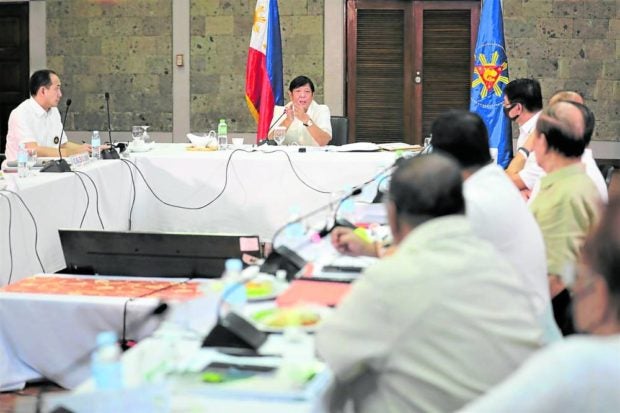 FOOD SECURITY | President Ferdinand Marcos Jr. and officials of the Department of Agriculture continue discussions on government plans to enhance food production. Their meeting on July 18, 2022, focused on the DA’s operation plan for priority commodities and touched on the need to build more farm-to-market roads. (Photo from the Facebook account of the Department of Agriculture)

MANILA, Philippines — President Ferdinand Marcos Jr. wants to personally pursue government-to-government (G2G) talks to buy cheaper fertilizers from other countries in a bid to address surging prices of the farm input and mitigate its impact on the country’s food security.

The president, who also heads the Department of Agriculture (DA), said the government was considering negotiating with China, Indonesia, the United Arab Emirates, Malaysia, and Russia for the procurement of cheaper fertilizers.

This developed after Marcos met with DA officials in Quezon City on Monday, the second time since he assumed office on June 30.

“They want to help, they want to approach us, then let’s take advantage of that. Give us fertilizers at a very good price. That’s the whole point of G2G,” the president was quoted by Malacañang as saying.

“I’m thinking would it be useful for us if I wrote a letter to all of them and I’ll say that we are in the market to buy this volume of fertilizer,” he added.

He asked DA officials to provide him data on the sources and prices of fertilizers, as well as the department’s distribution plan during the planting season.

Several farmer groups have been pressing the government since last year for a fertilizer subsidy following the sharp increase in fertilizer prices, which was exacerbated this year by the Russia-Ukraine war.

According to the United Nations Food and Agriculture Organization, Russia was the world’s top exporter of nitrogen fertilizers such as urea, the second leading supplier of potassium fertilizers, and the third largest exporter of phosphorus fertilizers in 2021.

Agriculture stakeholders have said that it was imperative for the government to immediately give fertilizer and fuel subsidies to farmers to prevent a decline in farm output, particularly that of rice.

The DA earlier estimated palay output to decline by about 1.1 million metric tons (MT) this year if the government would not be able to provide more fertilizer subsidies. This is equivalent to 600,000 MT of rice, which would be good for 10 days.

It said some farmers were forced to reduce their use of fertilizers as the cost of the farm input has nearly tripled from two years ago, resulting in lower yields.

The latest figures from the Fertilizer and Pesticide Authority showed the average price of urea, the most commonly used fertilizer, has shot up to P2,781 per 50-kilo bag for the period July 4-8 this year, significantly higher than the P1,321 a year ago and P1,050 in 2020. The cost of complete fertilizers has also doubled to P2,369 per 50-kilo bag from P1,187 in July 2021.

The DA said the government has two options to overcome the expected decline in palay production: increase output by giving fertilizer and fuel subsidies and bring in cheaper rice from abroad.

On Monday, the President said he also wanted the DA to come up with a farm-to-market road master plan that would be the government’s guide to promoting food security and empowering rural communities.

“Farm-to-market road is the first step to solve some of the supply chain problems,” he said.

He added that he wanted official development assistance-funded projects to be built in priority areas identified by the government.

However, an agrarian reform advocacy group said farm-to-market roads would be beneficial to farmers only when these agricultural workers have land security.

“It is a good step, especially in isolated rural areas. The access roads serve as the bridge of farmers to the highways going to market centers,” Katarungan secretary general Danny Carranza said in a phone interview on Tuesday.

However, he argued that the farm-to-market roads “will be useless” if the farmers’ ownership of the agricultural lands would not be secured.

Carranza cited the case of agrarian reform beneficiaries in Sariaya town in Quezon province where P187 million worth of farm-to-market roads were constructed using government loans.

“The farmers in the area may be rendered totally landless as their certificate of land ownership awards (Cloa) are being canceled and their right to the land being seriously undermined by the decision of the courts to exempt the land from the agrarian reform program,” Carranza explained.

Citing information from the government, Carranza said farm-to-market road projects worth P300 million were again being planned in Sariaya.

“The farmers are now asking: Who will benefit from such projects?” he said.

He appealed to Mr. Marcos to review the situation and see what could be done to ensure that farmers, considered some of the most progressive in the province, would not be deprived of their land and continue to produce food.

Sariaya farmers produce about 600,000 tons of assorted vegetables a year, according to the group. These are distributed to nearby provinces in the Calabarzon (Cavite, Laguna, Batangas, Rizal, and Quezon) region, Metro Manila, and parts of Bicol region.