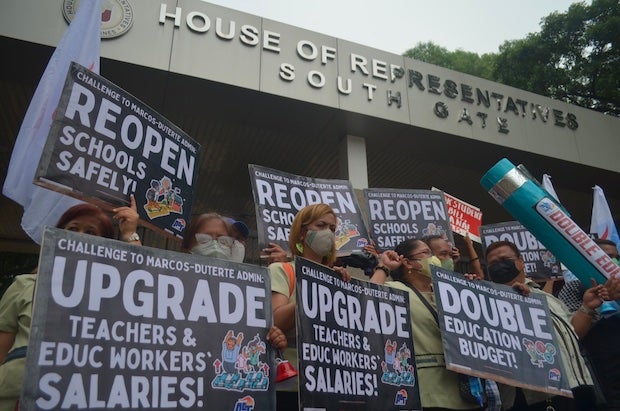 Members of the Alliance of Concerned Teachers staged a rally outside the House of Representatives on Monday, July 18, 2022, to press for a raise in teachers’ wages and the education budget. (Photo from the Facebook account of ACT)

MANILA, Philippines — The Alliance of Concerned Teachers (ACT) hopes the administration of President Ferdinand Marcos Jr. and Congress would listen to its plea for a larger education budget and higher wages for teachers to help them cope with current economic hardships.

ACT members staged a rally outside the House of Representatives complex on Monday to voice out their sentiments.

Vladimer Quetua, ACT national chairperson, said teachers were relying on the Marcos administration, unlike the previous one, to address those issues.

“The cost of goods has risen and it will rise again in the coming days. But the salaries of teachers have not gone up,” Quetua said in Filipino.

“Inflation is at 6.1 percent. The prices of diesel, gasoline, and kerosene have risen by more than P30 per liter since January. And the value peso has fallen. This is how bad the country’s economy is. It’s time to correct the distortion in wages given by the government, in which the salaries of teachers have been left behind by those of other professionals,” he said.

“We had already been duped by the Duterte administration. So we’re hoping now that the new administration will listen to us regarding the hardships we have been enduring and the need to have a meaningful raise in our salaries,” he added.

House Bill No. 1783 – the Education as Priority in the National Appropriations Act, authored by Castro and other Makabayan bloc lawmakers —seeks to allocate at least 6 percent of the gross domestic product to education.

House Bill No. 203 – authored by Castro, Gabriela Rep. Arlene Brosas, and Kabataan Rep. Raoul Manuel — seeks to increase the salary of entry-level public school teachers from Salary Grade 11 to Salary Grade 15 — which corresponds to around P16,000.

“They [teachers] even have to take on odd jobs just to make ends meet and feed their families,” he added.

Earlier, Castro also called for the realignment of P32 billion to the education sectors’ maintenance and other operating expenses, to ensure the safe opening of schools under the return to a face-to-face system.

ACT said that the supplementary funds could be taken from the government’s income from the excise tax on oil products.

“While our salaries are low, teachers are the ones who always pay for the insufficiency of the education budget. We are forced to spend on classroom repairs and on buying school equipment. The learning crisis will not be resolved and the quality of education will not be raised if this situation remains in our schools,” he added.

—WITH A REPORT FROM CHRISTINE ANNIE ASISTIO (TRAINEE)

Teachers use own money, resources as distance learning weighs heavy on them