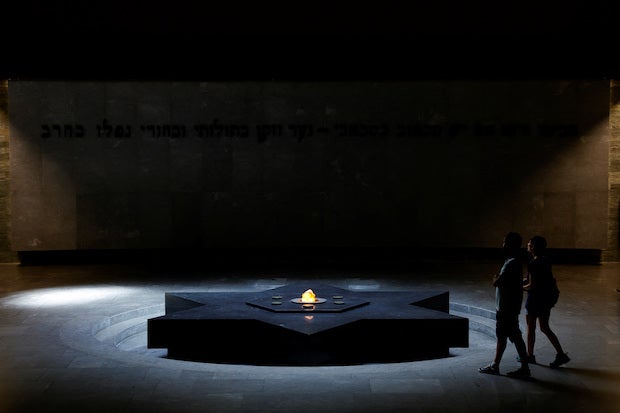 People visit the crypt inside the Shoah Memorial as France commemorates the 80th anniversary of the Vel d’Hiv roundup, in Paris, France, July 12, 2022. (REUTERS/Sarah Meyssonnier)

PARIS — When the police came knocking on the door of his eastern Paris home on July 16, 1942, 15-year-old French Jew Joseph Schwartz was no longer there. Forewarned, he and his father Lejbus had gone into hiding.

He had assumed his mother Ruchla and younger brother Paul would be safe — the few roundups of Jews that had already taken place had only targeted men.

But the authorities had widened the net. That day and the next, entire families were snatched from their homes in the largest mass detention of Jewish people by French police in collaboration with Nazi occupiers.

Around 13,000 people were taken to the Winter Velodrome south of Paris before being sent to concentration camps across Europe.

Among them were Ruchla, Paul, and Lejbus, who turned himself to the police, hoping it would spare his wife and child – in vain. Joseph would never see them again.

“I didn’t know where to go, I was in an altered state,” said Schwartz, now 95 and one of the last survivors of the roundup still alive today.

“You leave your parents one day, everything is ok, you’re kissed, looked after, and the next there’s no one.”

As France commemorates the 80th anniversary of the Vel d’Hiv roundup, authorities are in a race against time to collect witness accounts from elderly survivors.

“How will we continue to commemorate when there are no survivors left? There’s not many of us left who were 15 at the time,” Schwartz told Reuters.

The Shoah Memorial in Paris, which collects archives on France’s Holocaust victims, launched an appeal to reach the last Vel d’Hiv witnesses and survivors.

“We were surprised to hear from about 40 people,” Lior Lalieu-Smadja, head of the Memorial’s documentation department, said. The last people to come forward had never told their story before, she added. “Eighty years after the facts… they said it was a duty, an emergency to do it.”

The Memorial has collected billions of archived documents and thousands of photographs, but many of the stories have already been lost, Lalieu-Smadja said.

The work to preserve them was crucial, to record the past and keep up the fight against anti-Semitism in the present, she added.

Looking back on it now, the thing that shocks Joseph Schwartz most is the fact that the police were granted medals for resistance after the liberation of Paris.

“For people like me who have lived through this episode, it’s an insult to our dead. When you know that eight days before liberation, we were still living in fear of Paris police roundups… that’s enough to feel disillusioned,” he said.

Remembering the Holocaust in honor of Jews, JWs, other victims