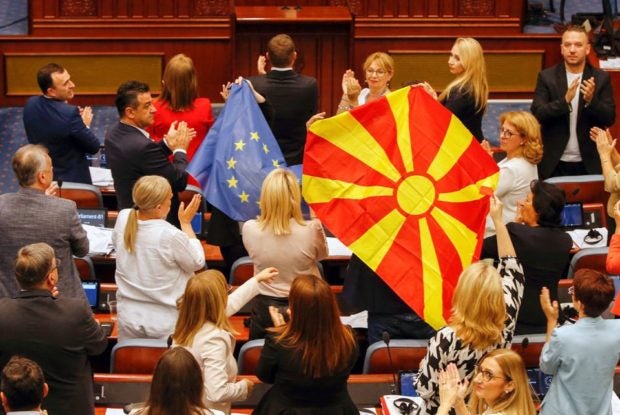 North Macedonian members of Parliament from the ruling SDSM party, hold European Union and North Macedonian flags, during a parliamentary debate on a French-brokered deal aimed at settling disputes with Bulgaria and clearing the way to EU membership, in Skopje, North Macedonia, July 16, 2022. REUTERS

SKOPJE — Lawmakers in North Macedonia on Saturday passed a French-brokered deal aimed at settling a dispute with Bulgaria and clearing the way to long-due European Union membership talks.

With 68 votes, the 120-seat parliament voted in favour of the agreement. Opposition lawmakers did not participate in the vote and left the room.

“Today we are opening a new perspective for our country…from today we are moving with accelerated steps to join the EU family,” Prime Minister Dimitar Kovacevski said in a press conference after his cabinet approved parliament’s conclusions.Kovacevski said the first meeting between his government and the EU would be held on Tuesday.

The deal proposes that North Macedonia’s constitution be amended to recognize a Bulgarian minority. The proposal does not require Bulgaria to recognize the Macedonian language.

In exchange, Bulgaria will allow its West Balkan neighbor to start membership talks with the EU. After the agreement was adopted, governing party deputies rolled out EU and North Macedonian flags. 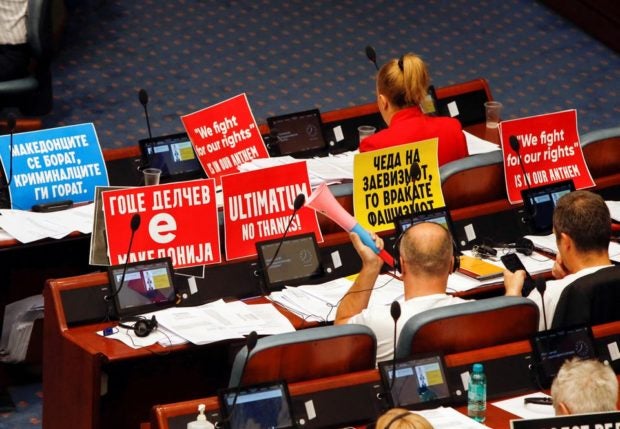 A VMRO-DPMNE member of parliament, North Macedonia’s biggest opposition party, plays a vuvuzela and displays signs, during a parliamentary debate on a French-brokered deal, aimed at settling disputes with Bulgaria and clearing the way to European Union membership, in Skopje, North Macedonia July 16, 2022. REUTERS

European Commission President Ursula von der Leyen, who traveled to Skopje and urged lawmakers on Thursday to vote the deal, said the vote “paves the way for opening the accession negotiations rapidly.”

Albania’s Prime Minister Edi Rama, whose country has been held back because the EU has linked its progress to that of North Macedonia, said an Albanian delegation would travel to Brussels on Monday to start membership talks.

The leader of the biggest opposition party VMRO-DPMNE, Hristijan Mickoski, whose party protested against the deal since the beginning of July, said “nothing was over”. He added his party would not back constitutional changes which require two-thirds of the vote.Bulgaria’s parliament lifted its veto on Macedonian-EU talks last month. This also triggered protests in Bulgaria and contributed to a no-confidence vote that toppled the government.

North Macedonia, a former Yugoslav republic, has been a candidate for EU membership for 17 years but approval for talks was first blocked by Greece and then by Bulgaria.