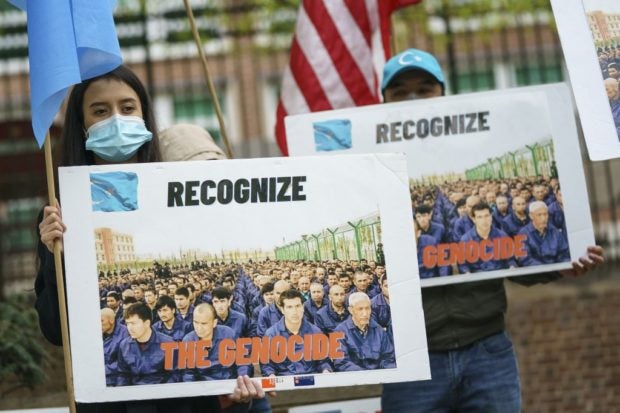 Supporters of the East Turkistan National Awakening Movement rally in front of the British Embassy ahead of an April 22 vote in the British House of Commons on whether or not to declare that a genocide is underway in Xinjiang province and Chinas treatment of the Uyghur Muslims on April 16, 2021 in Washington, DC. (Photo by Drew Angerer / GETTY IMAGES NORTH AMERICA / Getty Images via AFP)

Beijing, China — Chinese President Xi Jinping made a public visit to Xinjiang, state media reported Friday, his first since a crackdown in the region saw Beijing accused of detaining over a million Uyghurs and other Muslim minorities in camps.

The United States and lawmakers in other Western countries have labelled China’s actions in Xinjiang a “genocide,” imposing sanctions over the alleged human rights abuses.

Beijing has denied the allegations, calling them the “lie of the century” and insisting that its policies have helped combat the threat of Islamic extremism.

State news agency Xinhua said Xi hailed the strides made during an inspection tour of the far-western region — his first since 2014, when three people were killed in an attack that presaged the start of the mass detention campaign three years later.

He also reportedly praised the work of the Xinjiang Production and Construction Corps (XPCC), a sprawling paramilitary organization sanctioned by the United States for alleged human rights abuses.

The group had made “great progress” in reform and development, Xinhua reported Xi as saying during a Wednesday trip to the city of Shihezi in the region’s north.

The Chinese leader’s sojourn to Xinjiang comes after a similarly rare visit earlier this month to another formerly restive territory, Hong Kong, where authorities have come down hard on the city’s once-thriving pro-democracy movement.

It also comes ahead of a key party congress later this year, when Xi is widely expected to break with decades of Communist Party precedent and secure a third consecutive term at the helm of the world’s second-largest economy.

Rights campaigners accuse China of a litany of abuses in Xinjiang, including mass incarceration, forced labor, compulsory sterilization, and the destruction of Uyghur cultural and religious sites.

Beijing vehemently rejects the claims and insists the centers are vocational and voluntary training facilities.

It claims the allegations are part of a plot by the United States and other Western nations to smear China and contain its rise.

During a rare visit to China in May, Michelle Bachelet, the United Nations’ human rights chief, urged Beijing to avoid “arbitrary and indiscriminate” measures in Xinjiang.

But she acknowledged the harm caused by “violent acts of extremism” and declined to call her trip an “investigation.”

Bachelet’s remarks were criticized by campaigners and former detainees, who accused her of capitulating to a stage-managed tour of the region orchestrated by Beijing.