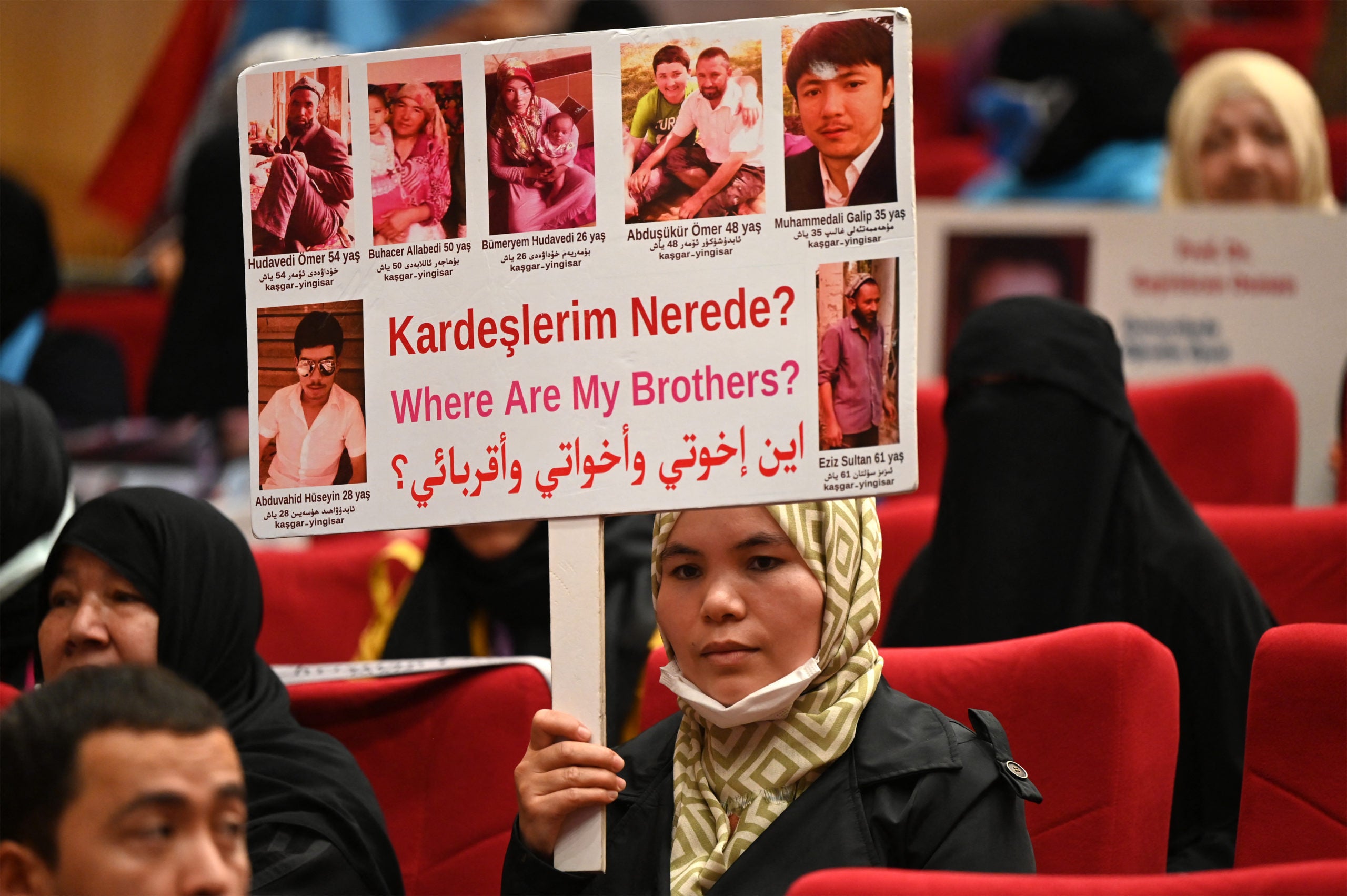 Members of Muslim Uyghur minority present pictures of their relatives detained in China during a press conference in Istanbul, on May 10, 2022. – Turkey’s Uyghur community urged UN human rights chief to probe so-called “re-education camps” during a long-delayed visit to China this month including to Xingjiang, where Western lawmakers have accused Beijing of genocide. UN human rights chief Michelle Bachelet announced in March she would visit China in May as rights groups demand that her office release its long-postponed report on the rights situation in Xinjiang. (Photo by Ozan KOSE / AFP)

BEIJING — A leaked list of thousands of detained Uyghurs has helped Nursimangul Abdureshid shed some light on the whereabouts of her missing family members, who have disappeared in China’s sweeping crackdown on Xinjiang.

Researchers estimate over one million Uyghurs and other mostly Muslim minorities are being held in a secretive network of detention centers and prisons, ostensibly as part of an anti-terrorism campaign after a series of attacks.

Yet information on the crackdown in Xinjiang region — and those who have been ensnared by it — is closely guarded by China’s Communist authorities.

That has left relatives unable to contact detainees or seek answers from police, with just a fraction of court notices from Xinjiang publicly available.

Abdureshid, who now lives in Turkey, lost contact with her family five years ago.

It took until 2020 for the Chinese embassy in Ankara to confirm that her younger brother Memetili, as well as her parents, had been imprisoned for terrorism-related offences.

But a suspected police list leaked to Uyghur activists outside China has located Memetili in a prison outside the city of Aksu, some 600 kilometers (375 miles) from their home.

He was sentenced to 15 years and 11 months in jail, the documents show — a figure confirmed by Beijing’s embassy in Ankara.

“It is much better than not knowing anything about where he is. There is a small happiness,” Abdureshid, 33, told AFP from Istanbul, where she has lived since 2015.

“I check the weather there sometimes, to see if it is cold or warm.”

The previously unreported database, which has been seen by AFP, lists over 10,000 imprisoned Uyghurs from southwestern Xinjiang’s Konasheher county — including over 100 from Abdureshid’s village.

Her parents’ location remains a mystery, as well as that of an older brother who is also believed to be detained.

Abdureshid recognized the names of seven other villagers on the list of detainees — all small business owners or farm workers who she says would not have links to terrorism.

It has not been possible to independently verify the authenticity of the database.

But AFP has interviewed five Uyghurs living outside China who identified detained relatives and acquaintances on the list.

For some it was the first information they have been able to access about their relatives in years.

Hundreds were detained from each township and village, the database shows, often many from the same household.

“This is not clearly-targeted anti-terrorism,” said David Tobin, lecturer in East Asian Studies at the University of Sheffield in Britain.

“It’s going to every door and taking a number of people away. It really shows they’re arbitrarily targeting a community and dispersing it across a region.”

People were jailed for broad charges including “gathering a group to disrupt social order”, “promoting extremism” and “picking quarrels and provoking trouble”.

Many other Uyghurs, never charged with any crimes, were sent to what activists call “re-education camps” spread across Xinjiang.

At these camps, which Beijing calls “vocational training centers”, foreign governments and rights groups have found evidence of what they say are forced labor, political indoctrination, torture and forced sterilization.

The United States and lawmakers in a number of other Western countries have described Beijing’s treatment of the Uyghurs as genocide.

UN human rights chief Michelle Bachelet is due to make a long-awaited visit to China including Xinjiang this month. But activists warn access will likely fall well short for an independent probe of China’s alleged abuses.

Someone from every house

As Beijing’s “Strike Hard” ideological campaign against Islamic extremism ramped up in 2017, the proportion of prison sentences of over five years nearly tripled from the year before.

Most were handed down in closed-door trials.

Norway-based Uyghur activist Abduweli Ayup told AFP he recognized the names of around 30 relatives and neighbors on the leaked list.

“My cousin was just a farmer. If you ask him what is ‘terrorism’, he couldn’t even read the word, even less understand it.”

A second suspected leaked police database seen by AFP identifies another 18,000 Uyghurs, mostly from Kashgar and Aksu prefectures, detained between 2008 and 2015.

Of these the vast majority were charged with vague terrorism-related offences.

Several hundred were linked to the 2009 Urumqi riots in which nearly 200 people died. Over 900 individuals were accused of manufacturing explosives.

One Uyghur living in Europe who wishes to stay anonymous told AFP he recognized six friends on the second list, including one who was 16 at the time of detention.

“I was devastated to see so many people I knew,” he told AFP.

Beijing vehemently denies it is persecuting Uyghurs and other Muslim minorities in Xinjiang.

Instead, it describes its treatment of the Uyghurs as a legitimate response to extremism, and says it has spent billions of dollars on economic renewal of the poor region.

“We have already refuted some organizations’ and individuals’ fabricated lies about Xinjiang,” the Chinese foreign ministry wrote in response to AFP questions on the leaked list.

Yet from her small, plant-filled apartment in Istanbul, Abdureshid tries to pull together the semblance of a normal life from the dislocation, fear and loss now attached to being Uyghur.

She only recently told her young daughter about her missing relatives and says the leaked list was a sharp reminder of the struggle of her people.

“My pain just doubled,” she said.