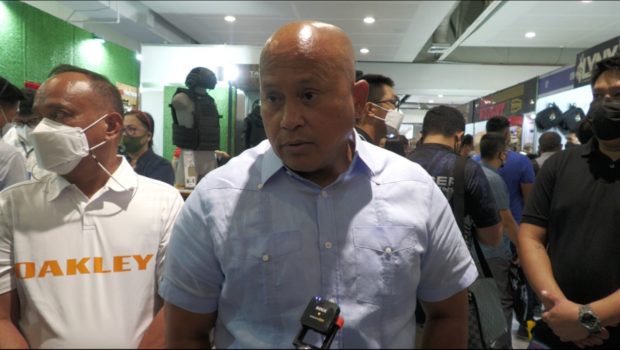 Senator Ronald “Bato” dela Rosa answers questions from the media on the sidelines of the 28th Defense and Sporting Arms Show in Mandaluyong City on Thursday, July 14, 2022. INQUIRER.net/Beatrice Pinlac

MANILA, Philippines — Senator Ronald “Bato” dela Rosa on Thursday emphasized the need to institutionalize the National Task Force to End Local Communist Armed Conflict (NTF-Elcac) even if there are calls for its abolition.

Dela Rosa filed his 20 priority bills for the 19th Congress last week, which included the institutionalization of the government’s anti-insurgency task force.

But various progressive groups reiterated their call for the government to dismantle the NTF-Elcac, especially after four community organizers and unionists were recently reported missing.

“What do you expect from progressive groups? Since time immemorial, puro naman sila oppose nang oppose (they just keep opposing and opposing). We expect that to happen. But then again, they cannot stop me from authoring this bill because ang purpose nito ay nation-building (its purpose is nation-building),” dela Rosa insisted when asked about his reaction to the latest demand of certain organizations against NTF-Elcac.

Dela Rosa likewise claimed that institutionalizing the NTF-Elcac would help stop the Communist Party of the Philippines and the New People’s Army (CPP-NPA) from regaining their hold over communities.

(Right now, the CPA-NPA forces have grown weaker; if we don’t institutionalize the NTF-Elcac, they will rise anew. They will reincarnate, and our country will suffer. It will be a problem again. And every aspect will be affected, from the economy to peace and order. It’ll be another headache for us, so they shouldn’t be able to return to our communities.)

The NTF-Elcac has usually earned flak for its controversial pronouncements, especially on red-tagging personalities deemed critical of the government.

Previously, its former spokesperson Lorraine Marie Badoy claimed there is no danger to life when an individual is tagged as a communist.