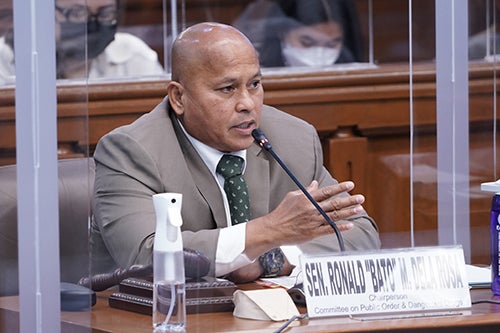 MANILA, Philippines — Senator Ronald “Bato” Dela Rosa is seeking the passage of a measure that will institutionalize the government’s anti-insurgency task force through legislation.

Atop dela Rosa’s top 20 priority measures filed on Tuesday in the 19th Congress was his Elcac Act aimed at systematizing the agency.

“Just institutionalizing Elcac through legislation so that there will be continuity of the program despite changes in the national leadership,” the senator explained in a text message when asked about his bill.

According to dela Rosa, there is no specific budget proposal in the bill as funding would be sourced from the annual budget of member agencies of the task force.

“There is none because there [are] no Elcac funds,” he pointed out. “These are agency funds that are component of the yearly budget of each member agency.”

The task force membership is currently composed of the heads of various government agencies. The President of the Philippines has been designated as chairman of the task force, while the National Security Adviser will serve as its vice chairman.

Some senators had earlier proposed to defund the task force following its alleged red-tagging and profiling of community pantry organizers.

But dela Rosa, who headed the Philippine National Police, rejected the move, saying defunding the NTF-Elcac would only benefit the communist rebels.