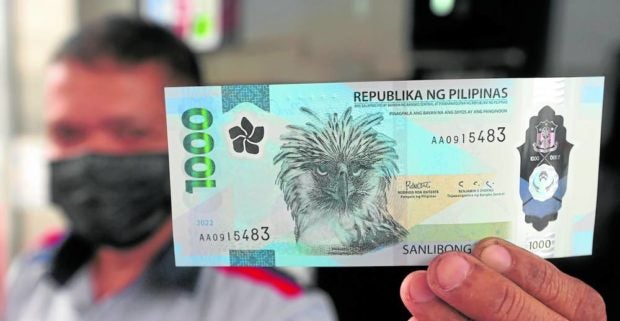 MONEY TALK | The central bank says creased bills such as the P1,000 note shown in this July 12 file photo by an attendant at a gas station in Timog Avenue, Quezon City, remain acceptable for payment. (Photo by NIÑO JESUS ORBETA / Philippine Daily Inquirer)

MANILA, Philippines — The new P1,000 bill remains legal tender and should be honored even if folded, contrary to complaints by netizens on social media about their folded polymer banknotes being rejected by malls and other establishments.

Banknotes — whether made from paper or polymer — that have been creased remain acceptable for payment and banks and business entities, especially retailers, should accept these for transactions, the Bangko Sentral ng Pilipinas (BSP) said on Tuesday.

The BSP issued the advisory following stories that a retailer refused to accept a 1,000-peso polymer banknote, part of the new bills that went into circulation last April, because it was folded.

Also, netizens were abuzz about a social media post from the police enumerating “prohibited” practices in handling the polymer bill that could land them in jail.

The central bank issued last month guidelines on the proper handling of polymer banknotes, discussing “Dos and Don’ts” in handling the new banknotes.

These included storing banknotes in bi-fold wallets where they fit properly, keeping them clean.

The BSP also advised users not to deface or write on the polymer banknotes; “not excessively” fold, crease or crumple them as “these could leave permanent fold marks”; not tear, cut or poke holes in them, and not to staple them or use rubber bands to hold them together.

Users were also advised not to use a clothes iron to attempt to remove folds or creases.

They were likewise advised not to damage the clear windows, metallic features, and other security features of the polymer banknotes.

The central bank said these guidelines on handling applied not only to the new polymer banknotes but also to the older paper-based series of peso bills.

Part of the confusion was traced to a Facebook post on a page named “PCADG Central Luzon” that mentioned the BSP’s guidelines in handling the banknotes in Filipino, but used the word “bawal” or prohibited.

At the end of the list, the post warned that those who violated such prohibitions were liable to a fine of P20,000 at most and a jail term of not less than five years.

This caused a stir among netizens, who lamented that using the new polymer banknotes was such a hassle and could even send someone to jail.

The penalties mentioned were from Presidential Decree No. 247, which was issued in 1973.

However, this martial law era legislation provided that the fine and jail term were for those who “willfully deface, mutilate, tear, burn or destroy, in any manner whatsoever, currency notes and coins issued by the Central Bank of the Philippines.”

On Monday, Albay Rep. Joey Salceda sought further clarification from the BSP for business establishments to honor the new polymer bills even if these were folded, altered, or damaged.