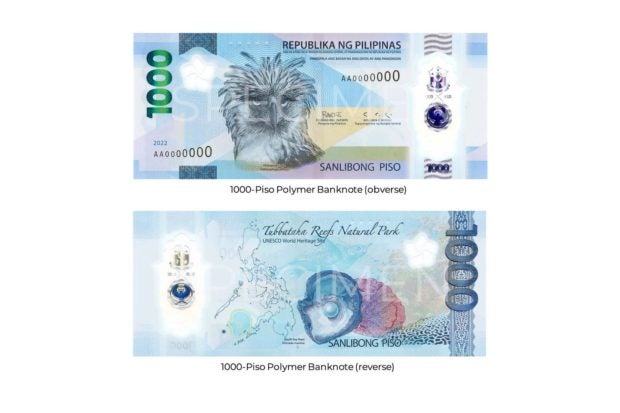 MANILA, Philippines — The governor of the Bangko Sentral ng Pilipinas (BSP) was asked to clarify the rules and validity of the new polymer P1,000 bills after warnings were issued that it was not advisable to fold these bank notes, sparking a firestorm of criticism on social networking sites.

Albay 2nd District Rep. Joey Salceda said on Monday that he had written a letter request to BSP Governor Felipe Medalla, urging him to answer queries about the new bills amid confusion on whether the bill would lose value once folded, which supposedly damages the more-durable paper.

The lack of clarifications, Salceda said, has led to different interpretations of how the new bills should be handled, including rumors that some establishments do not accept folded P1,000 bills.

“I understand that one of the primary motivations for shifting to the polymer-based bill was that it is more durable than the paper bills. However, the lack of guidelines on what constitutes still-valid legal tender and which bills are damaged beyond being acceptable by business establishments has led to confusion in ordinary cash transactions,” Salceda said in a statement.

The lawmaker who used to head the House of Representatives’ ways and means committee said that BSP should issue guidelines on accepting the bills and possibly exchanging them should they be damaged.

Salceda said that theoretically, the value of the bills is not affected by their appearance as “what matters is the validity of the promise embedded in the currency.”

“As such, to resolve these concerns, may I request that the Bangko Sentral ng Pilipinas (BSP) issue guidelines on accepting polymer P1000 bills, and what remedial recourses cash-holders can resort to, should their polymer bills no longer be acceptable to establishments,” he said.

“I understand that, with the paper bills at least, damaged bills could still be exchanged with banks and the BSP,” he added.

BSP shifted to polymer bills from the previous abaca-made currencies due to the former being supposedly more durable than the original tender. This is keeping in line with the health protocols brought by the COVID-19 pandemic, as frequent hand washing and alcohol use exposes bills to more moisture, which would damage the abaca-made money.

But several netizens have claimed that there were malls that refrained from accepting the folded P1,000 bills. In a previous interview with OneNews, Medalla instead urged people to shift to longer wallets, drawing the ire of netizens, especially women, as the BSP chief was accused of being sexist for noting that women would have an easier time as they prefer handbags and longer wallets.

The public uproar has also resulted in quirky netizens making jokes about the sensitivity of the new bills, placing them on glass frames as they go to malls.

Salceda believes folded money and unfolded money should have the same value — noting that switching to polymer bills from abaca is meaningless if it cannot sustain a fold.

“Money is fungible, so you should be able to exchange one bill with another and not lose value. One folded bill should be just as good as a bill not folded,” he said.

“If the polymer bills are more sensitive and less flexible than the paper bills, the whole effort sort of defeats its own purpose, which is to make paper bills more durable,” he added.

He also stressed that several countries like Australia and Canada use polymer bills but are not very strict about it.

“Anyway, I hope Philip [Medalla] directs the issuance of guidelines soon. We are not the only currency using polymer. Australia and Canada also do, and they’re not quite as finicky about the bills,” Salceda noted.