MANILA, Philippines—A social media post has gone viral after circulating over the weekend and showing a frustrated netizen complaining that a popular mall refused to accept her slightly folded 1,000-peso polymer banknote.

In her post, Lopez shared her frustration, advising the public not to keep or store their new P1,000 polymer banknotes.

“Don’t store new [1,000-peso bill]! As per SM’s management, it should not have folds,” Lopez said in Filipino on the original social media post.

“I was supposed to use [the banknote] for payment, but the mall did not accept it. We were not informed beforehand. Am I the only one who doesn’t know about this?” 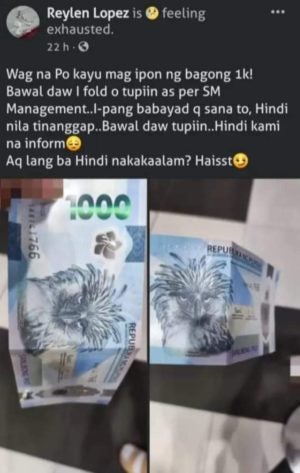 INQUIRER.net reached out to Lopez, who detailed the story behind her now-viral social media post.

According to Lopez, she went to a branch of SM Retail Store on Friday (July 8) around 6:45 PM to cash in or deposit her money into her bank account.

“I already gave the transaction code to the teller [of the mall’s customer service]. I was about to pay when the teller saw that my [1,000-peso banknote] was folded,” Lopez said in Filipino.

She said the teller explained to her that as per the mall’s policy, they do not accept folded P1,000 polymer bills.

Lopez also told INQUIRER.net that the P1,000 polymer banknote that the teller refused to accept was only “slightly folded” since she placed it in a folding wallet. However, she emphasized that the bill she had was not excessively folded and that it had no permanent marks.

“So I said ‘why was I not aware of this?’ I tried to argue because I’m also a teller, I also handle money every day and yet I was not informed about the said policy,” said Lopez, who works as a teller for her family’s business.

“I was so frustrated because I had no idea, I was not informed even though we are also trained when it comes to detecting counterfeit money and what we should and should not accept,” she added.

Lopez said she has seen several slightly folded P1,000 polymer banknotes since May, a month after the Bangko Sentral ng Pilipinas released the new polymer-based banknotes.

“That’s why I said in my post to not keep or store those P1,000 bills because, as it turns out, it was really delicate and prone to folds and creases,” she said.

She said she had used slightly folded P1,000 polymer banknotes in other establishments in the past and encountered no issues with those transactions.

However, the bank was already closed then, so she decided instead to deposit the banknote through a cash deposit machine. Unfortunately, the machine did not accept her money.

“Maybe the machine cannot read the new 1,000-peso bill yet,” she said.

Frustrated, Lopez then went to a fast-food chain and used the slightly folded P1,000 polymer banknote to pay for her food. She said the cashier accepted it.

Lopez said she was frustrated over the mall’s policy, which she described as “OA” or overacting.

In an official statement, SM Supermalls assured the public that folded banknotes are being accepted in SM Retail Stores.

“In response to the information circulating on social media regarding the new Ps1000 bill, we would like to assure the public that folded bank notes are still accepted in our SM Retail Stores,” SM Supermalls said.

“Only those that are mutilated – stapled and ripped caused by [the] removal of staple wire—will be deemed unfit and not accepted. Our policy has considered the guidelines set by the Bangko Sentral ng Pilipinas,” it added.

“We encourage the public not to engage with the misleading social media posts.” 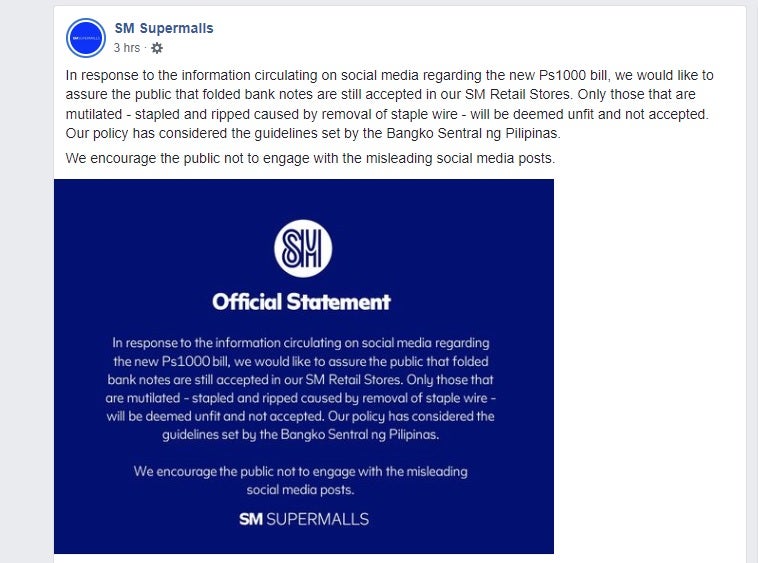 Lopez told INQUIRER.net that someone from the BSP has already reached out to her regarding the incident, which she said is now under investigation.

She said that she had already asked the said BSP employee if she had any violation after getting her P1,000 polymer banknote slightly folded.

The BSP, according to her, said she did not violate anything and that only excessively folded polymer banknotes are considered unfit for recirculation and will not be accepted by establishments or for any transaction.

According to BSP, when polymer banknotes and paper banknotes get excessively folded, crumpled, and creased, they could have visible and permanent fold marks.

Among the visual description of banknotes that are under the criteria of unfit for recirculation include:

Meanwhile, a banknote is considered mutilated, if it fitted any of the following visual descriptions:

The central bank has also previously reminded the public on how to properly handle the 1,000-peso polymer banknotes.

According to BSP’s guidelines, here are ways of properly handling polymer banknotes:

The BSP emphasized that “banknotes with fold marks may still be recirculated and used as payment for goods and services.”

Lopez advised the public to not panic in case other people encounter a similar situation where an establishment refuses to accept folded P1,000 polymer banknotes.

“As much as I know, banks can replace those banknotes. Just in case your banknotes get accidentally folded, the banks will accept it,” she said.

“Don’t be afraid and think that your banknotes will no longer have any value just because it was accidentally folded,” she added.

In an official statement released on Monday, BSP clarified that folded paper or polymer banknotes can still be used for payments and transactions. This was amid the concerns and issues raised by people online following Lopez’s viral social media post.

“The Bangko Sentral ng Pilipinas (BSP) informs the public that folded banknotes, whether paper or polymer, can still be circulated and accepted for payment. As such, retailers and banks should accept them for day-to-day payment transactions,” BSP said in the statement.

The central bank likewise explained that the recent BSP-issued guidelines on the proper handling of polymer banknotes also apply to the existing paper banknotes.

“The handling guidelines were issued to raise public awareness on the proper use of polymer and paper banknotes to safeguard their integrity and prolong their lifespan,” said BSP.

“If an individual is doubtful on the value and/or authenticity of a banknote, he or she is encouraged to go to any bank for assistance. The bank will then refer the banknote to the BSP for examination.”