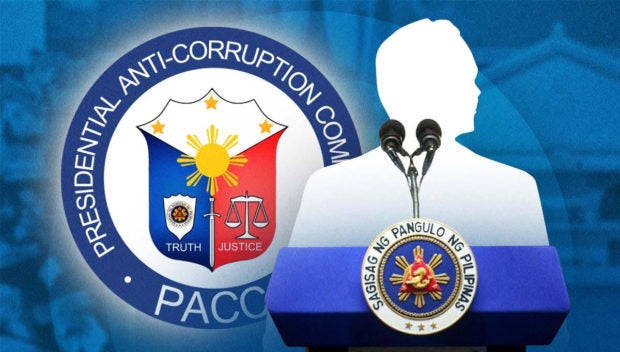 MANILA, Philippines—Among President Ferdinand “Bongbong” Marcos Jr.’s first official acts was to abolish the Presidential Anti-Corruption Commission (PACC), drawing a warning from its former head that the move could weaken the fight against corruption.

Greco Belgica, who headed the PACC in 2021, said that PACC plays a key role especially when the deputy executive secretary for legal affairs (DESLA) has its hands full of cases to investigate. Without PACC, Belgica said, “no one would know what is happening, most especially on corruption issues.”

He told ANC last Thursday (July 7) that when people are not aware of corruption in the government because cases are not resolved, “corruption will proliferate because no one gets penalized.”

Belgica, who ran for senator in the May 9 elections with a promise to wage war on corruption, made the comment as Marcos’ Executive Order No. 1 transferred PACC functions to the DESLA. 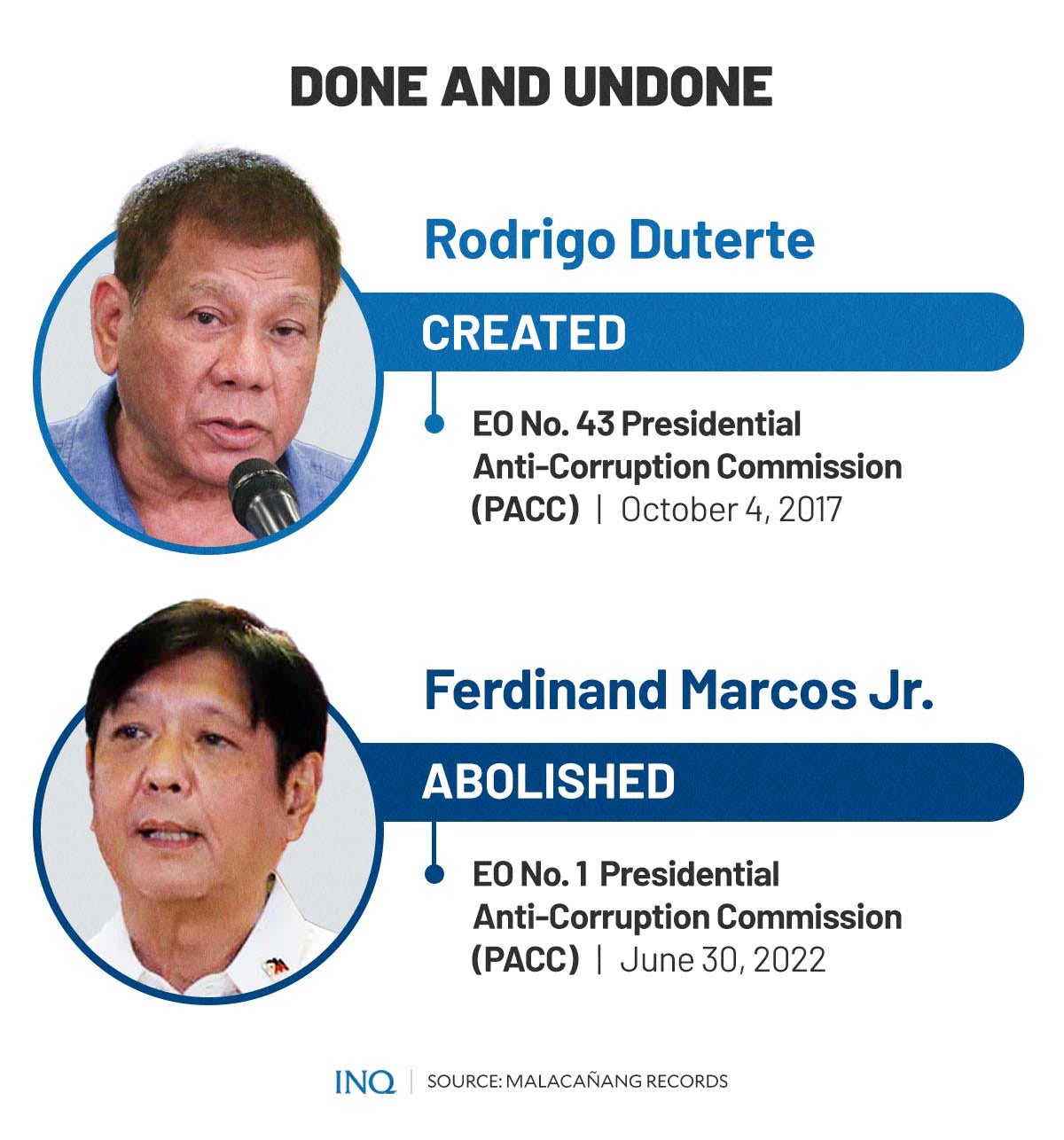 Marcos’ first EO, which was signed on June 30, said that the DESLA shall promulgate rules of procedure in administrative cases under its jurisdiction, provided that those promulgated by the PACC “shall remain in force”.

The problem, however, is that the PACC came from DESLA. Belgica said that while the legal affairs office works against corruption, it is also handling the “external and internal legal issues of the President.”

“Corruption is a serious issue in the Philippines,” he said while stressing that the PACC, during his tenure, had resolved thousands of concerns, even cases that piled up from the three administrations before President Rodrigo Duterte.

Belgica said that from October 2017 to June 2022, the PACC addressed 13,000 complaints and that 154 criminal and administrative cases had been filed, 24 individuals were sent to prison and 800 government employees were removed from office.

This, as the officials—Assistant Public Works Secretary for Regional Operations of Visayas, Metro Manila, and Mimaropa and two DENR directors—issued a permit for a dredging project that did not comply with the process and existing laws. 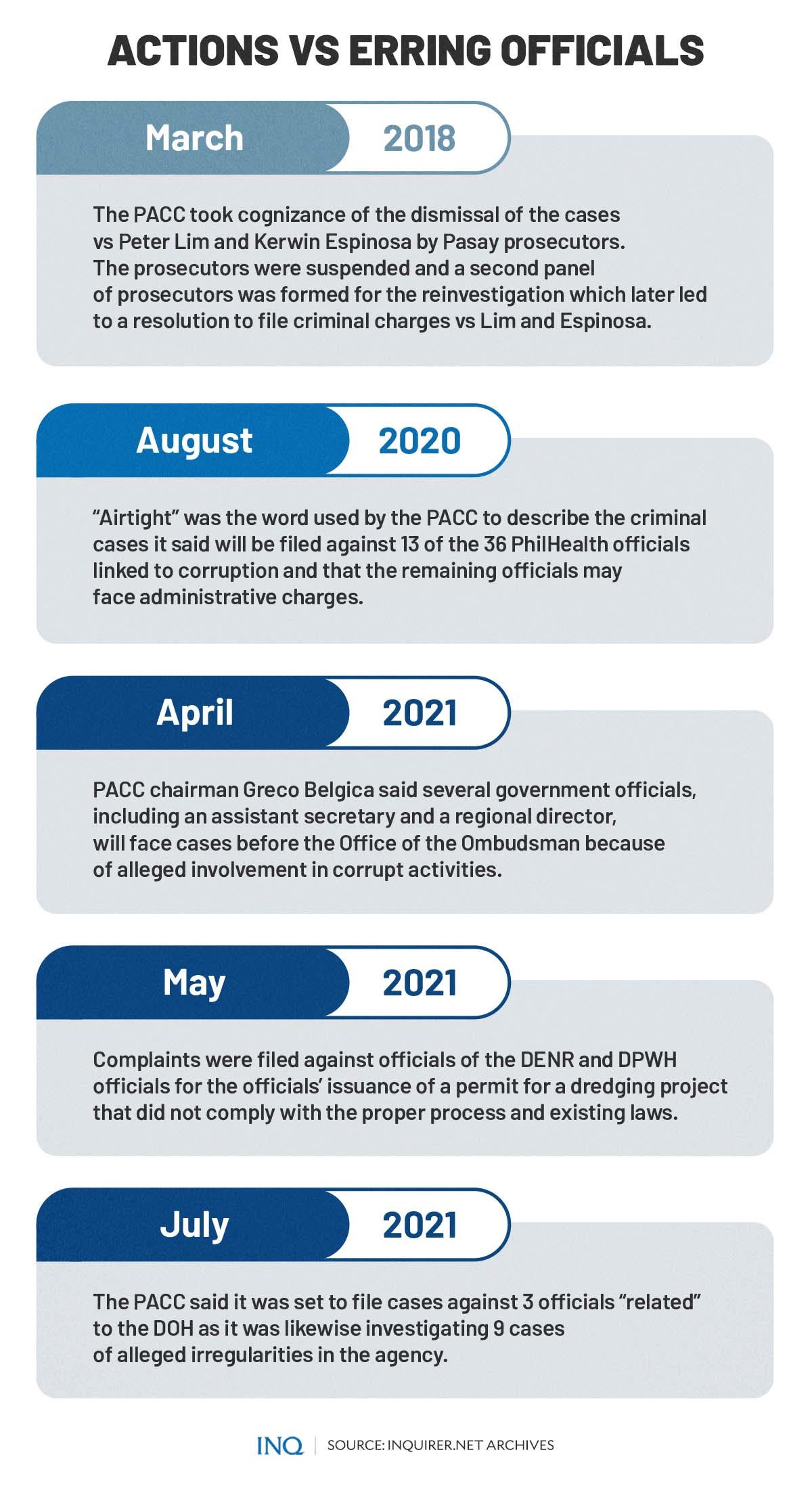 Back in 2020, “airtight” was the word used by the PACC to describe the criminal cases it said will be filed against 13 of the 36 officials of the Philippine Health Insurance Corp. who were linked to corruption.

RELATED STORY: PACC to file cases against at least 3 officials ‘related’ to DOH

Last year, a lifestyle check investigation against a DPWH official for violation of the Anti-Graft and Corrupt Practices Act and in relation to Section 2 of Republic Act No. 1379 was also forwarded to the Office of the Ombudsman.

No need to retain PACC

Last week, Solicitor General Menardo Guevarra said that in his first meeting with Marcos on July 5, the President gave officials a free hand to reorganize their agencies and streamline operations.

“I think the deactivation of the PACC was along that line, but surely it was not because the PACC was ineffective,” said Guevarra, who served as justice secretary under Rodrigo Duterte.

Guevarra said “as former justice secretary I had a meaningful collaboration with the PACC in the overall campaign against corruption in government.” In Marcos’ EO, the PACC was abolished to achieve “simplicity, economy, and efficiency.”

Last Friday (July 8), Press Secretary Trixie Cruz-Angeles said there was no need to retain the PACC, saying that its powers and functions are “not in line with streamlining.”

“First of all, its nature is investigative, which can also be conducted by the Office of the Ombudsman. So, usually, what they do is they gather evidence on presidential appointees and file the case with the Ombudsman,” she said.

Cruz-Angeles stressed that a complainant can directly file a complaint at the Office of the Ombudsman for investigation: “There are government agencies that address this already so there’s no further need for a PACC.”

Marcos’ EO stated that to achieve “simplicity, economy, and efficiency” in bureaucracy without effecting disruptions in internal management and general governance, “the administration shall streamline official processes and procedures.”

Lawyer Tony La Viña, former dean of the Ateneo School of Government, said Marcos’ decision to deactivate the PACC was needed, saying that its work “can be done by the Office of the Executive Secretary (OES).”

“It’s really a superfluous office,” he told CNN Philippines last Friday (July 8), stressing that the OES can immediately investigate. “It’s much faster that way without a commission,” he said.

La Viña earlier told ANC that he agreed with Marcos’ decision because “I always thought, ever since, that it is a body to just throw things to whenever there is a scandal.”

He stressed that Marcos made the right decision, saying that “we have the Ombudsman, the Civil Service Commission, and the President himself can create any body every time that there is something to be investigated within his ranks.”

“It’s a signal that he wants to be an efficient President. The signal is not even to the people. It’s a signal to the rest of the government that we’re not going to have a bureaucracy that’s too complicated,” he said.

Last April, Marcos promised to also strengthen the Presidential Commission on Good Government to target all corruption cases in the government. “Give them more staff […] then they file a case at the Ombudsman,” he told CNN Philippines.

READ: Marcos, if elected, vows to ‘strengthen’ PCGG to target all corruption cases

The PACC, which was created by Duterte’s EO No. 43 in 2017, had the mandate to “directly assist the President in investigating and/or hearing administrative cases primarily involving graft and corruption against all presidential appointees.”

The EO stated that “there is a need to create a separate commission […] solely dedicated to providing assistance to the President in the investigation and hearing of administrative cases and complaints.”

It likewise had the mandate to conduct lifestyle checks or fact-finding investigations concerning presidential appointees and other public officers allegedly involved in graft and corrupt practices.

While Belgica stressed that he respects the decision of Marcos, he said he is hoping that the government will strengthen the fight against corruption: “If DESLA will not get a boost, like enough staff, we will go back to the old problem.”

Duterte’s EO provided that the PACC shall “have the power, on complaint or motu proprio (on its own), and concurrently with the Office of the Ombudsman, to hear, investigate, receive, gather, and evaluate evidence, intelligence reports, and information.” 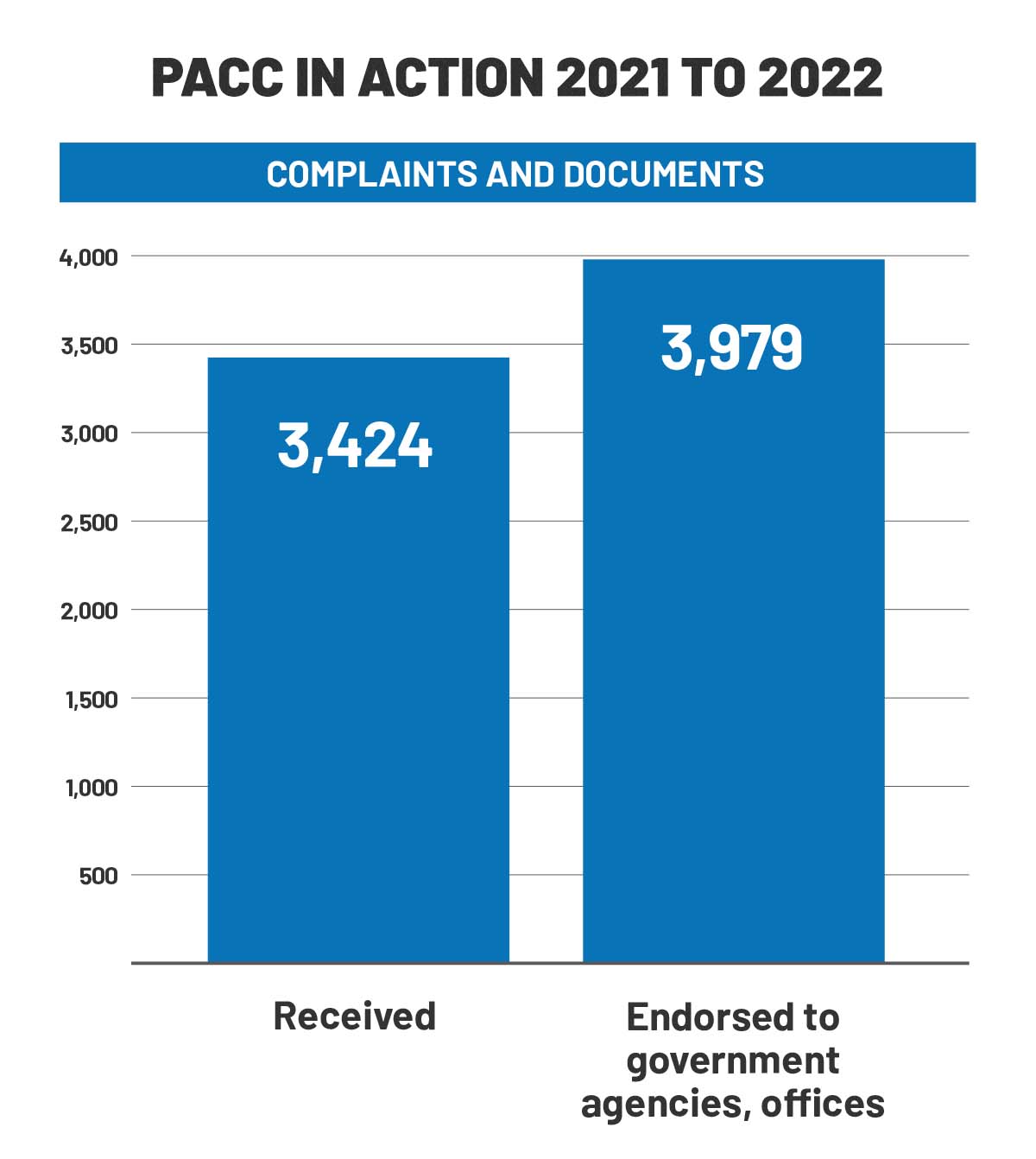 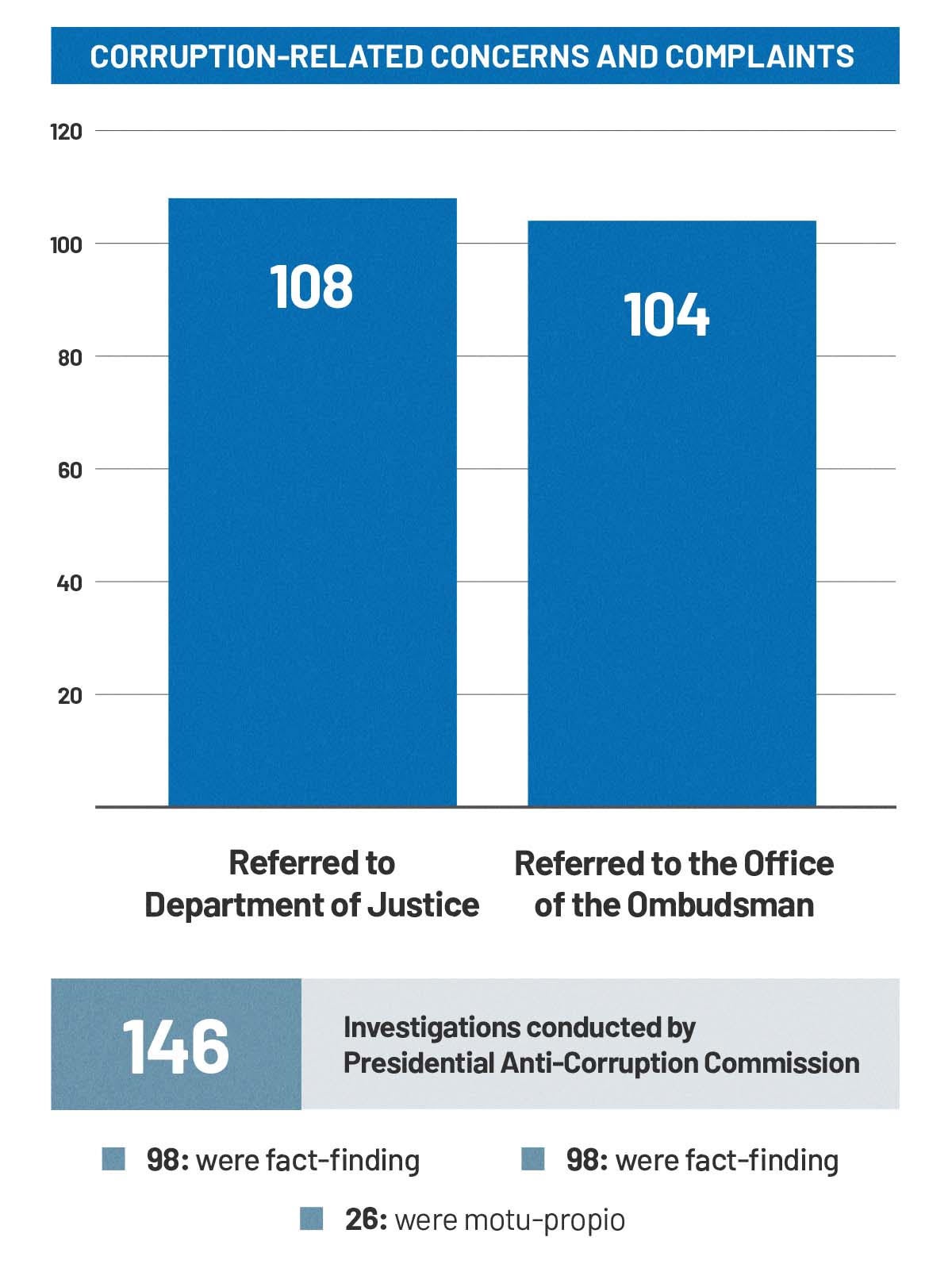 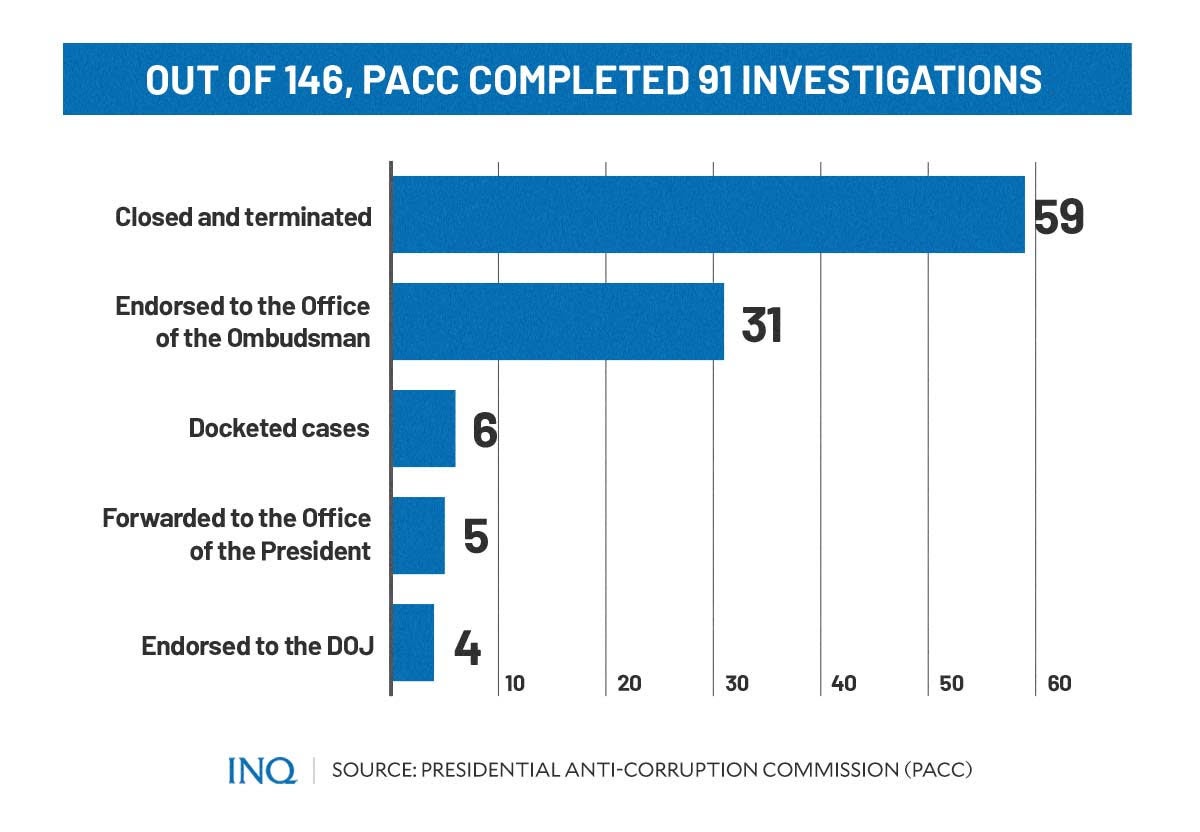 Based on data from the PACC, from 2019 to 2020, 1,409 complaints were received and 1,722 complaints, including those from previous years, were investigated. It said 172 cases were handled by its investigation service—77 of which were “concluded”.

Two were forwarded to the Office of the President (OP), 25 were referred to the adjudication services, 32 were closed and terminated, 12 were endorsed to other agencies, three were lifestyle checks, and three were archived.

In its almost five years of existence, the PACC was also not spared from controversies, like the one in January 2021, when a doctor from Basilan filed complaints against Belgica. 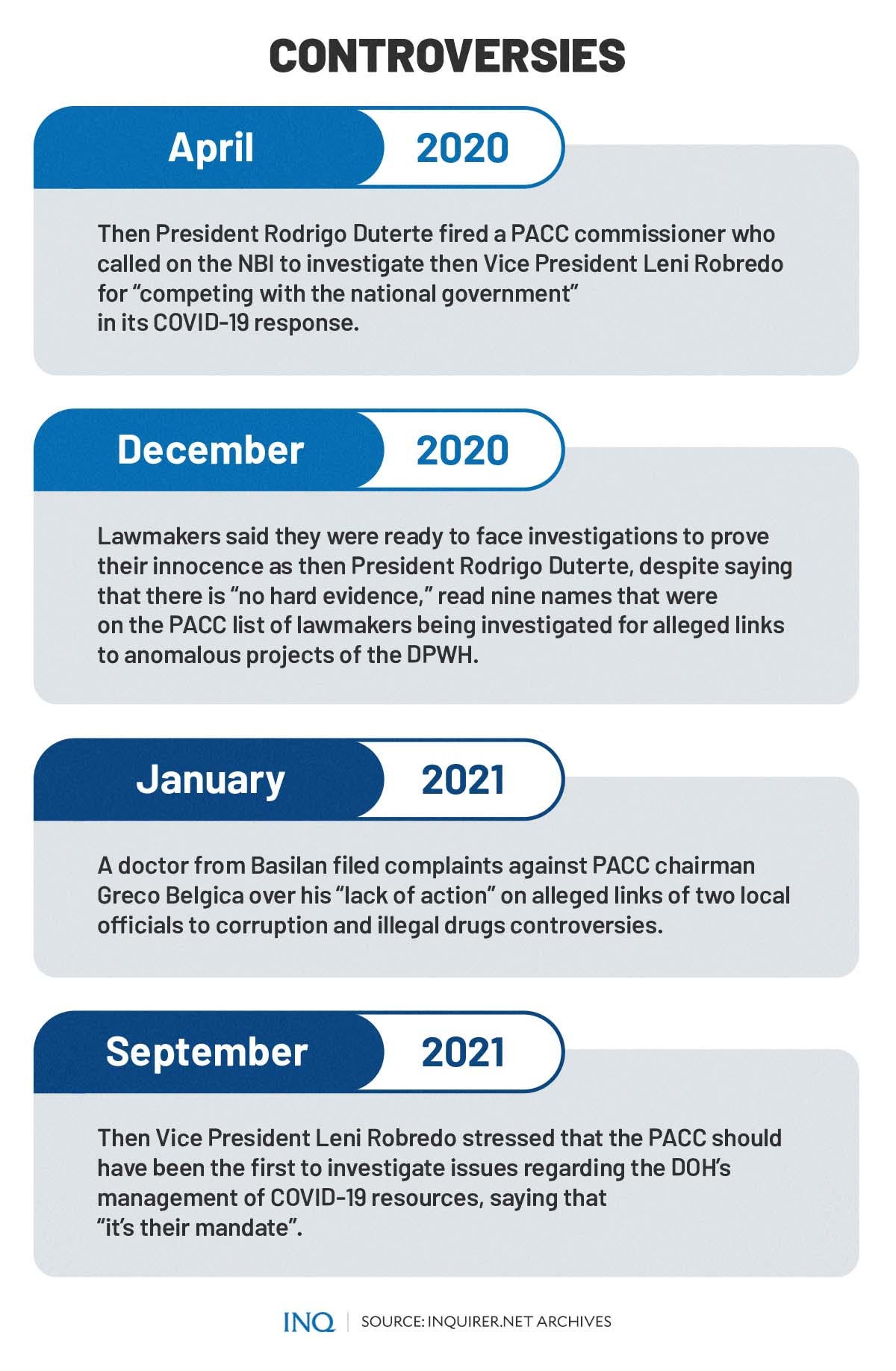 Belgica was charged with gross neglect of duty before the Ombudsman for allegedly failing to act on the doctor’s complaint regarding the “involvement” of two local officials in corruption and illegal drugs.

Back in April 2020, Duterte fired PACC commissioner Manuelito Luna, who called on the National Bureau of Investigation to probe then Vice President Leni Robredo for “competing with the national government” in its COVID-19 response.

In December 2020, lawmakers who were on the PACC list of public officials being investigated for alleged links to anomalous projects of the DPWH asserted that they were ready to prove their innocence.

This, as Duterte, despite saying that there is “no hard evidence,” read nine names from the said list. In January 2021, the district engineers who were on the commission’s corruption list were relieved from office.

In September last year, Robredo stressed that the PACC should have been the first to investigate the issues regarding the Department of Health’s (DOH) management of COVID-19 resources, saying that “it’s their mandate”.