Marcos, if elected, vows to ‘strengthen’ PCGG to target all corruption cases 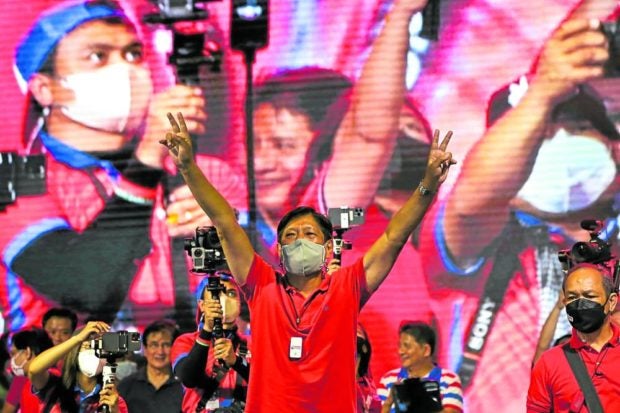 MANILA, Philippines — Instead of the agency just training all its efforts against the Marcoses’ ill-gotten wealth, presidential candidate Ferdinand “Bongbong” Marcos Jr. said on Tuesday he will strengthen the Presidential Commission on Good Government (PCGG) to target all graft and corruption cases in the government if he gets elected in the upcoming elections.

In an interview with CNN Philippines aired Tuesday, Marcos was asked about his plans for the PCGG should he be elected.

PCGG, a quasi-judicial body, has the primary mandate of recovering the ill-gotten wealth accumulated by his father and namesake, former President Ferdinand Marcos Sr., his immediate family, relatives, subordinates and close associates.

Asked how he will strengthen the agency, Marcos Jr. said: “Instead of directing themselves against the Marcoses only, I mean if I have–kung mayroon akong corrupt na kamag-anak, edi lalabas yung pangalan n’ya. But not only us, lahat.”

According to Marcos, times have changed and the PCGG can be utilized to go after erring public officials.

According to the accomplishment report of the PCGG, it has so far recovered P172.4 billion. It is still trying to recover more than P125 billion more of the family’s ill-gotten wealth, which is still tied up in litigation.

Meanwhile, on the issue of his family’s ill-gotten wealth, he said he will let the courts do their work.

If elected president, will PCGG be abolished? ‘I have not thought about it’, Marcos says