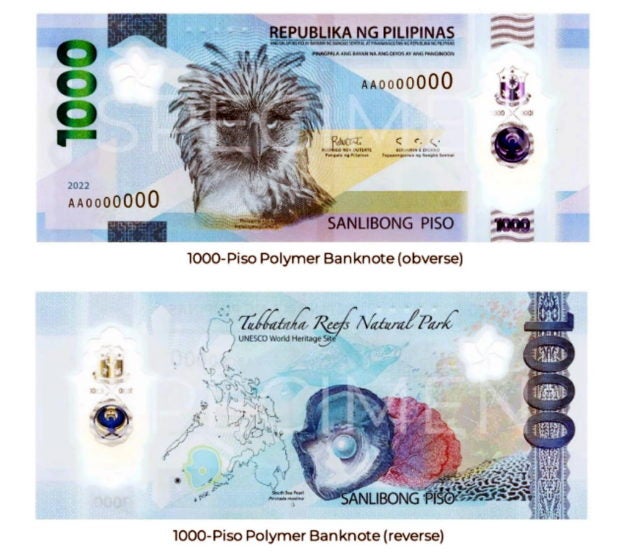 MANILA, Philippines — Mind that new P1,000 bill in your hands. It might not be honored if damaged or even just simply folded.

Albay Rep. Joey Salceda on Monday sought further clarification from the Bangko Sentral ng Pilipinas (BSP) for business establishments to honor the new polymer bills even if they are folded, altered, or damaged.

The new notes went into circulation last April. The lawmaker said “one of the primary motivations” for the shift to that material was that it was “more durable than the paper bills.”

“However, the lack of [new] guidelines on what constitutes still-valid legal tender and which bills are damaged beyond being acceptable by business establishments has led to confusion in ordinary cash transactions,” Salceda said.

Last month, the BSP issued guidelines on the proper care of polymer bills. It advised against folding them and also urged users to keep the bills clean, wiping them with a damp, then dry cloth.

Netizens had complained on social media about their folded polymer bills being rejected by malls and other establishments.

BSP Governor Felipe Medalla had also suggested that the notes be kept in longer wallets and purses to avoid having to fold them.

In a letter to Medalla, Salceda called for “remedial recourses [which] cash holders can resort to, should their polymer bills no longer be acceptable to establishments.”

“In theory and in usual practice, the value of money is not affected by its appearance. What matters is the validity of the promise embedded in the currency. That should determine the value,” Salceda said.

“Money is fungible [or replaceable], so you should be able to exchange one bill with another and not lose value,” he stressed.

“One folded bill should be just as good as a bill not folded.”

He pointed out further that “if the polymer bills are more sensitive and less flexible than the paper bills, the whole effort sort of defeats its own purpose, which is to make paper bills more durable.”

“I also have problems with enforcing the prohibitions against folding the bill. How do you tell who did what? There isn’t a record of who held which bills,” Salceda said.

“I hope Philip [Medalla] directs the issuance of guidelines soon. We are not the only currency using polymer. Australia and Canada also do, and they’re not quite as finicky about the bills,” he added.

Other notes are due to be replaced by polymer bills, and Salceda said he has set a meeting with the BSP regarding this and other matters.