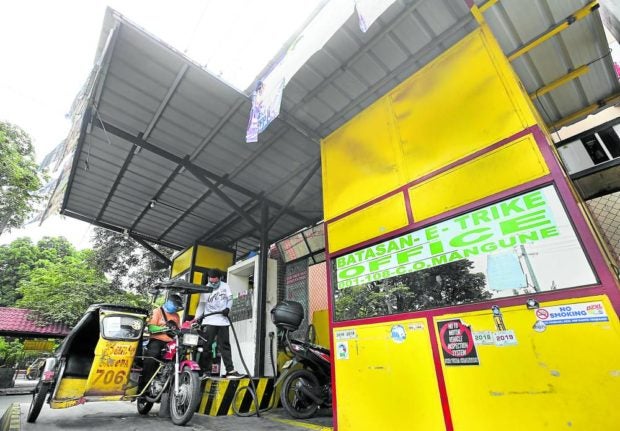 CHEAPER FUEL | A tricycle driver on Monday refuels at a pocket gasoline station built at a terminal in Barangay Batasan Hills, Quezon City. Members of Batasan Tricycle Operators and Drivers Association get a P2-discount from this station, which is a partnership between the city government and a private company. (Photo by LYN RILLON / Philippine Daily Inquirer)

MANILA, Philippines — Motorists are getting another reprieve as oil companies on Monday announced a big-time fuel price rollback starting Tuesday.

In separate advisories, oil firms said the prices of gasoline decreased by P5.70 a liter and diesel by P6.10. Kerosene, primarily used for cooking and lighting, especially in the provinces, declined by P6.30 a liter.

This is the second straight week that diesel and kerosene prices dropped, and the first for gasoline after being unchanged last week.

On July 5, oil companies reduced the prices of diesel by P3 a liter and kerosene by P3.40.

The latest adjustments cut the cumulative increase in local pump prices of petroleum products since the start of the year to P36.80 a liter for diesel, P24.30 for gasoline, and P31.35 for kerosene.

In Metro Manila, a liter of gasoline ranges from P76.45 to P96.15 a liter, according to the Department of Energy’s price monitoring. Diesel has caught up and, at some point, exceeded the selling price of gasoline as it is being sold for P81.20 to P95 a liter. Kerosene, meanwhile, retails for P86.80 to P95.74 a liter.

Oil companies announce any increase or decrease in local pump prices every Monday, which are then implemented the following day.

Various factors are taken into consideration in setting domestic fuel prices, including import costs that account for more than half of the pump prices, as well as taxes and the industry’s profit margin.

Meanwhile, a party-list lawmaker on Monday called for the creation of a buffer fund that would absorb the frequent oil price spikes in the country.

One Patriotic Coalition of Marginalized Nationals (1-Pacman) party-list Rep. Michael Romero raised the option of reviving the Oil Price Stabilization Fund (OPSF), created by the late President Ferdinand Marcos at the height of the oil crisis in the 1970s.

“We should revive the OPSF or establish a similar buffer fund, which the government could use to avoid frequent adjustments in the pump prices of oil products due to fluctuations in the cost of crude oil in the world market and in the peso-dollar exchange rate,” Romero said in a statement on Monday.

Romero cited the “weekly wild swings” in domestic fuel costs which are expected to continue as supply disruptions persist due to the ongoing Russia-Ukraine war, thus the need for a buffer fund to absorb the price fluctuations.

Aside from the conflict in Ukraine, he pointed out that oil prices would remain “volatile and elevated” due to global recovery efforts from the COVID-19 pandemic, with economies needing more oil to fuel their factories.

Romero explained that the buffer mechanism would answer for certain price increases so they would no longer be passed on to the public.

The 1-Pacman lawmaker proposed that the buffer fund be sourced from the excise imposed on diesel, gasoline, cooking gas and other oil products under the Tax Reform for Acceleration and Inclusion (TRAIN) Act.

“Since the government is not agreeable to the suggested suspension of excise taxes while the cost of crude is above $80 per barrel, we could use part of these impositions as a price stabilization fund to provide relief to the public from increased fuel and consumer prices,” he said.

Romero expressed hope that President Ferdinand Marcos Jr. would consider the creation of a buffer fund or revive the OPSF, which his late father and namesake started in 1971 and renamed the OPSF in October 1984 through Presidential Decree No. 1956.

Under the decree, the OPSF was sourced from fuel taxes and was used “to reimburse the oil companies for cost increases on crude oil and imported petroleum products resulting from exchange rate adjustment and/or increase in world market prices of crude oil.” The oil firms were to contribute to the fund when petroleum prices declined.

The OPSF was administered by the then Ministry (now Department) of Energy, which was authorized to invest in fixed-income instruments with earnings accruing to the stabilization fund.