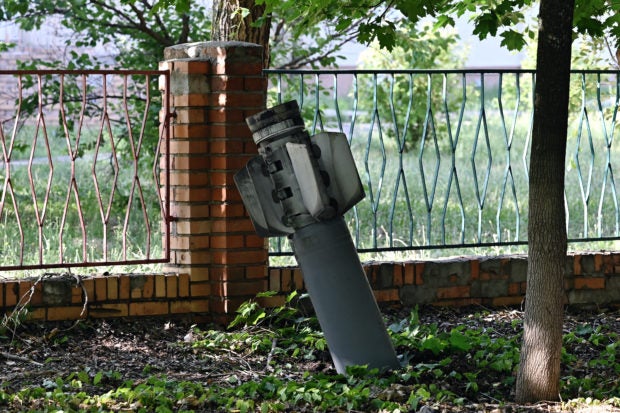 A photograph taken on July 3, 2022 shows an tail section of a 300mm rocket which appear to contained cluster bombs launched from a BM-30 Smerch multiple rocket launcher embedded in the ground after shelling in Kramatorsk, amid the Russian invasion of Ukraine. AFP

Jail for Russians who cooperate with foreigners

In a bill harkening to the Soviet era, establishing and maintaining “confidential” cooperation with a foreigner or international organisation and helping them act against Russia’s interests will be punishable by up to eight years in prison.

Public calls to act against Russia’s security will be punished by up to seven years in prison.

They are part of an unprecedented crackdown on dissent under President Vladimir Putin which has intensified since he sent troops into Ukraine.

Ukrainian officials call on civilians to urgently evacuate Sloviansk as Russian troops step up their bombardment of the city in their push to conquer the Donbas region of Donetsk.

At least two people were killed and seven others wounded in Sloviansk on Tuesday as rockets slammed into a marketplace and surrounding streets, bringing to at least eight the numbers killed in Russian strikes since Sunday.

Britain’s defense ministry in an intelligence note predicts that “the battle for Sloviansk will be the next key contest in the struggle for the Donbas” after the fall of the cities of Severodonetsk and Lysychansk.

Russian Foreign Minister Sergei Lavrov reacts angrily to the publication of a call between President Emmanuel Macron and Russian leader Putin on the eve of the war, calling it a breach of “diplomatic etiquette”.

The details of the confidential February 20 call were revealed by the broadcaster France 2 in a documentary on the French president’s handling of the conflict.

In the exchange, Putin describes the 2014 Euromaidan revolution that brought pro-Western leaders to power in Ukraine as a coup.

At Macron’s insistence, however, he agrees in principle to the idea of a meeting with US President Joe Biden in Geneva. Four days later, he sent troops into Ukraine.

Lavrov said Russia had nothing to be ashamed of.

Former Russian president Dmitry Medvedev suggests the world could be headed for nuclear war if the International Criminal Court (ICC), which is investigating allegations of war crimes in Ukraine, punishes Moscow for its suspected crimes.

“The idea to punish a country that has the largest nuclear arsenal is absurd in and of itself,” Medvedev, a close ally of Putin, says on messaging app Telegram. “And potentially creates a threat to the existence of mankind,” he added.

Medvedev, who was Putin’s stand-in president between 2008 and 2012, is deputy head of the Security Council. He has regularly assailed the West on social media since the war began.

Nato tells AFP it has no plans to send troops to Sweden and Finland once they complete the membership process launched this week.

“We don’t plan to have an additional presence in either country, they have formidable national forces. They’re capable of defending themselves,” Deputy Secretary General Mircea Geoana says in a telephone interview.

Putin has warned that Moscow will “respond symmetrically” if Nato installs troops and infrastructure in the Nordic states.