Marcos’ inaugural address: What was said, promised, left behind 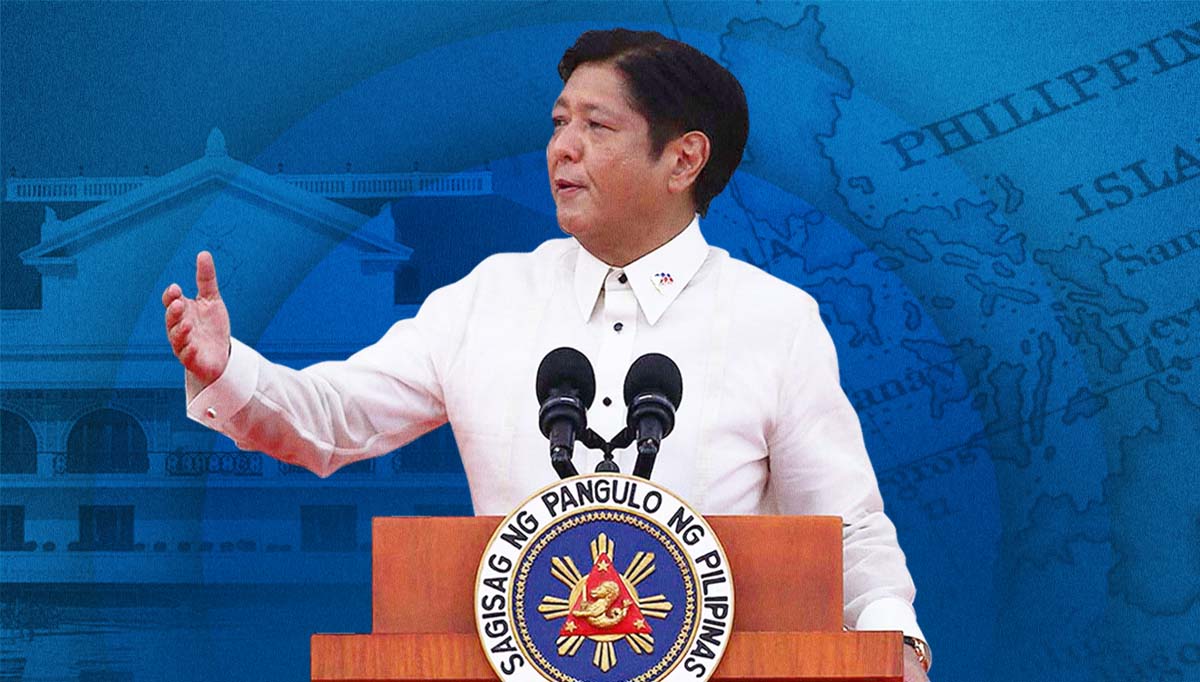 MANILA, Philippines—Last June 30, Ferdinand “Bongbong” Marcos Jr.’s inaugural address as the 17th president of the Philippines focused on looking at the country’s future, rather than looking back at the past—while giving tribute to his late father and namesake.

Marcos, who won by a big margin in the 2022 presidential race after getting over 31 million votes, took his oath of office at noon of June 30 at the National Museum grounds in Manila—a historical location that has hosted the inauguration of some of the country’s former leaders.

Following the oath-taking, Marcos delivered his very first speech as a sworn-in president—in which he mentioned some of his administration’s priorities and promises, like fixing the former administration’s shortcomings.

Unity, which was Marcos and Vice President Sara Duterte’s campaign slogan, was also mentioned in the new president’s speech.

When it comes to history—a topic that has been haunting the president and his family, especially during the whole campaign period, because of the late Marcos’ more than 20-year reign as Philippine ruler—the new president in his speech, however, chose to encourage the public to look forward and to not look back.

Still, the newly-elected president did not forget to give tribute and praise to his late father’s legacy.

In this article, INQUIRER.net will dissect Marcos’ inaugural address and examine the highlights of the speech, as well as false claims, and topics that were left unsaid and undiscussed.

Not dwelling on past

In his speech, which was around 2,800 words and 25 minutes long, one of the first things Marcos dwelt heavily on was about focusing on the country’s future under his administration.

“I am here not to talk about the past,” he said, “I am here to tell you about our future.”

“A future of sufficiency, even plenty of readily available ways and means to get done what needs doing—by you, by me. We do not look back, but ahead. Up the road that we must take to a place better than the one we lost in the pandemic,” he continued.

However, Marcos did not forget to mention and hail his father and the late dictator’s legacy.

“I once knew a man who saw what little had been achieved since independence in a land filled with people with the greatest potential for achievement, and yet they were poor. But he got it done. Sometimes, with the needed support. Sometimes, without,” he said.

“So, will it be with his son. You will get no excuses from me.”

The so-called “golden age” of strongman rule—as claimed by the Marcos family and their supporters—during the late president’s administration became a huge factor in wooing voters and supporters for the younger Marcos’ campaign during the elections last May.

Marcos also claimed in his speech that his father also built “more and better roads.”

Although the president could not help harking back to the days of “glory” under his father, his speech did not mention or discuss the allegations of human rights violations, corruption, and ill-gotten wealth amassed by the late dictator.

READ: Bongbong Marcos: We do not look back, but ahead

The new president did not only look back at his father’s days as the former leader of the country. Parts of his inaugural address also bore a resemblance to portions of two of his father’s inaugural speeches delivered decades ago. 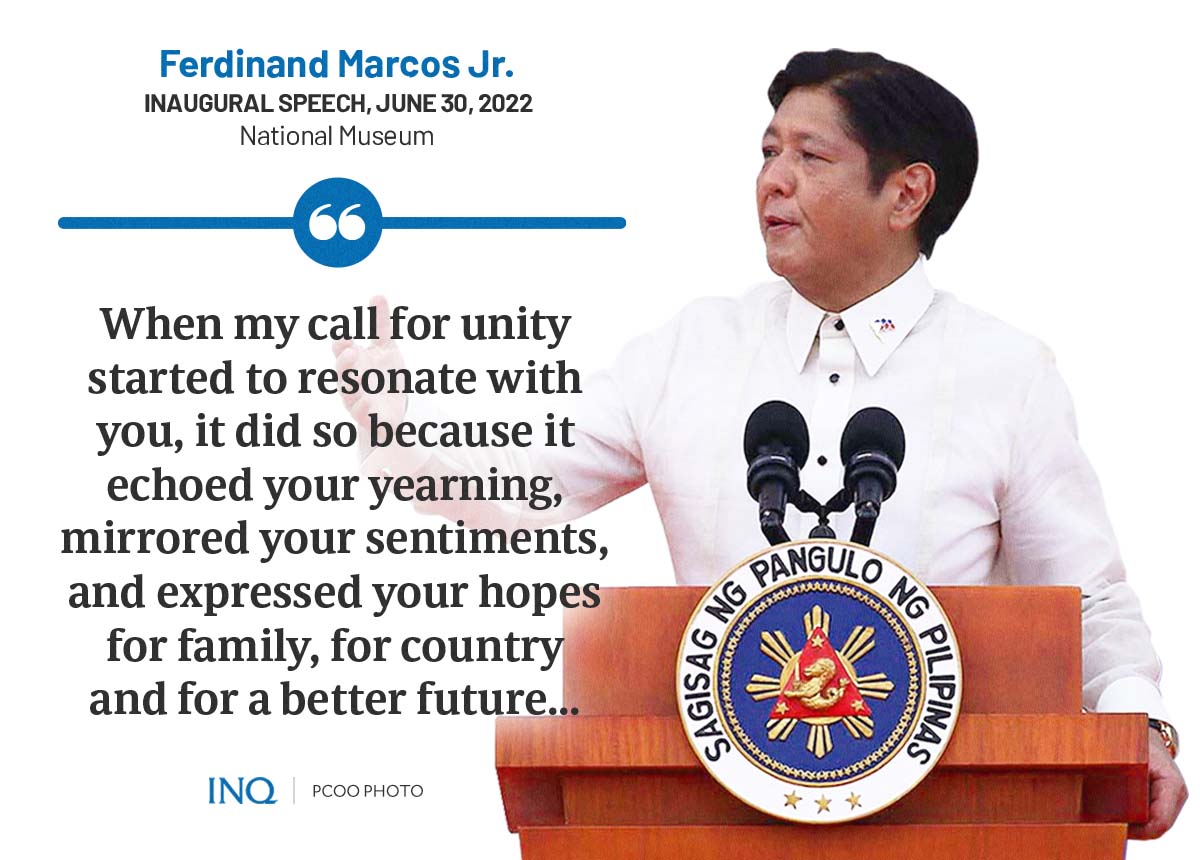 In his speech, the new president said:

“Your dreams are mine. Your hopes are my hopes. How can we make them come true? How can we do it together? But I will take it as far as anyone with the same faith and commitment can as if it depended entirely on himself.”

On Dec. 30, 1965, the late Marcos said almost the same line during his inaugural address delivered at the Quirino Grandstand.

“This is your dream and mine. By your choice, you have committed yourselves to it. Come then, let us march together towards the dream of greatness,” said Marcos Sr.

Another key part of the newly sworn-in president’s speech was when he talked about unity.

“When my call for unity started to resonate with you, it did so because it echoed your yearning, mirrored your sentiments, and expressed your hopes for family, for country, and for a better future,” he said.

“I believe that if we focus on the work at hand, and the work that will come to hand, we will go very far under my watch. You believe that too. And I listened to your voices who are calling for unity, unity, and unity. We will go further together than against each other, pushing forward not pulling each other back out of fear, out of a misplaced sense of weakness.” 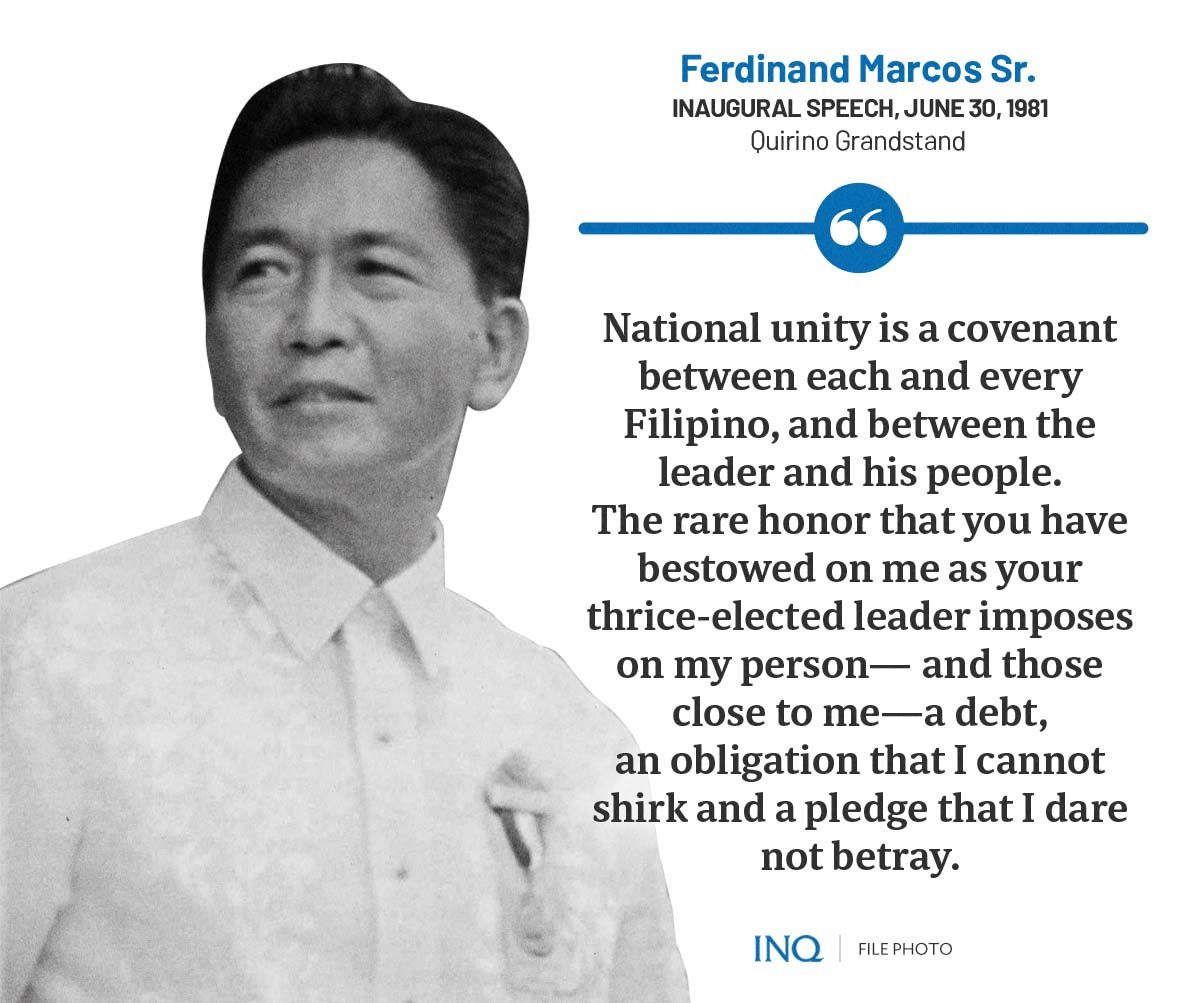 Many years ago, on June 30, 1981, the late Marcos also talked about unity during his inaugural address, which he said should be cultivated as a new national tradition.

“National unity is a covenant between each and every Filipino, and between the leader and his people. The rare honor that you have bestowed on me as your thrice-elected leader imposes on my person— and those close to me—a debt, an obligation that I cannot shirk, and a pledge that I dare not betray.”

“We must apply to the cultivation of a new national tradition of Filipino-unity, in which Christian and Muslim are brothers in blood and aspiration, in which religious freedom is not only a guarantee but also a true and enduring bond to hold all men together, none of them less than the others because of his religious creed or mode of worship.”

Without mentioning the previous administration led by former President Rodrigo Duterte, Marcos said there were “gains made and lost” and “opportunities missed.”

He also added that some previously “well-laid” plans were halted due to the COVID-19 pandemic.

“We shall be again, by radical change in the way the world must now work to recover what we lost in that fire, and move on from there,” he said.

Marcos likewise highlighted the shortcomings of his predecessor’s COVID response. He promised to fix these shortcomings and assured that his government will no longer have secrets in public health.

“There were shortcomings in the COVID response. We will fix them. Out in the open, no more secrets in public health. Remember, I speak from experience. I was among the first to get COVID. It was not a walk in the park,” the new president said.

“We won’t be caught unprepared, under-equipped, and understaffed to fight the next pandemic. To start with, we never got over the pandemic of poor, if any, free public health.”

Among these challenges include “building on the gains” of the Duterte administration in terms of its pandemic response. Another challenge is the country’s vaccine booster coverage, as the former health chief admitted that the country is still “struggling” with it.

“I will be the first one to admit that we’re struggling with the booster. But we have not given up, and the next administration will see the wisdom of what we have done in DOH, particularly in improving access to the booster dose for our people,” Duque said.

Further, Duque said the incoming government should also expand the country’s primary care services, which he described as “inadequate.”

Looking forward, Marcos assured the public that history will not be retaught in schools under his administration.

“What we teach in our schools, the materials used, must be retaught. I am not talking about history, I am talking about the basics, the sciences, sharpening theoretical aptitude and imparting vocational skills such as in the German example,” he said.

The new chief executive, who also said previously that he would take the role of the agriculture secretary, also discussed food self-sufficiency in his inaugural speech—which seems to be his administration’s priority.

“The trade policy of competitive advantage made the case that when it comes to food sufficiency a country should not produce, but import what other countries make more of and sell cheapest,” said Marcos.

“Food sufficiency must get the preferential treatment. The richest free trade countries always gave their agricultural sectors. Their policy boils down to don’t do as we do. Do what we tell you to,” he added.

“I am giving that policy the most serious thought if that doesn’t change or make more allowances for emergencies with long-term effects.”

Amid the disruptions in worldwide food prices due to Russia’s invasion of Ukraine, Marcos said there is a need for “radical changes”

One of Marcos’ promises was to bring down the price of rice to as low as P20 to P30 per kilo by recommending a price cap on the staple.

While some agricultural stakeholders claimed it was impossible to bring down the price of rice to P20 per kilo because the cost of producing, marketing, and shipping the staple alone has substantially increased, Agrarian Reform Secretary Bernie Cruz recently said it was possible for consumers to buy a kilo of rice at P20 as early as next year.

Although Marcos’ first speech as president was well-written, some critics could not help but notice some false claims that were mentioned throughout the entire inaugural address.

“The role of agriculture cries for urgent attention that its neglect and misdirection now demands. Food self-sufficiency has been the key promise of every administration. None but one delivered,” Marcos said.

READ: ‘None but one delivered,’ Marcos says on promised food self-sufficiency

Marcos’ father, during his term, introduced the Masagana 99 program, which was defined by author Emmanuel Esguerra in an article published in the Philippine Sociological Review in 1980 as “an annual crash program for palay production that aims to raise the yield per hectare of palay cropland from a national average of about 40 hectares to 99 cavans per hectare.”

Essentially, it was a credit program with the goal to boost rice production in the country. Unfortunately and eventually, Masagana 99 failed.

“Sadly, Masagana 99 proved to be short-lived and unsustainable mainly due to the costly subsidies and failure of many farmers-borrowers to repay the loans,” agronomist and former president of the University of the Philippines Dr. Emil Q. Javier wrote in a column in 2016.

The president has claimed anew that he was the one who built the windmills in his home province Ilocos Norte, but it has been fact-checked before, and was found that the windmills were actually built by private companies.

“Blades have been turning over the sand dunes of Ilocos Norte. Harnessing a power all around but unseen long before this day,” Marcos said, “I built them.”

The Bangui Bay Wind Power Project, the first wind farm in Bangui, was a project of NorthWind Power Development Corp. The private firm received funding from the World Bank.

READ: More wind farms to be developed in Ilocos Norte

What was left unsaid?

In a series of articles, the Philippine Center for Investigative Journalism (PCIJ) pointed out that Marcos has failed to address in his inaugural speech some of the key topics and issues gripping the country.

READ: Marcos Inauguration: What he said — and didn’t say — in first speech as president