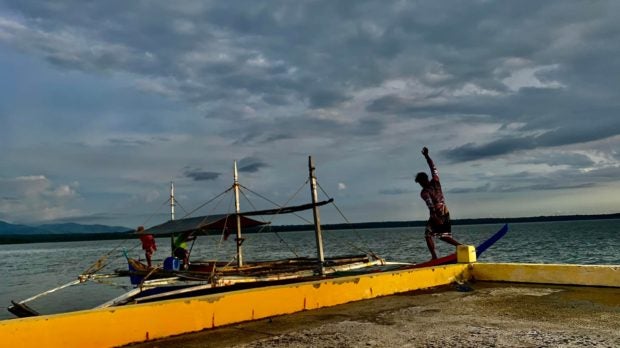 EARLY START Fishermen in Masinloc town, Zambales province, prepare their boat to get the best catch of the day in this photo taken on May 29. —JOANNA ROSE AGLIBOT

LUCENA CITY—Peasant groups welcomed the declaration of President Marcos to immediately address problems besetting the agriculture sector but fishers’ groups lamented that the new Chief Executive failed to mention their right to fish in the West Philippine Sea (WPS) in his inaugural speech.

“Hearing the highest elected public official of the land accept the reality that the sector has been neglected and misdirected is a good starting point,” Danny Carranza, secretary general of the national farmers’ group Kilusan Para sa Tunay na Repormang Agraryo at Katarungang Panlipunan, said in an interview on Friday.

He added: “For ordinary farmers, the end of neglect is the start of giving small farmers and the agriculture sector the needed attention and priority, while the end of misdirection means giving local food producers priority over an importation policy that results in losses of farmers.”

Carranza blamed the Duterte administration for most of the peasant woes, noting that liberalization of agricultural trade policies that allowed entry of foreign agricultural products into the country accelerated during the Duterte presidency.

He urged Mr. Marcos to immediately review the Rice Tariffication Law and aggressively implement the agrarian reform program to “liberate the farmers from the bondage of the soil” and to put a stop to the rampant conversion of agricultural lands into nonagricultural uses.

In his inaugural speech, Marcos noted that the country’s agriculture “cries for urgent attention that its neglect and misdirection now demands.”

“Food self-sufficiency has been the key promise of every administration. None but one delivered,” Marcos said, apparently referring to his late father, former President Ferdinand Marcos.

Carranza said the country’s farmers would wait and monitor the realization of Marcos’ goal, “especially in relation to the liberalization of agricultural trade.”

In Zambales province, fishermen criticized Mr. Marcos’ inaugural speech for not mentioning their right to fish at the WPS.According to Bobby Roldan, vice chair of Pambansang Lakas ng Kilusang Mamamalakaya ng Pilipinas (Pamalakaya) in Luzon, Mr. Marcos laid out some of the pressing issues besetting the country but failed to mention the real and present threat to national sovereignty.

“Even in passing, the foreign occupation in the WPS and its direct impact on the livelihood of Filipino fishers and domestic fishing production were not brought up in his 25-minute speech,” Roldan said in a statement.

Most of the fishermen in Zambales have temporarily stopped their fishing trips and sought other jobs that they perceived to be more sustainable than fishing as they could no longer afford the high fuel cost.

Among them were also the ones who remained reluctant to go back to the contested Scarborough Shoal, which served as their traditional fishing ground, due to some incidents of harassment they had experienced from the Chinese coast guard.

Roldan also said Marcos’ “obvious silence” on the issue “foreshadows a Duterte-brand of puppetry to China, which the Filipino fishers will certainly abhor.”

“We cannot afford another six years of defeatist collaboration by the administration with the Chinese government in the name of economic partnership, while the latter accelerates its control and foothold in the country,” Roldan added.