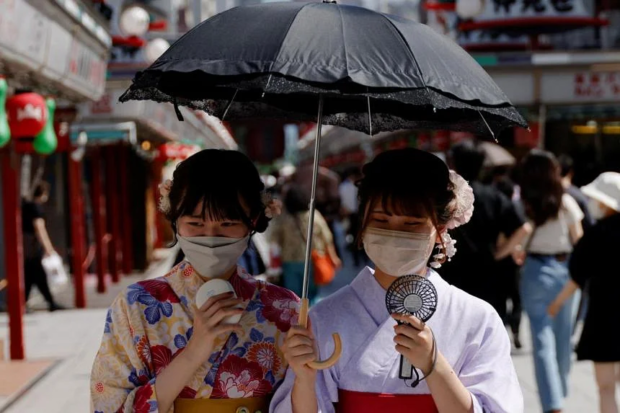 Tokyo is now battling its most severe heatwave for the month of June since records began in 1875. PHOTO: REUTERS

TOKYO — A smothering heatwave now blanketing Japan is not only causing a power crunch in the country but is also raising fears of a drought.

Wide areas in western Japan are now facing a crippling water shortage following the shortest rainy season on record, with water levels in dams less than half of what they would be in an average year.

Municipalities like the cities of Matsuyama and Shikokuchuo in Ehime prefecture have begun to call on residents to ration water.

Top government spokesman Hirokazu Matsuno told a regular news briefing on Tuesday that the government has a “strong sense of crisis” over the impact on water supply if the current heatwave were to continue.

The risk of a drought, however, remains low in eastern Japan as there was heavy rainfall in the mountainous areas north of Tokyo.

But eastern Japan is grappling with the spectre of a power crunch.

A “save electricity” advisory has been issued in the east for the fourth straight day on Thursday (June 30).

Tokyo managed to avoid blackouts this week only after residents and businesses responded to calls to curb power usage.

The capital is now battling its most severe heatwave for the month of June since records began in 1875, after the early end to the rainy season.

The mercury hit 35.4 deg C in central Tokyo on Wednesday, topping the 35 deg C mark for five days in a row, and is forecast to reach 36 deg C on Thursday.

A report by TBS News on Wednesday said that the power crunch will ease by the middle of next month, with the planned restart of 15 thermal power plants following scheduled repairs and checks this month.

Prime Minister Fumio Kishida, who is currently in Europe, on Tuesday called for the “maximum use” of nuclear power so long as safety can be assured, vowing to “work steadily to speed up reviews” to restart reactors that are offline.

Still, Japan is expected to get some respite from the summer heat next week due to a temporary rain front, the Japan Meteorological Agency said.

But it remains to be seen how far the rain front will go to ease the spectre of a drought in western Japan.

Due to the low rainfall and the shortest rainy season on record, the Sameura Dam in Kochi prefecture is now at 35 percent of its capacity when it would ordinarily be at 86 per cent at this time.

The Sajigawa Dam in Tottori prefecture is now at 15 percent of its capacity when it would usually be at 66 percent.

Sweet potato farmer Shigemitsu Fukui, 71, from the city of Naruto in Tokushima prefecture, told the Tokushima Shimbun newspaper: “Dry weather will affect the shape of the potatoes and stunt their growth. We have a limited range of sprinklers and if the water level of the dam is low, our water supply will also be affected.”

On Wednesday, 146 out of 914 weather stations throughout Japan set temperatures above 35 deg C.

The Fire and Disaster Management Agency said 4,551 people nationwide were sent to hospital for heatstroke in the week that ended on Sunday (June 26). Four died.

And in the capital on Tuesday, 224 people were sent to hospital in the highest single-day tally this year.

Mr Kishida said: “I don’t want people to take energy conservation too far. They should use air-conditioners wisely to get over this.”