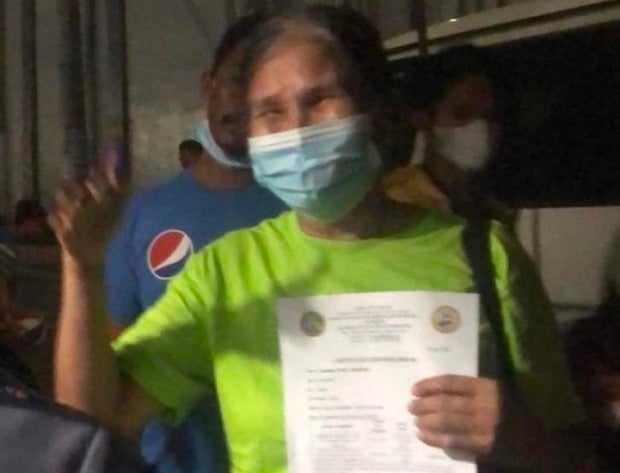 Lanzanas was among the six people arrested on March 7, 2021, in the so-called Bloody Sunday operation of the police and the army in the Calabarzon Region, which led to the deaths of nine activists.

In an 18-page ruling, Presiding Judge Caesar Buenagua of Calamba RTC Branch 37 granted the Lanzanas demurrer, effectively junking the case against her, and ordered her immediate release from detention.

A demurrer to evidence is a motion to dismiss anchored on the ground that the evidence presented is insufficient.

Lanzanas, through her lawyers from the National Union of Peoples’ Lawyers (NUPL), questioned the circumstances surrounding her arrest.

She said the place searched by the raiding team was not covered by the search warrant issued by Manila  Executive Judge Jason Zapanta.

She added that the raiding team also planted guns and explosives that were presented as seized during the operation.

In its ruling, the court said that the “police conducting the search failed to observe the strict procedures laid down by the rules in the implementation of the search warrant.”

Two places at the same time

The court explained that, under the Revised Rules on Criminal Procedure, “the service and implementation of search warrants does not give the authorities limitless discretion in implementing the same as the same Rules provides parameter in the proper conduct of a search.”

The court took note of the testimonies of the raiding team, two of whom were conducting simultaneous searches in the different portions of Lanzanas’ house. Both police officers maintained that they had complied with the rules and insisted that Lanzanas was with them during the search.

“The court finds it precarious to say that the accused was with both of them when they are conducting the search simultaneously,” the court.

The court also noted that the police failed to ask Lanzanas to designate her representative for the simultaneous search — a violation of the rules.

No witnesses during warrant application

Lanzanas’ lawyers, led by Josa Deinla, alleged that there was a “deliberate falsehood” made during the application of the search warrant.

The court said it expected the prosecution to present a witness to rebut the allegation, but no witness or evidence was presented to contradict the allegation.

“The unavailability and or the apparent reluctance of these witnesses to appear and testify damages the case sufficient to create reasonable doubt for the acquittal of the accused,” the court said.

“Consequently, these irregularities attending implementation tainted the search of the house of accused with the vice unreasonableness, thereby constraining this court to apply the exclusionary rule and declare the inadmissibility in evidence of the seized items,” the court said.

The court said the exclusion of the seized items as evidence was the “only practical means of enforcing the constitutional injunction against unreasonable searches and seizures.”

“Verily, they are the ‘fruits of the poisonous tree.’ Without this exclusionary rule, the constitutional right would be so ephemeral and so neatly severed from its conceptual nexus with the freedom from all brutish means of coercing evidence,” the court explained.

In a statement, the NUPL said “the legal triumph inspires us to stand our ground, push back and fight amid all the injustice and unrest.”

“We likewise call for the immediate release of our other detained human rights workers Alexander Philip Abinguna, Renalyn Tejero, Glendhyl Malabanan, and Alex Pacalda — who experience the same kind of injustice inflicted on Nay Nimfa and have remained courageous despite threats and imprisonment,” Cristina Palabay, Karapatan secretary-seneral, said.

“We demand the release of all 802 political prisoners, 592 of them arrested under Duterte. We demand the end to the attacks including judicial harassment against our human rights workers in the government’s failed attempts to stop us from doing our work and advocacy and to suppress political dissent,” she added.