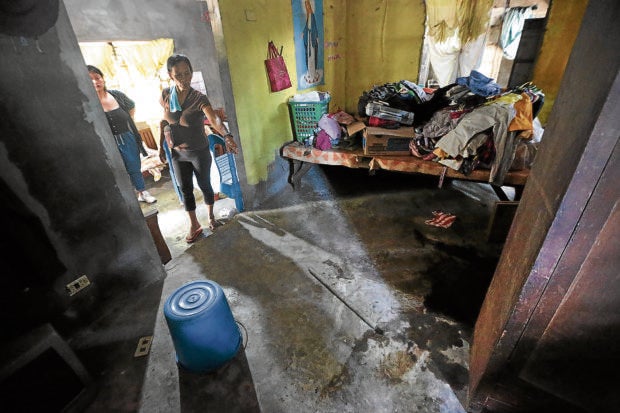 BLOODY RAID Imelda Evangelista, 55, on Wednesday points to the spot where her son, Ariel Evangelista, and his wife, Chai Lemita-Evangelista, were shot dead by police officers in Barangay Calayo, Nasugbu, Batangas. The Evangelista couple was among the nine activists killed in simultaneous police-military raids in the Southern Luzon region on Sunday. —GRIG C. MONTEGRANDE

MANILA, Philippines — The Office of the United Nations High Commissioner for Human Rights (OHCHR) has expressed shock and horror at the recent killings of activists in Southern Luzon and an international human rights watchdog on Wednesday urged the UN body to immediately send a “rapid response unit” to investigate their deaths at the hands of security forces.

“We are appalled by the apparently arbitrary killing of nine activists in simultaneous police-military operations in Batangas, Cavite, Laguna and Rizal provinces surrounding Metro Manila in the Philippines in the early hours of Sunday morning,” OHCHR spokesperson Ravina Shamdasani said in a statement on Tuesday.

“We are deeply worried that these latest killings indicate an escalation in violence, intimidation, harassment and ‘Red-tagging’ of human rights defenders,” she said.

“Red-tagging” is the labeling of opponents as communists or terrorists to justify targeting them.

The government’s commitment to investigate these cases, Shamdasani said, will be a “critical test” for the domestic mechanisms that the Duterte administration said it had established for such cases.

Shamdasani said an investigation must be “conducted with a view to accountability.”

“The fact remains that most of the perpetrators of these human rights violations are enjoying impunity to this day,” she said.

The New York-based Human Rights Watch (HRW) on Wednesday said the killings show the need for an independent and international inquiry into rights violations in the country.

He said concerned governments should support “international action” to hold the Duterte administration to account for “grave human rights violations.”

HRW said the UN human rights office was mandated to deploy a rapid response unit to respond to humanitarian and human rights crises around the world.

According to the OHCHR, a rapid response unit provides support to UN Human Rights field offices, which conduct fact-finding missions and inquiries into allegations of human rights abuses.

In recent times, the unit has coordinated missions in Myanmar, Congo and South Sudan, where human rights abuses had been reported.

Presidential spokesperson Harry Roque declined to comment on the OHCHR statement, saying only that an “investigation is ongoing.”

Justice Secretary Menardo Guevarra said the OHCHR and other groups should have “sufficient information before making a judgment.” 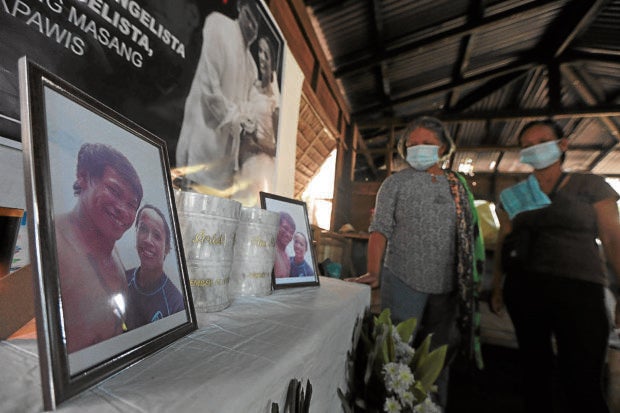 GRIEVING MOTHERS Rosenda Lemita (left)and Imelda Evangelista, mothers of spouses Ariel Evangelista and Chai Lemita-Evangelista, watch over their cremated remains on Wednesday, three days after police shot them during a raid on their house in Barangay Calayo, Nasugbu, Batangas. Evangelista and his wife were leaders of a fishermen’s group and were among nine activists killed during separate raids in Southern Luzon on
Sunday. —GRIG C. MONTEGRANDE

“We understand the concern of the UN-OHCHR. That is why the DOJ (Department of Justice) has ordered a thorough investigation of the incidents,” Guevarra told the Inquirer on Wednesday.

The Philippine Mission to the UN in Geneva, however, scored the UN human rights body, saying it was uninformed.

“We are appalled at OHCHR prejudging legitimate police operations on Sunday in the Philippines vs persons possessing dangerous firearms and explosive devices. We regret this overreach of OHCHR’s mandate—clearly uninformed of facts on the ground,” it said in a Twitter post on Tuesday.

It said it would ask the OHCHR to correct “hasty opinions favoring violators of the law & instead support efforts to uphold law & order.”

The Commission on Human Rights (CHR) on Wednesday called for greater transparency from government investigations of such killings.

CHR Commissioner Gwen Pimentel Gana said access to police records remained a “recurring obstacle” in the commission’s investigations, making it difficult to ascertain the veracity of police claims and the extent of the effort extended in investigating deaths.

“Findings from different cases being covered by CHR regional offices point to a more pressing conclusion—that access to justice remains to be a challenge as truth remains elusive,” she said.

Rights groups have accused President Rodrigo Duterte of encouraging a crackdown on activists to silence dissent and target his detractors, under the guise of intensified counterinsurgency operations against communist rebels.

They said the weekend raids were reminiscent of thousands of deadly police operations under the bloody antidrug crackdown, in which police said all of the victims were armed and had resisted arrest.

Albay Rep. Edcel Lagman on Wednesday criticized the President’s “apologists” for “vainly justifying his perilous statement” of ordering the killing of communist rebels.

“Mr. Duterte’s deadly order resulted in the separate but simultaneous extrajudicial killing of nine crusading activists in Calabarzon who were not even combatants,” Lagman said in a statement.

He was reacting particularly to Sen. Ronald dela Rosa’s defense of the President’s remarks as mere “hyperbole.”

“There is no place for disastrous ‘hyperbole’ when the people’s human rights and civil liberties are at stake,” Lagman said. “Until now, Duterte has neither recanted nor tempered his lethal instruction which may escalate nationwide.”

Bayan Muna Rep. Ferdinand Gaite said the authorities’ claims that the slain activists tried to fight back and resist arrest were “fraught with doubt.”

“We are still in shock and are enraged by the Bloody Sunday in Southern Tagalog. We condemn these heartless summary executions masquerading as legitimate police operations. It is very clear that it was a bloody crackdown against progressives,” Gaite said.