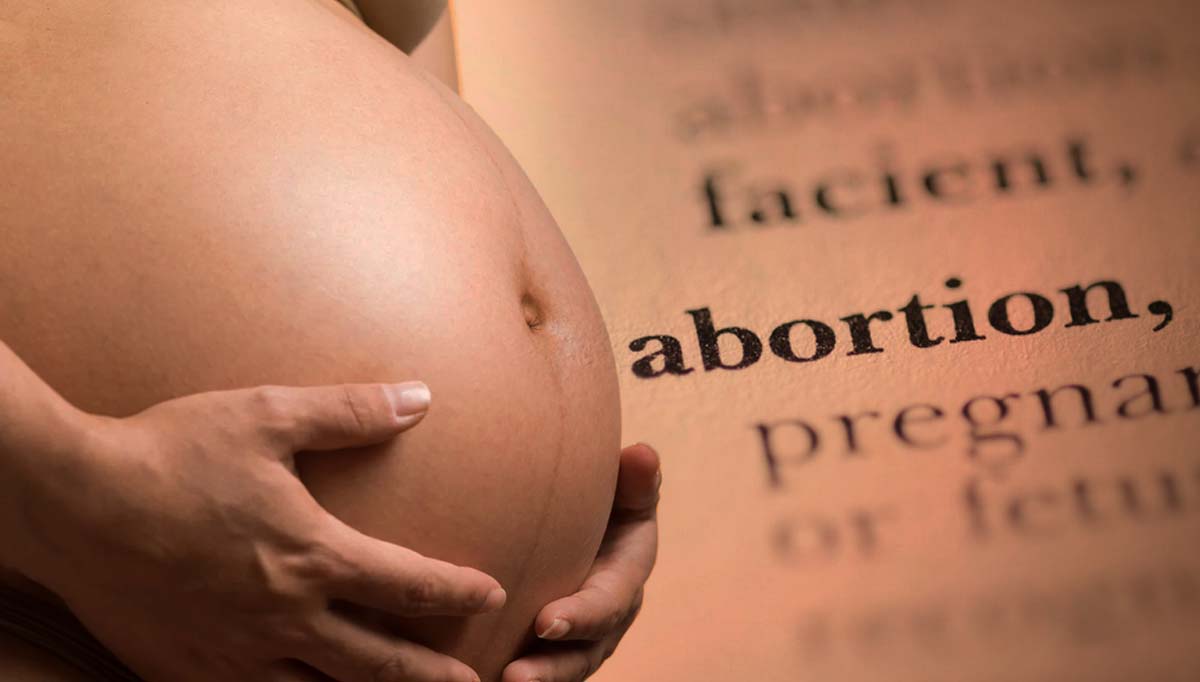 MANILA, Philippines—Last week, in a historic decision, the US Supreme Court shocked the world as it officially overturned the landmark 1973 Roe v. Wade ruling recognizing women’s constitutional right to abortion.

The 1973 ruling in the landmark Supreme Court case known as Roe v. Wide guarantees a woman’s right to an abortion in the United States in the absence of any federal laws on the procedure.

In the case known as Planned Parenthood v. Casey, the 1992 court decision protects access to abortion until “viability”—a period when the fetus can survive outside the womb—typically between 22 and 24 weeks of pregnancy.

READ: Abortion: how things stand in US as court prepares to rule

On June 24, however, it was clear that millions of women in the US would soon lose their constitutional right to abortion following the Supreme Court’s decision to reverse the 50-year-old Roe v. Wade decision.

While the Vatican praised the ruling, it sent a chilling message to other nations—with Britain, France, and some other countries describing the ruling as a step backward—as it challenged the world to reflect on life issues.

In the Philippines, where abortions remain illegal, many non-government organizations and advocates have expressed their disappointment in the ruling—as well as their support and solidarity with fellow advocates in the US who are still pushing for the right to abort, despite the recent ruling.

In this article, following the latest developments on abortion laws in the US, INQUIRER.net will dive deep into abortion and the topics and issues surrounding it—including abortion provisions and unsafe abortion data across the globe and in the Philippines.

What you should know about abortion

Abortion is a common health procedure that ends a pregnancy.

“Abortion is a simple health care intervention that can be effectively managed by a wide range of health workers using medication or a surgical procedure,” said the World Health Organization (WHO).

Each year, around 73 million induced abortions take place across the globe. It is estimated that one in four pregnancies end in abortion every year.

Meanwhile, WHO said six out of 10 unintended pregnancies worldwide end in induced abortion.

According to Amnesty International, abortion is considered a basic health care need for millions of women and girls who become pregnant.

Abortion, based on data provided by the Center for Reproductive Rights, is still prohibited and considered in many countries.

According to the Center for Reproductive Rights, abortion laws in countries across the globe can be classified into five categories. These were:

Laws of countries under this category do not allow abortion under any circumstances—even when the woman’s life or health is at risk.

The organization said at least 24 countries globally fall within this category, including the Philippines.

Around 90 million—five percent—of women of reproductive age live in these countries that prohibit abortion altogether.

According to the Center for Reproductive Rights, laws in countries under this category permit abortion only when the woman’s life and health are at risk.

The organization said at least 42 countries fall within this category.

Around 360 million—22 percent—women of reproductive age live in those countries that allow abortion to save the woman’s life.

In countries under this category, laws state that abortion is permitted based on health or therapeutic grounds.

The Center for Reproductive Rights, citing WHO, noted that countries that permit abortion on health grounds “should interpret ‘health’ to mean “a state of complete physical, mental, and social well-being and not merely the absence of disease or infirmity.”

There are 51 countries that fall under this category.

There are currently 225 million—14 percent—women of reproductive age who live in these countries where abortion is allowed on health grounds.

Laws in the 13 countries under this category are “generally interpreted liberally to permit abortion under a broad range of circumstances.”

“These countries often take into account a woman’s actual or reasonably foreseeable environment and her social or economic circumstances in considering the potential impact of pregnancy and childbearing,” the organization explained.

There are 386 million—23 percent—women of reproductive age live in these countries.

There are 601 million—36 percent—women of reproductive age who live in the 72 countries that fall within this category, where abortion is permitted on request.

“The most common gestational limit for countries in this category is 12 weeks. Gestational limits are calculated from the first day of the last menstrual period, which is considered to occur two weeks prior to conception,” the Center for Reproductive Rights said.

Certain laws specify that gestational age limits are calculated from the date of conception. In these cases, limits have been extended by two weeks.

“The right to safe and legal abortion is a fundamental human right protected under numerous international and regional human rights treaties and national-level constitutions around the world,” said the organization.

“These instruments ground safe abortion in a constellation of rights, including the rights to life; liberty; privacy; equality and non-discrimination and freedom from cruel, inhuman and degrading treatment,” it added.

Moreover, the Center for Reproductive Rights explained that the legal status of abortion signifies more than just pinpointing where women and girls are legally allowed to decide whether or not they will undergo an abortion.

“It also reveals how likely a woman is to die from unsafe abortion, whether girls will complete their education, and the limits on women and girls’ ability to participate in public and political life,” the organization explained.

“In short, tracking the legal status of abortion shows us where women and girls are treated with equality and are afforded the opportunity to direct the course of their own lives.”

In the Philippines, where most of its population is Catholic, abortion is still not permitted, illegal, and punishable under the law.

The Philippine Safe Abortion Advocacy Network (PINSAN) described the country’s laws on abortion as restrictive and based on “outdated legislation.” 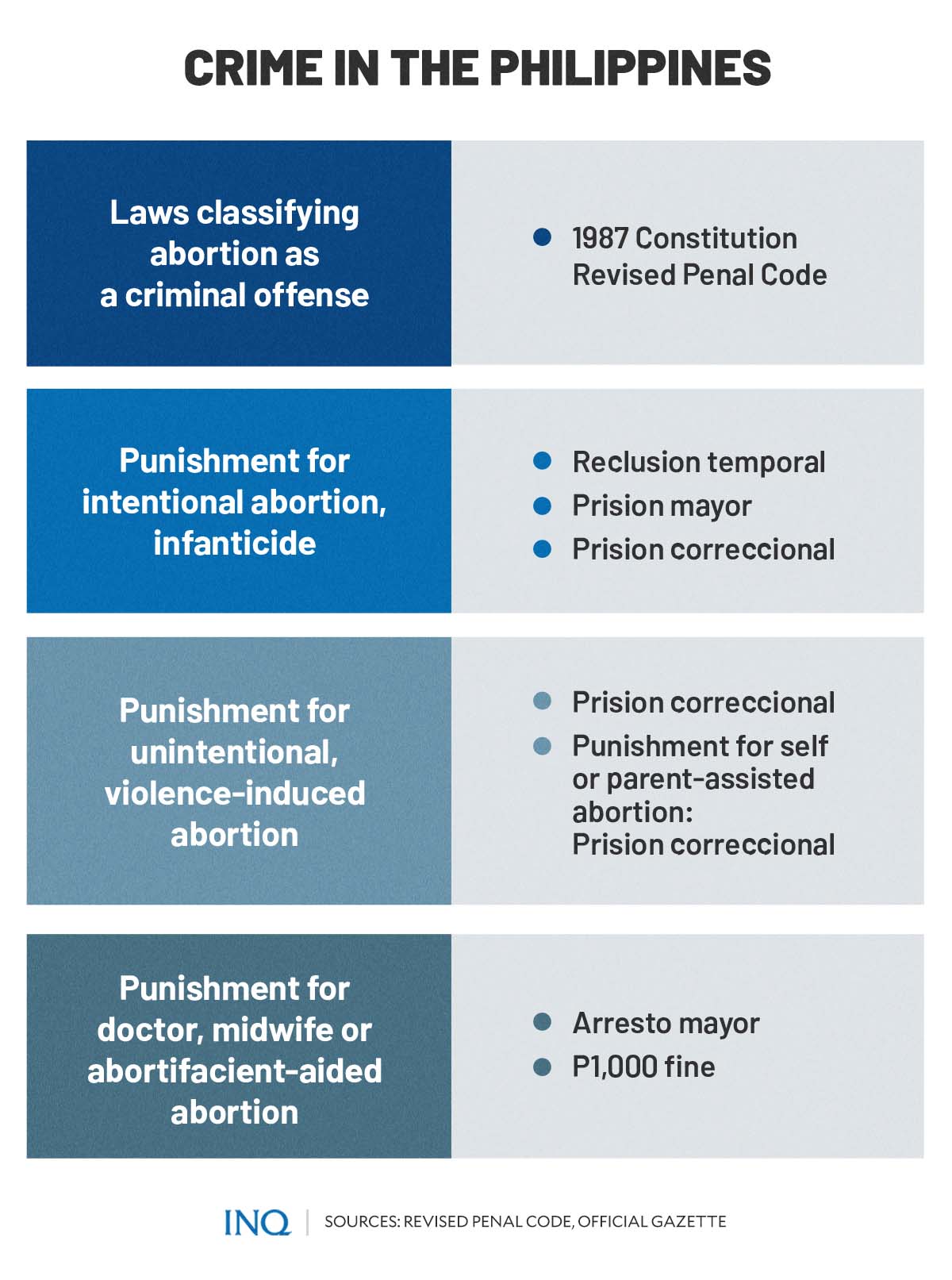 The country’s current provisions on abortion are based on two legislations: Article II, Section 12 of the 1987 Constitution, and Articles 256-259 of the Revised Penal Code of the Philippines.

“SECTION 12. The State recognizes the sanctity of family life and shall protect and strengthen the family as a basic autonomous social institution. It shall equally protect the life of the mother and the life of the unborn from conception. The natural and primary right and duty of parents in the rearing of the youth for civic efficiency and the development of moral character shall receive the support of the Government.”

“ARTICLE 256:  Intentional Abortion. — Any person who shall intentionally cause an abortion shall suffer:

ARTICLE 257. Unintentional Abortion. — The penalty of prisión correccional in its minimum and medium period shall be imposed upon any person who shall cause an abortion by violence, but unintentionally.

ARTICLE 258. Abortion Practiced by the Woman Herself or by Her Parents. — The penalty of prisión correccional in its medium and maximum periods shall be imposed upon a woman who shall practice abortion upon herself or shall consent that any other person should do so.

Any woman who shall commit this offense to conceal her dishonor, shall suffer the penalty of prisión correccional in its minimum and medium periods.

Suppose this crime was committed by the parents of the pregnant woman or either of them, and they act with the consent of the woman for the purpose of concealing her dishonor. In that case, the offenders shall suffer the penalty of prisión correccional in its medium and maximum periods.

ARTICLE 259. Abortion Practiced by a Physician or Midwife and Dispensing of Abortives. — The penalties provided in article 256 shall be imposed in its maximum period, respectively, upon any physician or midwife who, taking advantage of their scientific knowledge or skill, shall cause an abortion or assist in causing the same.

Any pharmacist who, without the proper prescription from a physician, shall dispense any abortive shall suffer arresto mayor and a fine not exceeding 1,000 pesos.

“For over a century, abortion has been criminalized in the Philippines. The criminal provisions on abortion do not contain any exceptions allowing abortion, including to save the life of the pregnant woman or protect her health,” said the Center for Reproductive Rights.

In 2017, lawyer Clara Rita Padilla, EnGendeRights executive director, said that therapeutic abortion based on saving a woman’s life is allowed in the country.

“In Philippine jurisprudence, it is recognized that therapeutic abortion is allowed to save the life of the woman,” Padilla said in a statement in response to the anti-abortion posture of President Rodrigo Duterte in his State of the Nation Address (SONA) that same year. 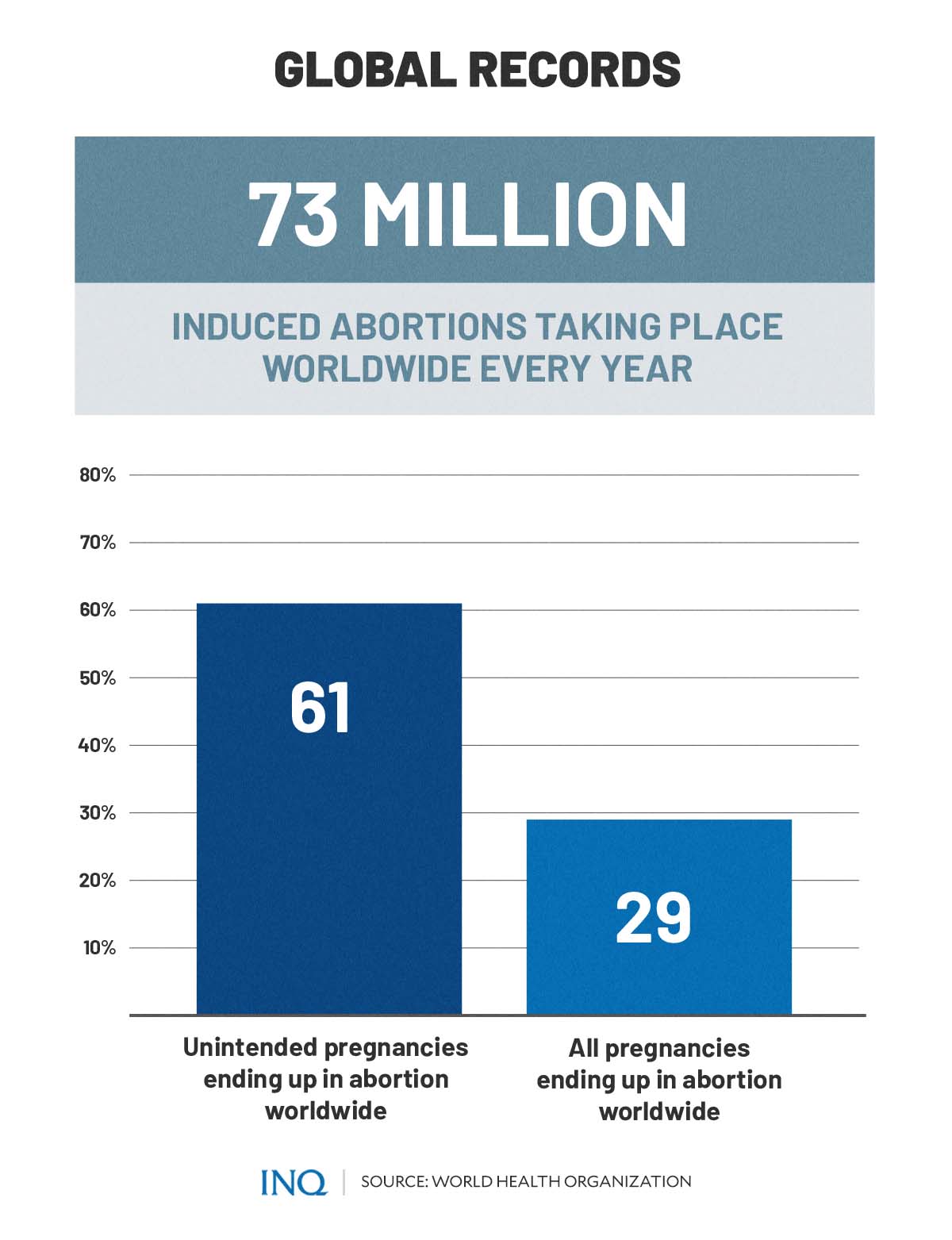 “In law, practice and policy, therapeutic abortions are allowed.”

Therapeutic abortion is allowed in some countries in cases when:

Still, abortion is considered a crime in the Philippines.

Penalizing abortion, however, has not stopped women across the globe from inducing an abortion—nor has it ever lowered the number of women inducing abortion. 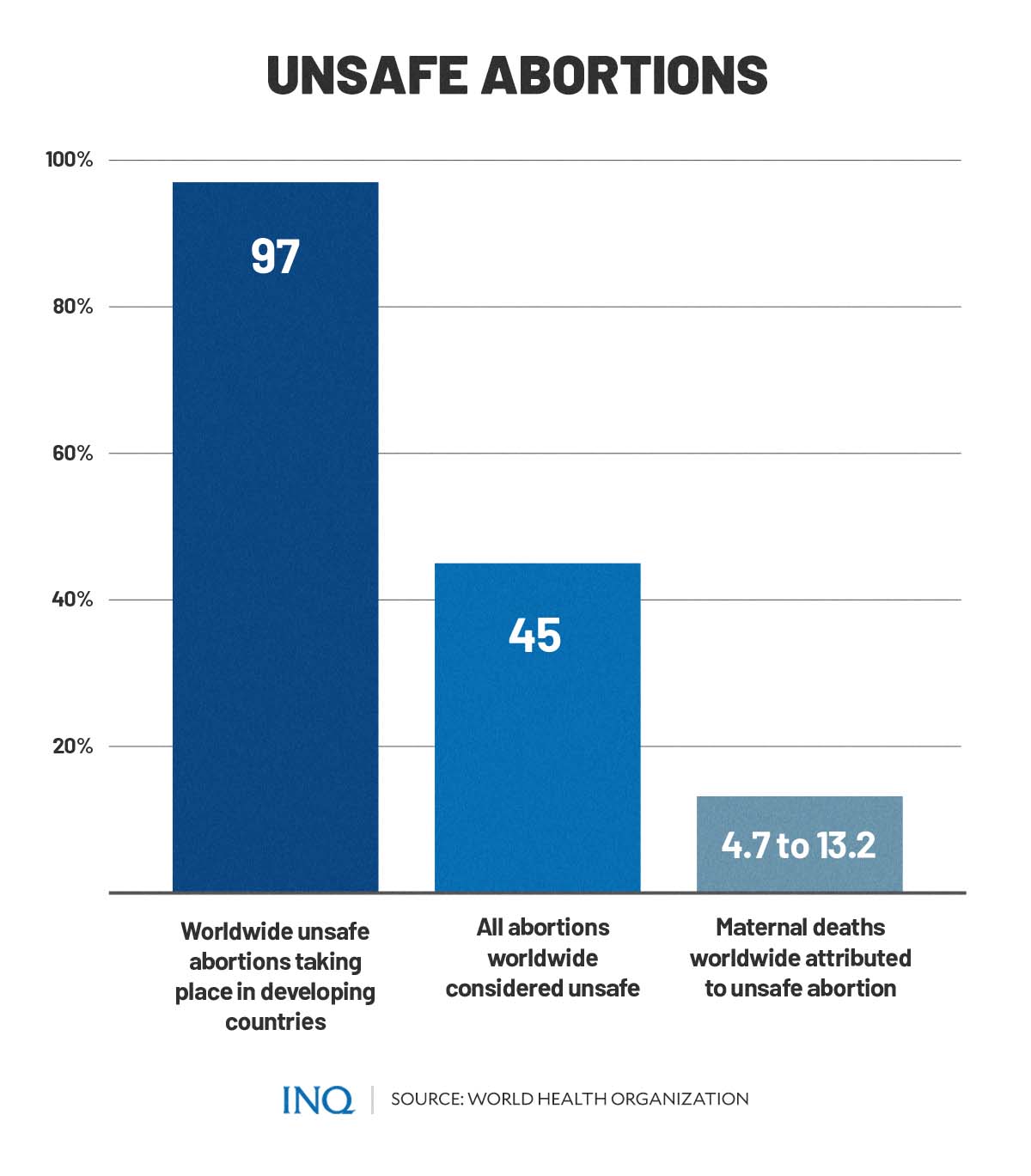 Restrictive laws on abortion, according to advocacy groups, have only forced women to seek unsafe abortions instead.

Based on UNFPA’s 2022 State of the World Population report, nearly half of all pregnancies worldwide are unintended, and over 60 percent of these unintended pregnancies may end in abortion.

“A staggering 45 percent of all abortions around the world are unsafe, making this a leading cause of maternal death,” said UNFPA.

Unsafe abortion, according to WHO, is a leading—but preventable—cause of maternal deaths and morbidities worldwide. 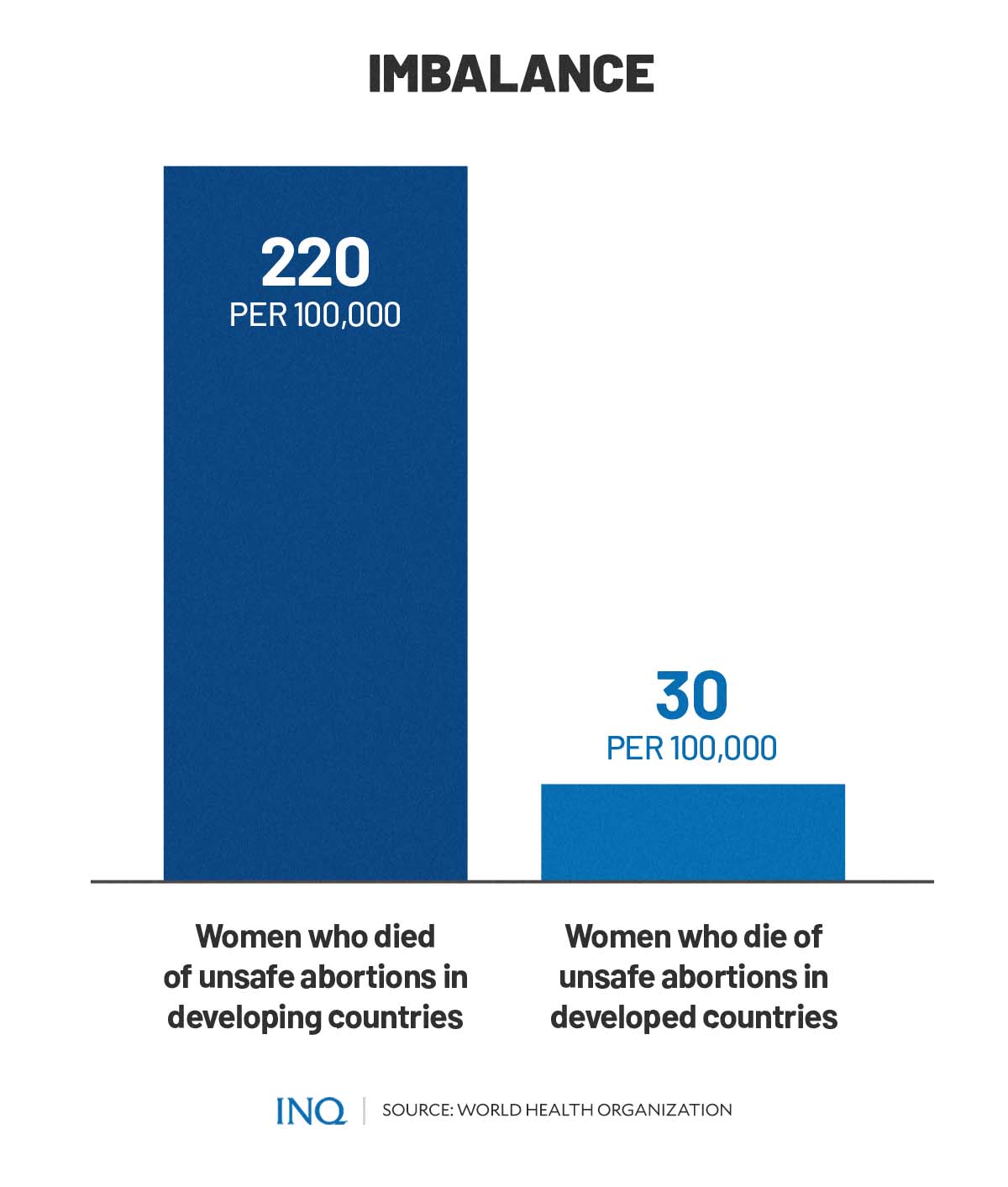 “Lack of access to safe, timely, affordable, and respectful abortion care is a critical public health and human rights issue,” said WHO.

WHO data showed that:

Aside from maternal death, complications due to unsafe abortion cause physical and mental health complications and social and financial burdens for women, communities, and health systems.

Among the physical health risks associated with unsafe abortion are:

“Almost all unsafe abortions currently occur in developing countries, and UNFPA fears that more unsafe abortions will occur around the world if access to abortion becomes more restricted,” said UNFPA.

“Decisions reversing progress gained have a wider impact on the rights and choices of women and adolescents everywhere.”

In the Philippines, there were 610,000 induced abortions recorded in 2012 despite the country’s strict laws on the said medical procedure.

Over 100,000 of those Filipino women who induced abortion that same year were hospitalized, according to a study by the Guttmacher Institute—a research group that supports access to abortion.

Unfortunately, 1,000 of those women died due to unsafe abortion complications.

According to PINSAN, 2012 statistics show that lack of access to safe and legal abortion has a grave public health impact on women’s lives and health translating to:

The figures have also been continuously increasing throughout the years, “proportionately with the increasing Philippine population.”

The increase continued through 2020 when it was estimated to reach over 1.26 million.

“The country’s restrictive laws on abortion have not prevented abortion and have only made it extremely unsafe, leading directly to the preventable deaths of thousands of women each year,” said PINSAN.