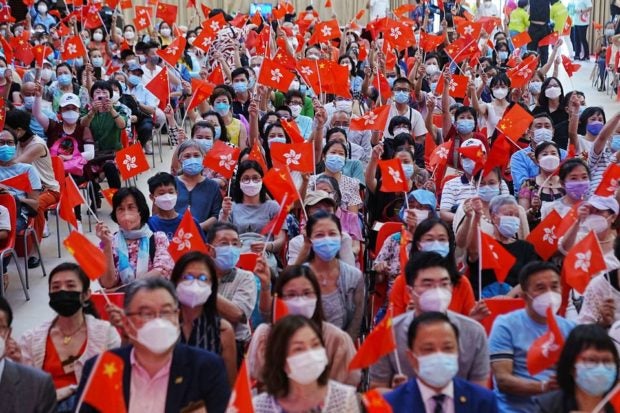 People wave Chinese and Hong Kong flags during a celebration event for the 25th anniversary of Hong Kong’s handover to China from Britain, in Hong Kong, China June 26, 2022. REUTERS

HONG KONG — Journalists from more than seven organizations, including Reuters, have been blocked from covering official ceremonies to mark the 25th anniversary of Hong Kong’s handover from British to Chinese rule that President Xi Jinping is due to attend.

A spokesperson for the Hong Kong government said the government was “striking a balance as far as possible” between the need for media coverage and security requirements.

“We will not comment on the accreditation outcome of individual organizations and persons,” the spokesperson said, without elaborating.

The Hong Kong Journalists Association said late on Tuesday that at least 10 journalists from seven or more local and overseas media were barred from ceremonies on Friday. The organisation named Hong Kong-based South China Morning Post, Hong Kong 01, Now TV and Ming Pao, and Agence France-Presse as among those barred.

Six sources with direct knowledge of the matter have told Reuters that journalists with Bloomberg, public broadcaster RTHK, and state-backed Ta Kung Pao were also rejected. The South China Morning Post reported that a photographer from the government’s Information Services Department (ISD) was among those rejected.

None of the eight media outlets responded to a Reuters request for comment. Reuters could not immediately confirm which media have been approved to cover the ceremonies.

A Reuters spokeswoman confirmed that two of the news agency’s journalists had been barred from covering the handover ceremony and inauguration of John Lee, saying Reuters was seeking further information on the matter.

Initially, the ISD invited media organisations to submit up to 20 applications each. Reuters applied for six journalists to cover handover anniversary events on Friday. The ISD informed Reuters on Saturday that only one person each for two events could be accepted.

The blocking of journalists comes as police in the global financial hub mount an extensive security operation for Xi’s visit – his first known trip outside mainland China in over two years amid the COVID-19 epidemic.

Beijing imposed a sweeping national security law on the city in the wake of often violent anti-government protests in 2019, sparking international criticism that the freedoms promised the city at the handover are disappearing.

Chinese and Hong Kong officials have said the new law was vital to ensure stability and that individual rights and freedoms, including media freedom, remain intact.