Hong Kong: A turbulent road from the handover | Inquirer News 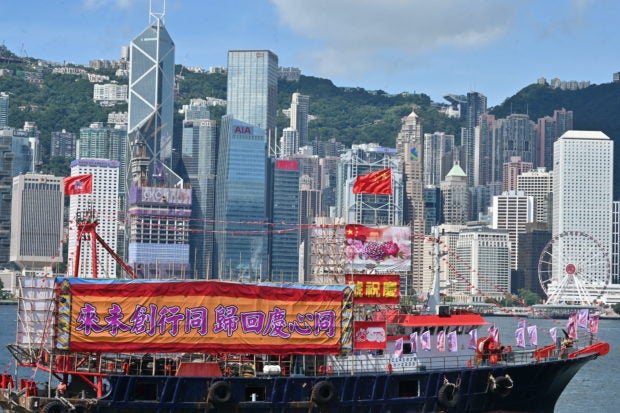 A fishing boat with banners and flags to mark the 25th anniversary of the handover of Hong Kong from Britain to China sails through Hong Kongs Victoria harbour on June 28, 2022. AFP

HONG KONG—Hong Kong has had a turbulent history since it was handed over from Britain to China 25 years ago.

Here are some key dates.

On June 30, 1997, at midnight, Hong Kong is returned to Chinese sovereignty after 156 years of British rule.

The tiny territory has its own mini-constitution that governs its autonomy as a Special Administrative Region within China. Beijing promises a “One Country, Two Systems” approach to the territory, meaning it will maintain freedoms that are not available to mainland Chinese.

The city is governed by a chief executive, chosen by a Beijing-controlled committee. Laws are passed by a legislative council, of which only a minority of members is democratically elected.

In October 1997, just months after the handover, the Asian financial crisis grips Hong Kong, plunging the financial hub into an economic slowdown.

Travel restrictions on Chinese from the mainland are eased, boosting the number of tourists.

In July 2003, an unprecedented half a million of Hong Kong’s population of seven million march against an unpopular national security bill, which they see as an attempt by Beijing to restrict their freedoms.

The bill is subsequently dropped, a rare government climbdown.

In January 2004, 100,000 people march through the city calling for more democracy, bringing to a head a simmering row over the constitution’s diffidence on electoral reform. China in April rules out a swift change.

In July, hundreds of thousands of protesters again come out to demand more democracy.

In 2007, Beijing schedules for 2017 the first democratic election of the chief executive, and for 2020 elections to the legislative council. The promises disappoint pro-democracy demonstrators who were demanding universal suffrage from 2012.

In 2014, Beijing proposes a limited version of universal suffrage — Hong Kongers will be able to choose from a small group of Beijing-vetted candidates.

The announcement sparks a 79-day occupation of major thoroughfares known as the “Umbrella Movement”. The protesters secure no concessions from Beijing, an outcome that prompts a minority of protesters in subsequent years to harden their positions, including advocating Hong Kong independence.

In 2019, the Hong Kong government tries to fast-track a bill through the legislature that would allow extraditions to China’s Communist Party-controlled courts.

The move sparks the biggest protests Hong Kong has witnessed since the handover.

Millions take to the streets during seven months of unrest while a smaller section of hardcore protesters frequently battle police in often-violent confrontations that see thousands arrested.

The movement soon morphs into a new call for democracy and police accountability but is eventually suppressed.

In January 2020, Hong Kong is one of the first territories to be affected by the coronavirus epidemic.

The executive takes drastic measures, including a ban on public gatherings, effectively ending the pro-democracy demonstrations.

China’s security agencies will be able to operate publicly in the city for the first time.

And Beijing will have jurisdiction over some cases, toppling the legal firewall that has existed between Hong Kong and mainland courts.

Calls for independence or for greater autonomy are banned.

Since then most of the pro-democracy leaders have been jailed, given up politics or fled abroad.

Many Western powers say the law has ended the principle of “One Country, Two Systems” approach, which was supposed to be in place until 2047.

In March 2021, China approves a radical “patriots only” reform of the electoral system which completely sidelines the opposition.

In May 2022, Hong Kong’s former security chief John Lee, who oversaw the clamp down on the pro-democracy movement, is nominated to govern the city in a selection process where he faced no rivals.