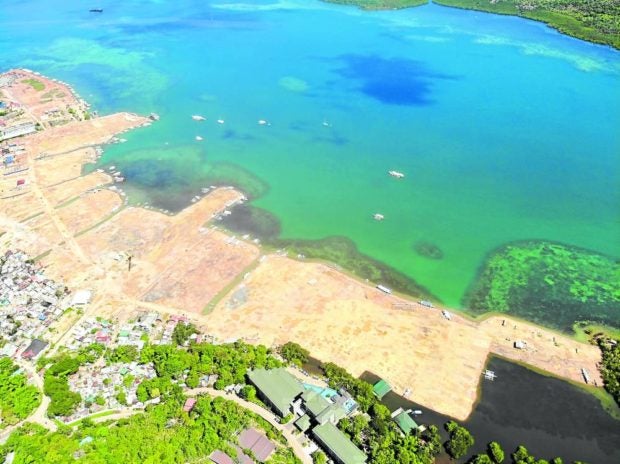 DRY LAND | The reclamation of a 22-hectare area at the town center of Coron, Palawan, has been stopped after the provincial government and its joint venture partners failed to secure an area clearance. The reclaimed area has been forfeited in favor of the national government. (Contributed photo by RANDOLPH ABOROT / Sagip Coron Palawan)

PUERTO PRINCESA CITY, Palawan, Philippines — After years of battling against a “destructive development project,” a civic movement in Coron, Palawan, scored a win when the Philippine Reclamation Authority (PRA) ordered the forfeiture in favor of the national government of an unfinished reclamation project in the town.

Lawyer Mark Arthur Catabona, acting board secretary of the PRA, in Resolution No. 5541-2022 issued on June 16, ordered the forfeiture of about 22 hectares of reclaimed land in Coron, citing the unauthorized reclamation undertaken by the Palawan provincial government and its joint venture partners.

The decision came after the PRA found out that the project continued without area clearance from the Department of Environment and Natural Resources (DENR), as directed by President Duterte on March 22, after a meeting with Sagip Coron Palawan (SCP) conveners.

“In view of the total forfeiture of the said reclaimed land, the PRA management is also hereby granted with authority to apply and comply with the DENR requirements for presidential proclamation declaring the land alienable and disposable and no longer needed for public use, issuance of a special patent, and eventual titling thereof,” the PRA resolution said.

PRA General Manager and CEO Janilo Rubiato said the Coron case could be the first total forfeiture granted by the agency in favor of the national government, meaning forfeiture orders previously issued in other reclamation sites had partial coverage that allowed proponents to use certain parts of the reclaimed area.

Bob Magallanes, one of the conveners of Sagip Coron and a native of the island town, welcomed the development after years of “fighting the good fight,” which, he said, would not have been possible without the persistent call to action from locals.

“I am thankful to Sagip Coron members who showed concern for the nation and future generations and to all residents of Coron who sacrificed their time and effort for this cause,” Magallanes said in a message to the Inquirer on Tuesday.

Marion Raagas, also among Sagip Coron’s conveners, said the forfeiture of the illegally reclaimed land was a “big victory for mother nature and the Coron people.”

Raagas said the PRA; the tourism, public works, interior and local government, and environment departments; the Armed Forces of the Philippines; and all allied government agencies and the community would work together and come up with a comprehensive master plan for Coron.

“We are also hoping that the incoming administration will be supportive [of] our efforts, hopes and dreams for ordinary people who are affected by illegal reclamation and quarrying that they may review the ‘Executive Order Coron,’ which SCP’s legal counsel drafted, so we can execute the whole-of-nation approach [and the] much needed reforms for both our country’s development and responsible reclamation and quarrying will be followed and enforced to the letter,” Raagas said. 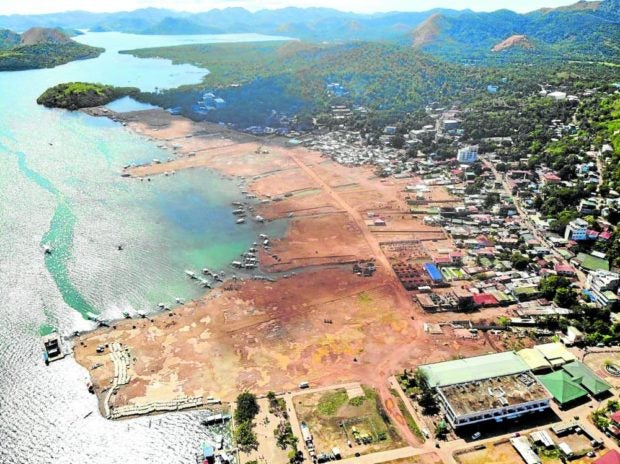 REHAB UNDER WAY | Members of the civic movement Sagip Coron Palawan vow to rehabilitate the illegally reclaimed land in the tourist town, saying they will protect it from moves that may hurt the local environment. (Contributed photo by RANDOLPH ABOROT / Sagip Coron Palawan)

Incumbent provincial government officials had yet to issue a statement on Tuesday but had initially distanced themselves from the controversy, citing that the project was continued from a previous plan under the administration of former Gov. Joel Reyes 15 years ago.

The Coron Bay Development Project was started in 2007 by Reyes, who applied for the environmental compliance certificate (ECC) with the DENR for a 3-ha area. In 2009, it got another ECC for 48 ha.

Between 2012 and 2018, the project was halted reportedly due to lack of funds but was reinstated by outgoing Gov. Jose Alvarez, who entered into a joint venture with developers for the construction of hotels, docking stations, and other tourism-related facilities at Coron town center.

Alvarez won as representative of Palawan’s second congressional district during the May 9 elections. His vice governor, Dennis Socrates, will succeed him as governor of the province.