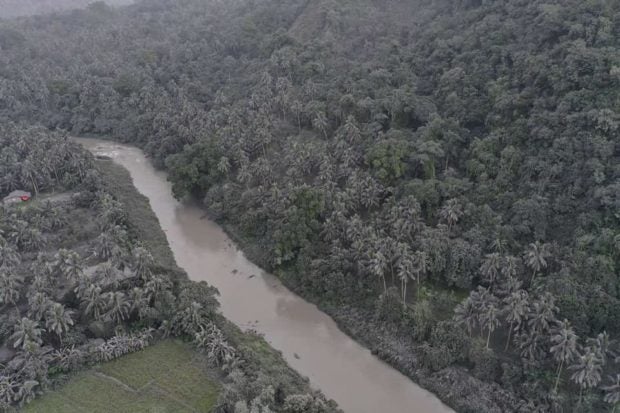 A thick layer of ash caused by the phreatic eruption of Mount Bulusan blanketed the villages of Bacolod and Buraburan in Juban town in Sorsogon on Sunday, June 5, 2022. (Photo from the Sorsogon Provincial Information Office)

The provincial government earlier confirmed that the rain-triggered lahar flow was observed in the villages of Rangas, Añog and Calatagan in Juban town and along the Cadac-an River in Irosin town.

Leo Tabing, municipal agriculturist of Juban, said they warned fishermen and farmers near the streams and rivers of the possible threat of lahar.

In the June 5 eruption of the volcano, about P100,000 worth of tilapia was lost to a fish kill in a fishpond in Juban due to ashfall.

Nonie Enolva, the Bureau of Fisheries and Aquatic Resources Bicol spokesperson, said the lahar flow could trigger another fish kill as volcanic debris in rivers could clog fish gills, cause algal bloom and decline in plankton population.

The Philippine Institute of Volcanology and Seismology said the lahar flow on Sunday was detected by seismic and infrasound stations of the Bulusan Volcano Network along Calang Creek in Barangay Cogon, Irosin.

April Dominguiano, Bulusan resident volcanologist, said the flow consisted of only a small volume but continuous heavy rain could still move the debris on the volcano’s upper slopes.