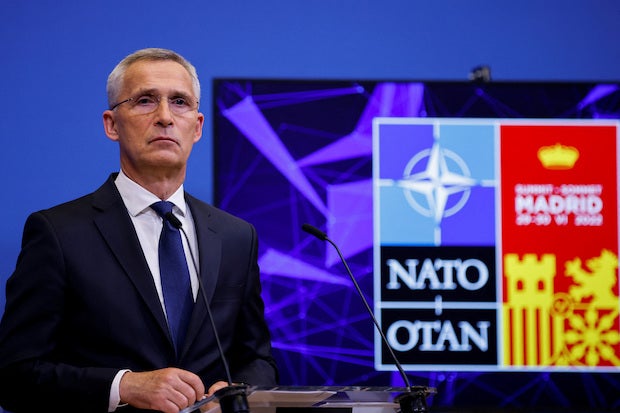 NATO Secretary General Jens Stoltenberg speaks during a news conference ahead of a NATO summit that will take place in Madrid, at the Alliance’s headquarters in Brussels, Belgium June 27, 2022. (REUTERS/Johanna Geron)

BRUSSELS — NATO will boost the number of troops on high alert by more than sevenfold to over 300,000, its secretary-general said on Monday, as allies prepared to adopt a new strategy describing Moscow as a direct threat four months into the Ukraine war.

Russia’s February invasion of Ukraine has sparked a major geopolitical shift in the West, prompting once neutral countries Finland and Sweden to apply to join NATO and Ukraine to secure the status of a candidate to join the European Union.

“Russia has walked away from the partnership and the dialogue that NATO has tried to establish with Russia for many years,” NATO Secretary-General Jens Stoltenberg said in Brussels ahead of a NATO summit later this week in Madrid.

“They have chosen confrontation instead of dialogue. We regret that – but of course, then we need to respond to that reality,” he told reporters.

The June 28 to 30 NATO summit comes at a pivotal moment for the alliance after failures in Afghanistan and internal discord during the era of former US President Donald Trump, who threatened to pull Washington out of the alliance.

Stoltenberg said NATO in the future would have “well over 300,000” troops on high alert, compared to 40,000 troops that currently make up the alliance’s existing quick reaction force, the NATO Response Force (NRF).

The new force model is meant to replace the NRF and “provide a larger pool of high readiness forces across domains, land, sea, air and cyber, which will be pre-assigned to specific plans for the defense of allies,” a NATO official said.

Stoltenberg said NATO combat units on the alliance’s eastern flank nearest Russia, especially the Baltic states, are to be boosted to brigade level, with thousands of pre-assigned troops on standby in countries further west like Germany as rapid reinforcements.

“Together, this constitutes the biggest overhaul of our collective deterrence and defense since the Cold War,” he said.

The NATO official, who spoke on condition of anonymity, said the moves would enable NATO to respond with more forces at short notice should the need arise.

The official added that the precise scale and composition of the force were still being worked on and that the transition was planned for completion in 2023.

At the summit, NATO will also change its language on Russia from the current wording, enshrined at its Lisbon summit in 2010, describing Moscow as a strategic partner.

“I expect the allies will state clearly that Russia poses a direct threat to our security, to our values, to the rules-based international order,” Stoltenberg said.

At the same time, Stoltenberg dampened hopes for a breakthrough at the summit to overcome Turkey’s opposition to the membership bids of Sweden and Finland.

“I will not make any promises or speculate about any specific timelines. The summit has never been a deadline,” said Stoltenberg, who is scheduled to meet the leaders of all three countries in Madrid on Tuesday.