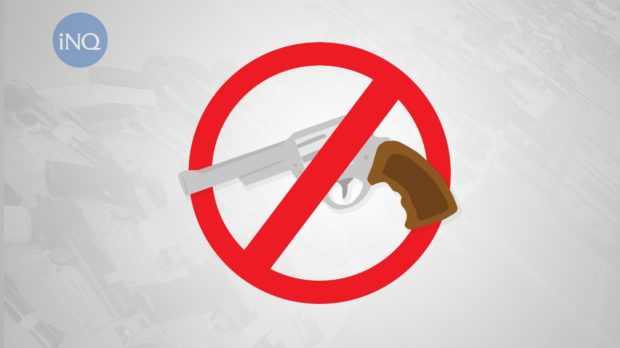 MANILA, Philippines – The six-day gun ban in Metro Manila started on Monday as a security measure for the inauguration of President-elect Ferdinand “Bongbong” Marcos Jr. on June 30.

The Philippine National Police (PNP) said the gun ban — or the suspension of permit to carry firearms outside residence — will be in effect until July 2 in order to thwart any criminal elements or lawlessness to taint the inauguration.

“Generally, rule-of-thumb naman, [the goal of the gun ban] is to thwart criminal elements, lawlessness — to thwart ‘yung possible lawlessness that can be attributed to the use of firearms and other deadly weapons—in relation sa ating activity,” he said.

ADVISORY: The Permit to Carry Firearms Outside Residence (PTCFOR) is SUSPENDED from June 27 to July 2, 2022 for the…

(Generally, rule-of-thumb is that the gun ban is meant to thwart criminal elements, lawlessness — to thwart possible lawlessness that can be attributed to the use of firearms and other deadly weapons—in relation to the inauguration.)

For now, the PNP is still gathering information and plans for the guidelines of the gun ban implementation, including rerouting, traffic plans, Alba said.

He added that an interagency press conference will be held on Tuesday to review the guidelines the PNP will enforce for the preparation of Marcos inauguration.

The National Capital Region Police Office (NCRPO) earlier said that over 15,000 personnel from the PNP, the Armed Forces of the Philippines, and other government offices have been deployed to secure the inauguration of Marcos on June 30.

Several road closures, as well as a no-fly zone for drones and aircraft over the one-kilometer radius of the National Museum will also be implemented, while ports and waterways near the establishment have also been inspected, the NCRPO earlier said.

The PNP also said it is exploring the possibility of using oversized LED screens and billboards for the broadcast of the June 30 inauguration to keep crowd size at the venues manageable. — Christine Annie Asistio, INQUIRER.net intern

Read Next
Taiwan, United States to hold trade talks Monday
EDITORS' PICK
What to watch out for when selecting a video surveillance solution
Heads may roll at BOC, says Palace if sugar smugglers are allowed to use recycled import permits
vivo brings to the Philippines a powerful smartphone with a slimmer body, the vivo Y02s for only PHP 6,499
DOH reports increase in daily COVID-19 deaths, mostly unvaxxed
Palace: Biggest supermarkets in PH commit to sell sugar at P70 per kilo
House energy committee chair Arroyo bats for cheap electricity
MOST READ
DepEd to give teachers P5K cash allowance within first week of classes
GSIS cool to idea of lowering retirement age in PH
Alyssa Valdez to miss Creamline’s AVC Cup campaign
DOJ indicts bank officer in $2.1 billion Wirecard fiasco
Don't miss out on the latest news and information.