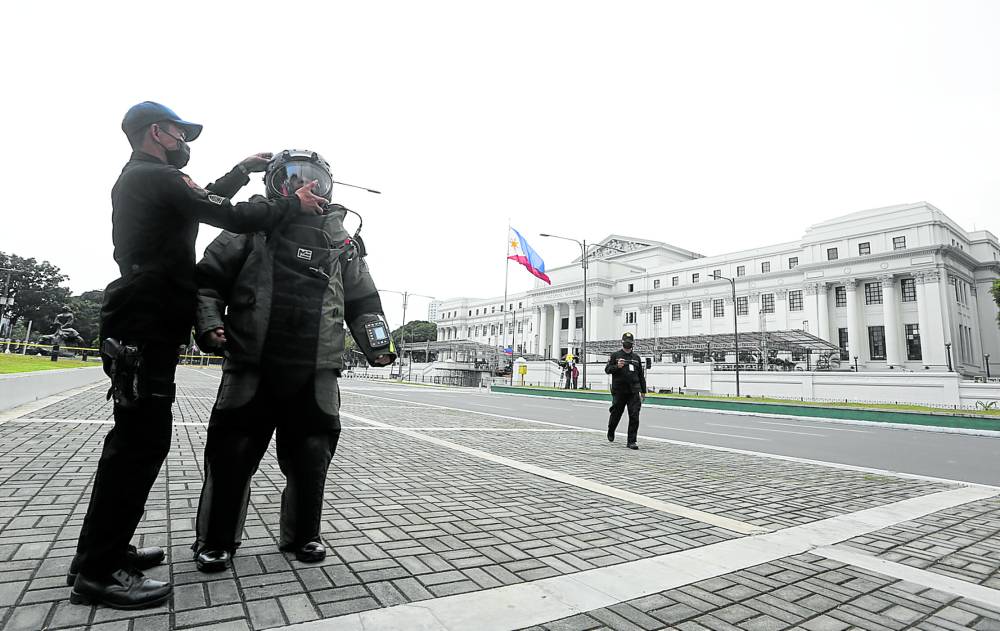 Members of the Explosive Ordnance Division of the Manila Police District hold a drill responding to a bomb threat in the vicinity of the National Museum in Manila on Monday, June 20, 2022, days before the inauguration of President-elect Ferdinand Marcos Jr. at the historic building. (File photo by NIÑO JESUS ORBETA / Philippine Daily Inquirer)

MANILA, Philippines — Over 15,000 personnel from the Philippine National Police (PNP), the Armed Forces of the Philippines (AFP), and other government offices have been deployed to secure the inauguration of President-elect Ferdinand “Bongbong” Marcos, the National Capital Region Police Office (NCRPO) said.

Natividad said the deployment aims to block any alleged plans by the Communist Party of the Philippines (CPP) and its front organizations to disrupt the event.

“We in NCRPO berates this attempt of the leftist organizations to taint the peace and order in the incoming inauguration. We will provide all the necessary security and safety operations to ensure the successful conduct of the said occasion,” Natividad said in a statement on Wednesday.

(Our police officers are ready to provide security and maintain peace and order at the incoming inauguration of our new president.)

The deployed 15,213 personnel is significantly higher than the initial projection of 6,200 police officers to secure National Museum grounds, along Padre Burgos Avenue in Manila, where Marcos is expected to take his oath of office on June 30.

(Whatever plans are made by leftist groups, we ensure that this would not affect the program in any way.)

(I am also asking for the public’s cooperation, hoping that they would not be duped and be carried by statements from these groups should they ask you to disrupt the inauguration.)

On Tuesday, DILG spokesperson and Undersecretary Jonathan Malaya said they received intelligence reports on the alleged plan by the CPP and its armed wing, the New People’s Army (NPA) to disrupt Marcos installation as President.

Malaya was referring to claims made by alleged former members of the CPP and the NPA that communist rebels have been meeting with farmers in Hacienda Tinang and other farmlands in different areas to launch protests when Marcos takes his oath.

Hacienda Tinang is the controversial Tarlac farmland that was dragged into controversy after agrarian reform beneficiaries and their allies were arrested for supposedly uprooting existing plantations.

The DILG also took note of the claim of former senator and now chief legal adviser-designate Juan Ponce Enrile that “groups in America and in the Philippines” are planning to embarrass the President-elect.

As of now, no major opposition group has announced any plan to rally on June 30, except for the Bagong Alyansang Makabayan, which called for a press briefing on Thursday to discuss their protest.

The PNP also reminded the public that protests without permits would only be allowed in freedom parks.

PNP director for operations Maj. Gen. Valeriano de Leon also clarified that the PNP is not against free speech but is only cautious of plans to disrupt Marcos’ big day.