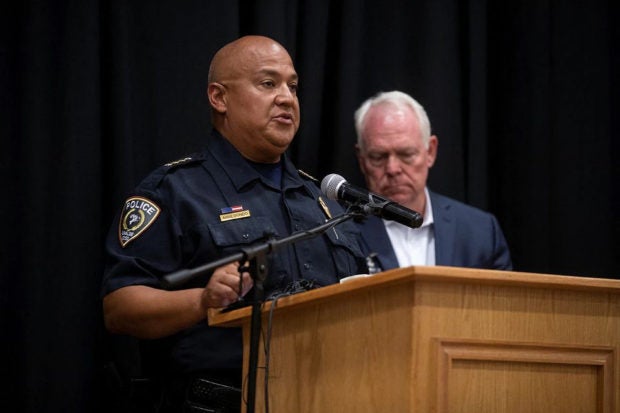 The Texas school district police chief who has come under withering criticism for the police response to the Uvalde school massacre has been placed on administrative leave by the district and could lose his position on the Uvalde City Council.

Chief Pete Arredondo was in charge of the massive, multiagency police response to the May 24 rampage, officials have said, when a man armed with an AR-15 semiautomatic rifle slaughtered 19 school children aged 9 to 11 and two teachers.

As many as 19 officers waited over an hour in a hallway outside classrooms 111 and 112 before a U.S. Border Patrol-led tactical team finally made entry and killed the shooter.

Police practice generally is to immediately confront a school shooter, even if it puts officers’ lives in danger. The director of the Texas Department of Public Safety said Arredondo made “terrible decisions” that cost valuable time.

The shooting at Robb Elementary School rocked the United States and revived the debate about guns in America. In response, the U.S. Senate on Tuesday took an initial step toward passing the country’s first major gun-control legislation in decades.

The school where the shooting took place will be demolished, Uvalde’s mayor said.

On Wednesday, school district superintendent Hal Harrell said in a statement he had placed Arredondo on administrative leave as the school district police chief and replaced him with a lieutenant.

Arredondo defended his actions in an interview with the Texas Tribune published on June 9, saying his primary concern was to save the lives of as many teachers and students as possible. But he said officers on scene could not find a key to unlock the door until 77 minutes after the massacre began.

He also told the Texas Tribune he did not consider himself incident commander at the scene and did not order police to hold back. His lawyer, George Hyde, told the Tribune another one of the local, state or federal agencies to arrive on the scene should have taken over command.

But Steven McCraw, the head of the Texas Department of Public Safety, said Arredondo was in charge and labeled the police response “an abject failure” for not intervening immediately.

McGraw told a Texas Senate hearing on Tuesday that the door was unlocked and there was no evidence officers tried to see if it was secured while others searched for a key. Meanwhile at least two children inside used cellphones to call for help.

Arredondo, who has kept a low profile amid public outrage in recent weeks, will have to start showing up to city council meetings or he could be removed from that post as well.

The rest of the city council on Tuesday denied a request for a leave of absence by Arredondo, who missed the meeting. If he misses three straight meetings, the council can remove him, as some members of the public demanded on Tuesday.

Arredondo, 49 and a career law enforcement officer, was elected to the city council shortly before the massacre.

Earlier Wednesday, Texas state Senator Roland Gutierrez, a Democrat who represents Uvalde, sued the state’s Department of Public Safety for access to the complete records of the shooting, saying the response to the massacre “has been full of misinformation and outright lies” from the start.