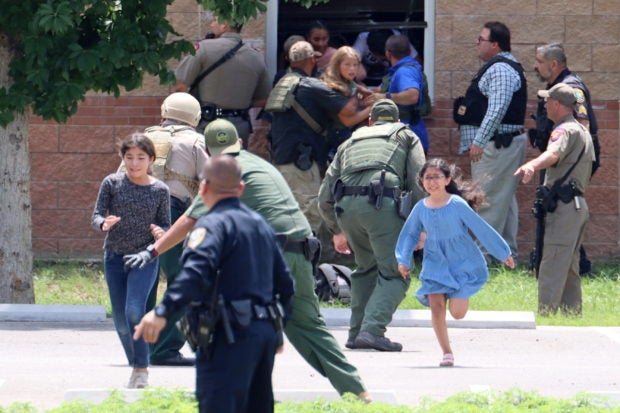 Children run to safety after escaping from a window during a mass shooting at Robb Elementary School where a gunman killed nineteen children and two adults in Uvalde, Texas, U.S. May 24, 2022. Picture taken May 24, 2022. (Pete Luna/Uvalde Leader-News/Handout via REUTERS)

UVALDE, Texas  – Investigators in Texas were seeking to determine on Saturday how critical mistakes were made in the response to the deadly Uvalde shooting, including why nearly 20 police officers remained outside a grade school classroom as children placed panicked 911 calls for help.

Why the officers waited in the hallway nearly an hour before entering and fatally shooting the gunman is at the heart of an ongoing probe by the Texas Department of Public Safety into the massacre of 19 children and two teachers in the deadliest U.S. school shooting in nearly a decade.

Investigators are also still searching for a motive for the attack. Salvador Ramos, a high school dropout, had no criminal record and no history of mental illness, although threatening messages he sent on social media are now coming to light.

At least two children placed 911 calls from a pair of adjoining fourth-grade classrooms after 18-year-old Ramos entered on Tuesday with an AR-15 semi-automatic rifle, Colonel Steven McCraw, director of the Texas Department of Public Safety, said earlier this week.

In all, at least eight calls to emergency services were placed from inside the room while law enforcement waited in the hallway.

The on-site commander, the chief of the school district’s police department, mistakenly determined at the time that Ramos was barricaded inside and that children were no longer at immediate risk, giving officers time to prepare, McCraw said.

“It was the wrong decision, period,” McCraw said, acknowledging that standard law enforcement protocols call for police to confront an active school shooter without delay, rather than wait for backup or more firepower.

Border Patrol tactical agents at the scene were frustrated with a lack of clear direction from the commander, believing it delayed efforts to end the attack, a person familiar with the matter said.

When the Border Patrol agents entered the classroom behind a ballistic shield, the shooter emerged from a closet firing at them, the person said. Ramos was shot and killed.

The memorial in the main square of Uvalde, a town of 16,000 people west of San Antonio, was busy on Saturday. Families lingered around the fountain and placed flowers, balloons and stuffed animals at 21 crosses erected to honor the dead. Kids wrote messages on the sidewalk in chalk.

President Joe Biden, a Democrat who has urged Congress to approve new gun restrictions following the shooting and a massacre just 10 days earlier at a grocery store in Buffalo, New York, will visit Uvalde on Sunday to pay respects to the victims.

Texas Governor Greg Abbott, a Republican and staunch gun rights proponent who addressed the NRA meeting in a pre-recorded video on Friday, criticized the police response at a subsequent news conference, saying he was “livid about what happened.”

In addition to officers waiting in the hallway, McCraw described other moments when Ramos might have been thwarted. A school officer, responding to calls about an armed man who crashed a car at the funeral home across the street, drove past Ramos as he crouched beside a vehicle on school property. Police have said Ramos fired at two people standing outside before scaling a fence onto school grounds.

With criticism of the response by law enforcement growing, police officers from cities as far away as Houston and Dallas have arrived in Uvalde to help support local authorities, in some cases providing protection to Uvalde’s own police, the mayor and the gun shop where Ramos purchased two semi-automatic rifles.